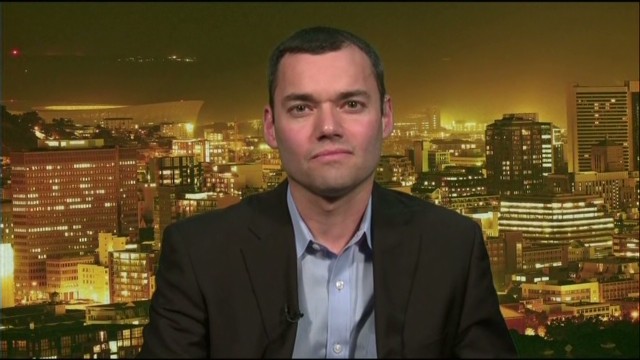 Peter Beinart: ‘Willingness to embrace soccer’ reflects a ‘shift’ in the U.S.

CNN’s FAREED ZAKARIA GPS features an interview with Peter Beinart, associate professor of journalism and political science at the City University of New York and a contributor to The Atlantic. In the interview, Beinart disagrees with Ann Coulter’s view that U.S. interest in soccer is a sign of moral decay, and instead, argues that it is a sign of globalization.

ZAKARIA:  Tuesday’s World Cup match was record breaking in terms of live streams and probably lost productivity in the United States for a soccer game.  Even though the U.S. has bowed out of the tournament, this country is certainly now a soccer nation.  And that scares conservative commentator Ann Coulter, who says the growing interest in the sport is a sign of the nation’s moral decay.

My next guest sees things a little differently.  He is the associate professor of journalism and political science at the City University of New York and a contributor to “The Atlantic.”

Peter, you say that people like Ann Coulter are worried about this and are distressed about it because it wears away at the fact that the United States has been a kind of country apart from essentially the entire rest of the world on this one issue, on this one sport.

And I think what you’re seeing with soccer is the willingness to embrace soccer and allow America’s new immigrants to remain soccer fans without that compromising their Americanism, reflects a shift in the United States.  We have a less nativist sports culture, and are more open, at least some groups in the United States, young people, immigrants, political liberals are more open to liking the same kinds of things that people in other countries do.  Things don’t have to be ours and ours alone.

ZAKARIA:  And in a sense, part of what the attraction of soccer is, is that you are sharing the sport with the rest of the world, sharing the enthusiasm, you know, following something everybody in the world is following.

Now Ann Coulter may see that as pessimism and defeatism and declinism.  But I actually think what it reflects is a more cosmopolitan temperament, a more of a recognition that America has things to learn from the rest of the world and that in fact perhaps we have if we’re going to remain a successful country.

ZAKARIA:  Now the kinds of people you were describing as soccer fans in the United States, a younger immigrants, children of immigrants, this all sounds a little bit like this sort of Obama coalition .

BEINART:  That’s exactly right.  And in fact if you look at the states where soccer is most popular, they’re overwhelmingly blue states, and the states where soccer is least popular are red states. The only difference between the soccer coalition and the Obama coalition is that African-Americans are right now are not such big soccer fans and of course important parts of the Obama coalition.  So African-Americans have a disproportionate devotion to basketball if you look at the polls.

So you can see the Obama coalition as essentially soccer plus basketball.  The Republican coalition is essentially baseball plus golf plus NASCAR and then football is our one bipartisan sport, because that’s the one that everybody loves.

ZAKARIA:  And you really do see this as part of a broader shift where you’ve been tracking the numbers, that the kinds of things that define American exceptionalism are declining particularly among young people, right?

BEINART:  Right.  So, for instance, if you look at religiosity, which has historically been a dividing line between America and Europe, you find that amongst younger people there’s much less of a stark divide, not because Europe has changed, but because younger Americans are much less likely to be affiliated.

If you look at question about patriotism or even chauvinism, is our you also find that the gap that exists among older Americans is virtually disappeared for younger people.  And I think this is the openness to the embrace of soccer.  It’s the same reason that younger people are far much more likely than older to say they like the United Nations.

There’s a willingness to accept the idea that America is one of many nations.  Yes, we have a special affinity for it, but it doesn’t mean that in some objective sense us and everything that we do are necessarily better.  You know, in a way I think that famous and much attacked line of Barack Obama as you remember where he said, you know, I believe that America is exceptional and the Greeks think that Greece is exceptional, which the conservatives attacked him so for.  I think actually a larger and larger number of Americans, especially young Americans, that’s basically their view, too.

ZAKARIA:  And finally, what do you say to people who say I think Ann Coulter among them, that soccer is just boring?  That they play for two hours, and it’s 0-0 at the end of it.

BEINART:  Well, look, you and I both come from families where people play cricket, right.  They play five days into a draw.

So, the truth of the matter is, these things are subjective.

It is hard, if you didn’t grow up with your father, your mother, your grandparents watching the game as a child, it’s always hard to have the same emotional connection you to do to games that grew up or were part of culture of the fabric of your life.  I think that’s actually true.

But in a way this is good.  This is what Americans need to do.  Americans need to be willing to learn, to put in effort, to realize that there are things that don’t come naturally to us.  And I think that’s actually part of the spirit that America needs particularly at this moment of globalization at a time when America is the power dynamic is shifting and Americans have to be able to learn from the world and compete in a new way.