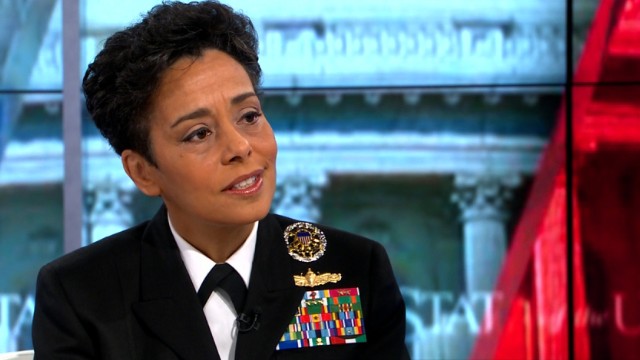 Today on CNN’s State of the Union with Candy Crowley, Vice Adm. Michelle Howard, 38th Vice Chief of Naval Operations, spoke to Crowley in a CNN exclusive about becoming the Navy’s first female and African-American four-star admiral, the crisis in Iraq, and the rescue of Captain Phillips.

CROWLEY: It took 236 years but just this past week Michelle Howard became the Navy’s first female four-star admiral. I am happy to be joined right now by Admiral Michelle Howard. Congratulations.

CROWLEY: It’s also an anniversary week for you…

CROWLEY: …and your first week on your new job as a vice number two in the naval operations.

HOWARD: It’s been a good week.

I want to start talking about something that’s in the news and I’ve seen various military people comment and I wanted to get your thoughts on it. The U.S. was in Iraq, Navy, Marines, Air Force, all those things for eight years and nine months, and now it’s on the brink of a real crisis here, a lot of people think it will either split apart or become a terrorist state.

Is it discouraging to watch the backward steps having fought and lost so much over eight years and nine months.

HOWARD: Discouraging is not the word I would use. And I think we have to think about the world in larger swatches than just the moment we are in. There’s been many a nation that’s moved back and then moved forward again, as they worked their way towards democracy.

So, the good news is the U.S. Navy is in the area, providing intelligence support, and our country’s made a decision to put assessment teams on the ground. So we need to be there and be supportive in ways that can help the country get to stability.

CROWLEY: And in truth, (INAUDIBLE) the U.S. Navy would be where you – I mean it provides surveillance, it could also send planes if the president should decide that perhaps.

HOWARD: We have striking capability, yes.

CROWLEY: You have striking capability in the gulf now?

HOWARD: Yes, we have the “George Herbert Walker Bush” there.

CROWLEY: Yes. Right. Just in general when you look at – we have talked, it seems to be for a decade now, about a different kind of war fare, that we’ve changed from — I think it was Secretary Gates who said, I don’t think we’ll see a land war again in all these places. It’s different now. It’s asymmetric. It’s not state — it’s not nation against nation, but nation against a group of people.

How does a Navy fit into that, especially given the funding that’s being dropped? HOWARD: So what a lot of people have talked to, strategists have talked to, is the uncertainty of the future and what and where the next conflict could look like. What the Navy brings, what the Navy and Marine Corps brings is we are forward present.

We are a globally distributed force. And so then when whatever –

HOWARD: …the next surprise happens, we’re there to respond, we’re — either have a carrier or we have amphibious forces ready to go.

CROWLEY: So, you’re almost a station that can be launched off of in many ways.

HOWARD: Exactly. So, because we’re where we need to be, it gives the commander in chief options immediately.

CROWLEY: I’m going to ask you about being female, being African- American, in the Navy. Such an honor after more than a three-decade career.

I wanted to play for you something that Senator John McCain, whose, you know, is a decorated veteran, one of his sons was in the military in the gulf, and the subject was sexual assault. And he said something that I wanted to get you to respond to. Take a listen.

SEN. JOHN MCCAIN (R), ARIZONA: Just last night a woman came to me and said her daughter wanted to join the military, and could I give my unqualified support for her doing so? I could not. I cannot overstate my disgust and disappointments over the continued reports of sexual misconduct in our military.

CROWLEY: So, here is a man very proud of his military service, of the U.S. military saying, I can’t tell you that your daughter should go into the service. What do you say?

HOWARD: As I’ve traveled this last year, one of the questions I’ve asked my sailors, the ones who are parents, would you tell your daughters to come to the military? And the answer I normally get is absolutely. Absolutely. That speaks to parents who are in the military who feel that it is a great opportunity for both their sons and their daughters. We have to get after this sexual harassment, sexual assault issue, absolutely Senator McCain is correct, but yes, the Navy is the place to come and join.

CROWLEY: And do you – you know, certainly through a three-decade career you’re not unfamiliar with racism, with sexism, with sort of a growth in sexual assault. How do you maneuver through those barriers? HOWARD: I think like most human beings, there’s challenges in our life. And were obligated to, when we – when we have that challenge, confront it, think about it, take a deep breath, but also put it in context. There’s a lot of times in life the barriers get down to one person, and we are smart enough and talented enough and confident enough in working with our shipmates, we can come to resolution.

CROWLEY: I want to just show our audience a couple of the Maersk Alabama scenes and Captain Phillips is the name of the – you were appeared in that as a voice, because that was your operation.

CROWLEY: So my question here is, and I think that’s what you were most known for before you became the first four-star admiral. So, when that was going on and you were in charge of seeing that the ship was saved, that the captain was taken off the boat where he was there with four of the pirates, what worried you the most that night?

HOWARD: Defining the mission correctly. And the mission had to be we would get master – Captain Phillips back safely. And we had a more immediate concern. The life raft he was on was quite rapidly moving towards the shores of Somalia –

CROWLEY: Where you said he couldn’t go.

HOWARD: And we figured once he got ashore, we were not going to be able to get him back.

CROWLEY: Admiral Howard, I would love to sit down and talk with you at great length. You’ve had an amazing career and you continue on. Congratulations again and thanks for being here.

HOWARD: No, no, thank you. Thanks for inviting me.