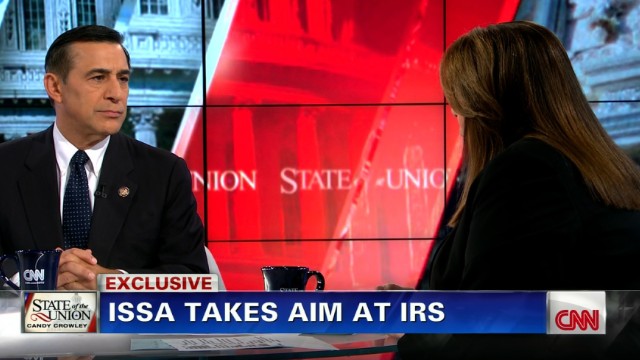 Rep. Issa: “I don’t think anyone… on my committee has ever said she deliberately crashed her computer”

Today on CNN’s State of the Union with Candy Crowley, Rep. Darrell Issa (R-CA),Chairman of the Oversight and Government Reform Committee, spoke to Crowley in an EXCLUSIVE interview about the IRS investigation, Lois Lerner, and other unanswered questions.

In the interview, Rep. Issa commented on the IRS scandal, “I don’t think anyone… on my committee has ever said she deliberately crashed her computer.”

CROWLEY: But, first, we want to talk to the dogged chairman of the House Oversight Committee, Darrell Issa.

Thank you for being here. I know it was a long flight from the West Coast, but we appreciate it.

ISSA: Well, I guess I’m a dogged flyer, too.

Let’s first go to the e-mails, two years’ worth. You have been given some — over 20,000 of them have been retrieved through other ways, the people she sent them to, et cetera. Did Lois Lerner crash her own computer?

ISSA: Well, we will probably never know that. The drive is physically gone.

What we do know from the discovery we have gotten, from e-mails that we have gotten from multiple sources is, she broke some regulations. She broke some laws. She sent — trying to get prosecution apparently, she sent 1.1 million tax records over to the Department of Justice, including inappropriate or actually illegal 6103 disclosures on behalf of conservative groups.

CROWLEY: But, in the end, I thought you had said, listen, she clearly did this so that we couldn’t have these records. So you can see that this could have been a computer crash and it lost her stuff?

ISSA: We never — I don’t think anyone has — on my committee has ever said she deliberately crashed her computer.

Obviously, she had a — 30 years of experience. She knew under the Federal Records Act that she had an obligation for these documents to be preserved, these e-mails. And to not have print to paper, which is the policy that she had to know, is pretty hard to believe that there aren’t paper copies.

So do I believe that she printed to paper? Yes. She’s an attorney of long standing. And it’s kind of hard to believe that you wouldn’t cover with your own paper copies.

CROWLEY: So you do believe that she printed the paper and has those documents? I think her attorney has already said she didn’t.

ISSA: Well, her attorney has said things and been not correct, or disingenuous, or outright lied a number of times, and it’s been shown by e-mails.

Look, an attorney trying to get his client off the hook after flubbing the taking of the Fifth certainly will say and do a lot of things, but they’re not held accountable. Ultimately, what we know is, the archivist said that the IRS failed to do what they were supposed to do in informing, failed to properly keep documents.

So, we’re kind of a long way from the original investigation, which is, did this unit unfairly target conservative groups? Do you have proof-positive of that? And what is it?

ISSA: We published a 375-page report that details how her unit, headed by her, e-mails from her, show that, in fact, they were targeting conservative groups only for their beliefs.

Now, there were other groups that were caught up by name.

ISSA: But, of course, ACORN had already been a criminal organization that was trying to reconstitute.

So, did we publish a report? Are we continuing to go after the truth, which is, who all else besides Lois Lerner was involved in leading the charge to unfairly treat groups? And, of course, just the other day, we got into the Grassley situation, where a rather obscure invitation arrives, and instead of forwarding it on to the senator, what does she do?

She tries to turn it into a possible criminal prosecution, based on an invitation from a group.

CROWLEY: Well, I want folks — since you brought this up, this is Senator Grassley, who had — for some time was ranking Republican or chair of the committee on the Senate side that oversees the IRS. The two knew each other. They both got invited apparently to the same thing.

But their invitations got switched. And she saw that this unnamed group was offering to also pay for his wife. So, she sends a message to another IRS official that says, well, it looked like they were inappropriately offering to pay for his wife. Perhaps we should refer to exam, people that look at audits or look at information.

And the reply was: “I’m not sure we should send an exam. I think the offer to pay for Grassley’s wife is income to Grassley, and not prohibited on its face.”

She asked a question. It’s answered. End of story. Why is that so crazy?

But this is a woman who, from ’86 on, headed the Federal Election Commission’s enforcement. She knew the law probably better than anyone on Earth. This is somebody who should have been able to answer a question, not ask a question. But, more importantly, if you take all of this, what you see is a pattern of behavior that goes back to the original problem, which is, she leaks in an ABA conference, I.G. investigation, tries to push blame on to Cincinnati. Eventually, we’re — in spite of the White House, we’re able to show that in fact it isn’t Cincinnati, but it’s her and her unit in Washington.

CROWLEY: So, your one piece of proof — let me first ask you, has any of this been connected directly to the White House?

CROWLEY: But no evidence linking any of this to the White House? So…

That’s what the commissioner played. I know of no violation. What we do is, we follow the facts. As we get to the facts, we then follow additional facts. The facts show that William Taylor’s client, Lois Lerner, is, in fact, pivotal to this unfairly treating conservative groups.

We want to get that done and close it up. All this other information is part of what in Washington becomes interesting cover-up and diversion. The fact is, the IRS — we should all be scared, Candy, that the IRS can do this kind of unfair targeting to anybody.

CROWLEY: So — but can you give me just the one fact that you go, here it is, here’s our smoking gun, this proves Lerner targeted only conservative groups, singled them out, asked them inappropriate questions?

Is there a single piece of evidence that you can show me right now?

ISSA: We sent your people almost 400 pages of a report.

ISSA: And that details, item by item, e-mail by e-mail statements that she made vs. other people.

The nature of the beast, just like a — just like a criminal prosecution, is that you build a case. The fact is, our investigators have done all they can do so far. We’re — you know, it was only a couple of days ago that we learned that, in fact, 1.1 million documents were unlawfully disclosed to the Department of Justice, and begs the question of the purpose.

Why send all that documents? Some of it was publicly available. The rest of it was never to be sent.

CROWLEY: It’s not that there aren’t questions. I mean, questions — because there are, and there’s suspicious timing and there’s all kinds of things you could point to.

But is there a fact that you can point to that says right here in this e-mail, she says, go after these groups; I want you to particularly go after conservative groups, you know, harass them, whatever?

Is there a direct piece of information you can point to?

ISSA: It’s a case file that’s built, including her wanting to — musing about working for the president’s 501(c)(4), Organize for America.

The reality is, the Ways and Means Committee has prepared criminal charges and referred them. We have built a fairly extensive, if you will, dossier of wrongdoing that, individually and cumulatively, adds up to wrongdoing.

Ultimately, what we’re trying to, remember…

ISSA: … is get the IRS to have safeguards, so this doesn’t happen again.

And now what we know is, get the IRS and the rest of the government to keep records at least as long as they would have you keep them when they ask you questions.

CROWLEY: Would you — a year ago, when we talked, you said, we’re going to release the testimony, more than 40 witnesses, on this specific issue of whether there was a conspiracy to go after these conservative groups.

We haven’t seen them yet. Will you release those interviews?

ISSA: You know, that was an interesting back-and-forth you and I had, where you objected to us releasing part.

That nearly 400-page report, it cites specific examples. The investigation is ongoing. No investigator releases all of their stuff, if you will, all their questioning.

And I will just give you an example. One witness under oath told us that he was told to read another person’s transcript which had been released in preparation for our interview. That should scare you when people are being coached using other interviews.

So do we want to keep this until we’re done? Of course. Now, Mr. Cummings has the ability to release anything he wants from there. It’s not a question of secret. It’s a question of process. If you will find a defense prosecutor, a U.S. attorney who will tell you he will just release all the transcripts while he’s still getting ready to go to trial, then I will do it, too. CROWLEY: And you’re getting ready to go to trial, as you see it?

As a matter of fact, as you know, he still has a person who is a very generous donor to President Obama and doesn’t see a conflict, as nothing comes out of this case, even though we see a lot coming out of this case.

CROWLEY: I have got to run.

Thank you so much for coming by.

CROWLEY: We appreciate it, Mr. Chairman.