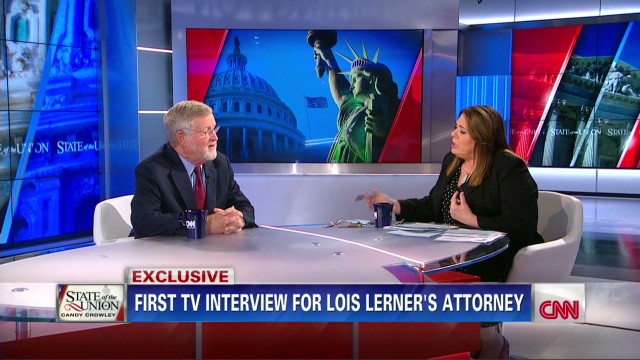 Lois Lerner atty.: “It’s convenient to have a demon”

Today on CNN’s State of the Union with Candy Crowley in a CNN EXCLUSIVE, Lois Lerner’s attorney William Taylor III responded to Rep. Issa in his first television interview. Taylor spoke to Crowley about Lerner’s side of the IRS scandal and why she remains silent.

For more information, check out the following blog post.

Lerner attorney: Client vilified by GOP out of convenience

CROWLEY:  Lois Lerner is still silent, but, today, her attorney steps into the limelight, for the first time on TV, to tell us what happened to those e-mails.

William Taylor, you are here with us exclusively.  And I thank you so much for being here.

WILLIAM TAYLOR, ATTORNEY FOR LOIS LERNER:  Nice to be here.

CROWLEY:  So, what is her story?  I know you’re in frequent contact with her.  What did she say happened to those e-mails?

TAYLOR:  Well, it’s not just what she said.  The record that was created at the time in terms of e-mails is undisputed.

She walked into the office one day, and her screen went blue.  She asked for help in restoring it.  And the I.T. people came and attempted to restore it.  They even went so far as to send it to another expert to try to restore the e-mails.

CROWLEY:  Are all of them irretrievable?

CROWLEY:  I think that’s what is sort of blowing people’s minds, is, we get it that computers crash.  But to then say, you know what, we couldn’t get it, and so then we shredded the hard drive, you know, as an attorney, that that’s one of the things you would pounce on and go whoa, whoa, whoa, wait a minute.

TAYLOR:  But, you know, you do the best you can under the circumstances.  Nobody was thinking about trying to keep anything from being discovered.

She was as upset as anybody else was about the loss of the e-mails and the other documents which were on there, which were quite important to her.  But the truth is, this — this was one of those things that happened.  At the time, she did everything she could to retrieve it.  She reported it right away, and that’s the story.  That’s all there is to it.

CROWLEY:  And you — but you understand why it seems suspicious, because this covers a period of time when the activity that was the original point of this investigation was going on.

That is, were these conservative groups being targeted by her unit at the IRS?  You say you think it’s a little brazen to suggest that she did this on purpose, but you do get the suspicion?

TAYLOR:  Well, I get that it’s convenient to create suspicion.

Actually, the e-mails that are missing are way before the time in which Congressman Issa and his colleagues are suggesting that there was — there was unfairness or anything like it at the IRS.  The truth is, these e-mails predate most anything that’s of any relevance to anybody.

CROWLEY:  I believe Chairman Issa called her a liar, and maybe you as well.

TAYLOR:  He called me — he called me one, too.  And I won’t respond to that, except that — except to say he’s wrong.

It’s convenient.  This is an election-year politics.  It’s convenient to have a demon that they can create and point to.  Let me tell you something basic about this.  People who want to give money to elections and do so in a tax-free way have to submit themselves to the scrutiny of the IRS to be sure that they’re complying with the rules that limit political activity.

CROWLEY:  Did your client violate the paperwork — federal paperwork law?

TAYLOR:  No. She did exactly what the IRS required that she do.

CROWLEY:  But she didn’t back up her e-mails, which was IRS — you’re supposed to print out things.

TAYLOR:  She printed out some things, not others.  You can’t print out hundreds of thousands of e-mails.  We will be back — we will be back to the days…

TAYLOR:  You know, what is a federal record is a subjective question.  Not — I’m sure not everything, but she printed out a lot of things.  But the…

CROWLEY:  Has it been turned over?

TAYLOR:  Sure.  Everything has been turned over, and over and over.

CROWLEY:  And let me ask you just a really basic question that I think — I know that invoking your Fifth Amendment rights not to incriminate yourself and not to testify is a basic American right.  And I understand that.

You also know that people look at someone who says, I didn’t do a anything, I’m totally innocent, and say, then why don’t you get on up there and talk to these guys and end this thing?

TAYLOR:  Because there was no pretense that this would be a fair process.

From the beginning, the Republican majority has screamed, without any evidence, about things that she did, and made it clear that…

TAYLOR:  … the only purpose of having her there would be to vilify her.

CROWLEY:  But, even if it’s not fair, if she’s done nothing wrong, why would she incriminate herself?  Go up there, do it, and have it done.

TAYLOR:  If she’s done nothing wrong, she doesn’t need to be subjected to the kind of bullying that goes on in that committee.

CROWLEY:  And, finally, I want to ask you, have there, in fact, been death threats against your client?  Are they recent?

TAYLOR:  Not so — not so recent, but there certainly have been death threats against her and her family, which have required an FBI ongoing investigation.

CROWLEY:  Is she being protected?

CROWLEY:  You feel reasonably secure of her safety?

TAYLOR:  I don’t think you can ever feel secure about anybody’s safety these days.

But she has to go on living her life, notwithstanding what’s happened to her.  She’s been made to be a villain in a way that’s very, very unfair.  She’s — she’s a person who did everything she thought was right, and now she’s being blamed for — for things which aren’t really even scandalous.

CROWLEY:  Bill Taylor, attorney for Lois Lerner, I hope you will come back and talk to us as this goes on, as I’m sure it will.  I appreciate your time.