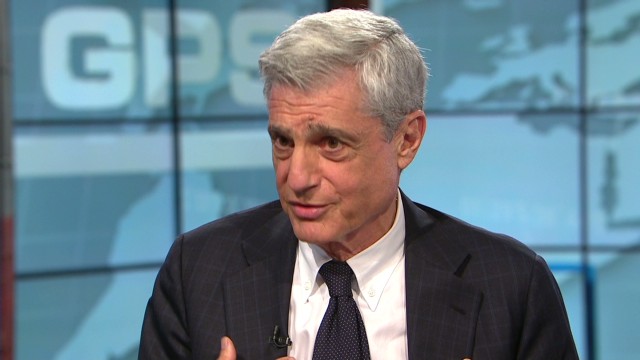 CNN’s FAREED ZAKARIA GPS features an interview with the former U.S. Treasury Secretary under George W. Bush, Henry Paulson, and the former U.S. Treasury Secretary under Bill Clinton, Robert Rubin.  Paulson and Rubin speak with Fareed about their new report on the future of our environment if Americans do not start taking preventative measures against climate change, the cost of inaction, and the limitations to progress posed by Washington. Additionally, Paulson and Rubin also speak with Fareed about the U.S. fiscal outlook and economic recovery.

A transcript and videos from the discussion are available after the jump.

FAREED ZAKARIA, HOST: According to an important, dramatic new report, the future could be bleak for most Americans. By mid-century, it says, 23 billion dollars of property will likely be underwater (literally) in Florida alone. Crop yields in the Midwest will probably be down 50 to 70 percent. Americans will likely experience 2 to 3 times as many days with temperatures above 95 degrees as they do today.  All this, the report’s authors say, if we don’t do something about climate change now. And the report has serious pedigree. It was released this week by an organization, called “Risky Business.” Joining me now to talk about it are two former treasury secretaries, one from either side of the aisle, who are both heavily involved in the “Risky Business” organization.  Hank Paulson is a co-chair of the group. He was the 74th treasury secretary, serving under President George W. Bush. And Robert Rubin is a member of the organization’s “Risk Committee” and was 70th secretary of the treasury, serving under President Clinton. We will talk to both about the U.S. economy in a moment, but let’s start with their new report.  Gentlemen, thank you so much for joining me. The most interesting thing about this report is the sort of idea of the cost of inaction and what would be the cost of doing nothing. And you say it’s pretty high.

HANK PAULSON, FORMER TREASURY SECRETARY: Yeah. I think the cost of inaction is quite high, because it’s — it’s actual radical risk taking. There’s a tendency for people to say let’s wait until we get more information. But the longer you wait, you get to a dangerous point — a dangerous position, where the only things you can do then is to adapt to these adverse consequences as opposed to being able to prevent them.  Because one of the things that I think is pretty clear is that if we act soon, we can avoid the most adverse consequences.

ZAKARIA: Hank, in his “New York Times” piece, makes an analogy between the sort of not doing anything and allowing these risks to grow to the situation before the financial crisis, where we — where the United States may have done too little to be aware of these risks and then the whole thing explodes. Do you think that analogy works?

ROBERT RUBIN, FORMER TREASURY SECRETARY: Well, I — I think it was a terrific op-ed piece. I think the analogy tells us something, Fareed, but I think the — the distinction, it seems to me, is that with the financial crisis, virtually nobody — a lot of people saw excesses, but virtually nobody saw the possibility of a mega crisis. Here, we see it and we know that it can be catastrophic.  We must act and yet we’re not acting, except in a limited way.

ZAKARIA: Now, as you know, one of the principal reasons why very little is happening in Washington is that much of the Republican Party really does not — would not agree with virtually anything you’ve said and virtually anything you wrote in that op-ed. How to think about this, what to do about it?

ZAKARIA: But you have a solution, which is a carbon tax, which is completely anathema to Republicans, at least on Capitol Hill.

PAULSON: Yes. What I’ve said about a carbon tax is some people that oppose it are opposing it because they don’t like the government playing a big role. And, you know, the perverse aspect of that is, frankly, those that are resisting taking action now are guaranteeing that the government will be playing a bigger role, because we’re seeing now and we’re going to see an increasing number of natural disasters, Mother Nature acts. We have forest fires, we have floods, we have big storms and storm surges, we have killer tornadoes.  And what happens? When those events occur, one part of society gets hit particularly hard, and government comes in. And that’s the role of government. Government should come in, but we all pay.

ZAKARIA: So a number of people who support the general idea say look, we’re not going to get a carbon tax in the United States and let’s be real, let’s accept the fact that we’re going to have to deal with a lot of second best solutions, which are fuel-efficiency standards, you know, net metering.  Do you think that’s the better path to go? Or is it worth holding out for what seems very improbable?

RUBIN: I wouldn’t frame the issue the way you just did, Fareed. If you — if you have the view, which Hank and I both have, that the risk here is catastrophic and catastrophic to life on Earth as we know it — then that’s a risk we cannot take. And once you start with the recognition that this could be catastrophic, then it seems to me, you do a full court press on all fronts.

ZAKARIA: A lot of people will listen to this and say, we can do all that we want here in the United States, the Chinese and the Indians are building coal-fired power plants every week. The Chinese and Indians, by some measures, build one new coal-fired power plant each week. And that’s going to change the climate no matter what happens in the United States. What do you say?

RUBIN: Fareed, I think the answer to that is not complicated. This is a transnational issue that’s going to affect all of our countries. It is of enormous importance to all of us, I think, as I said, a catastrophic risk. And I think that the way the United States can best contribute is, A, get our own house in order. And by getting our own house in order, put ourselves in a much better position to then work with the Chinese and others around the world so that everybody does what they need to do.

ZAKARIA: I’ll be back in a moment with much more with these two former Treasury Secretaries.

They will give us their sense of the U.S. economy and the outlook ahead when we come back.

FAREED ZAKARIA, HOST: Hank Paulson and Bob Rubin are back with me now to talk about the economy.  I think it would be fair to say that in general, people feel like the American economy is out of the recession, is, you know, that we’re back to employment levels that — that the United States had in 2007. But nobody feels satisfied. What is your sense of the picture of the American economy?

ROBERT RUBIN, FORMER SECRETARY OF THE TREASURY: Yeah, I think — I think my — my reaction, a little bit, is to differ with the premise as you’ve stated it, Fareed. The unemployment rate doesn’t reflect our labor market situation, unfortunately. There—there are the so-called mart— there are all kinds of other groups of people that are not included in the unemployed…

RUBIN: You know, stopped looking for work or people who are part-time employees who would like to work full-time, so that the real unemployment rate, whatever it is, is probably a few percentage points higher than the reported rate.  In fact, what we have is a slow recovery. We’ve had a slow recovery for a long time. It might be heading to be a little bit better, or it may not be. I’m a little less inclined to think it is. But, you know, time will tell. The way to get out of this, the way to move from here to a strong recovery, is through policy. And there’s so much we could do.  You could put in place a — a fiscal program that got rid of the sequester, that had an upfront stimulus, and then, at the same time, real fiscal discipline that deferred the ana — the implementation of for a little while…

ZAKARIA: Spend money now but — but do some structural budget reforms…

ZAKARIA: …for these later so that entitlement programs…

RUBIN: And I think that would have a substantive effect on confidence and so forth. There’s so much we can do.  The problem is, our political system is, as you well know, in dysfunction. Congress is unwilling to act. And I think fundamentally, our future depends, both for the short-term and the long-term, on a recovery of — of effectiveness in our political system, which fundamentally means the willingness of people with different views to engage in principled compromise. And that is — that is how our system works.

ZAKARIA: We would have a stronger recovery if we could enact the Bob Rubin program — stimulus now, cuts later?

HENRY PAULSON, FORMER SECRETARY OF THE TREASURY: Yeah, well, I would say this. I agree with almost everything Bob said, that, that we have a–a very slow recovery, that there are structural problems that, you know, don’t come out in the unemployment numbers. They are more significant.  Again, I believe that they’ll — the — the solution is bipartisan compromise to get some structural things done. I think we need a new tax policy, a tax policy that gives us the revenues we need and lets us be competitive.  I think we — I think trade policy would help. I — I think that immigration reform would make a huge difference. And so as we focus on the budget, we need to do it in a way in which we, you know, we don’t cut so much we hurt the fledgling recovery and we don’t raise taxes so much that we — that we do that.

ZAKARIA: The chair of the Fed says that stock prices are within historical norms. Do you agree or do you think they’re too high?

RUBIN: Fareed, I have no idea, with all due respect to the chairwoman of the Fed, who I have — know well and have a lot of respect for. She doesn’t know either. We certainly have had enormous increases in stock prices, where they may or may not be in excess. I don’t know. But whatever the answer may be as to that, they’ll correct because markets that are overpriced will correct for their own way.

PAULSON: Well, let me tell you, I’m — I am a Republican. And I think you’re seeing a growing number of Republicans that favor immigration reform. I will bet that Republicans are very interested in having a very serious conversation about the risks as — economic risks associated with climate and with a number of economic issues.  And remember, when it came to, you know, the sorts of things I would be suggesting that are structural reforms have to do with health care and Social Security, I think those are major, major structural reforms that are necessary. I think immigration reform is necessary. Tax reform. So I think there are Republicans interested in those things. But…

ZAKARIA: We’ve got to find…

PAULSON: — but remember, there’s a…

ZAKARIA: …somebody to draft you for president. As always, gentlemen…

ZAKARIA: …thank you very much.

ZAKARIA: Coming up next on GPS, we will tackle Iraq. I will try to make you understand why its Prime Minister is behaving the way he is. Hint: he has to worry about HIS Tea Party.