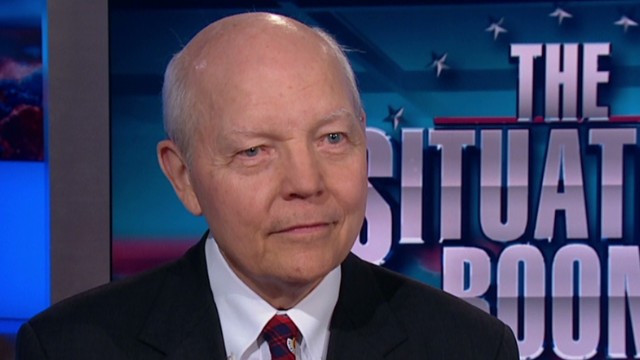 IRS commissioner John Koskinen sat down with CNN’s Wolf Blitzer to answer questions about possible IRS partisanship, missing emails and more. Highlights from the interview are after the jump and a full program transcript is posted on  http://archives.cnn.com/TRANSCRIPTS/sitroom.html.

BLITZER: Because this looks fishy, as you know. The appearance is awful for the IRS right now. I’ll give you an example.

Lois Lerner, she’s the woman who ran this audit division of tax-exempt organizations. She’s the one who pled the 5th, is not — refusing to cooperate, which is her constitutional right, as we all know.

Her computer hard drive, all of her emails crashed 10 days after the chairman of the House Ways and Means Committee, Dave Camp, wrote a letter, asking for specific information and all of a sudden, her emails disappeared. That looks suspicious, right?

KOSKINEN: It is suspicious. When we uncovered it, we pursued evidence to try to figure out what happened. We found a train of emails that the Congress has had for some time that noted that they worked extraordinarily hard to try to recover those emails.

We also know that the crash occurred in June, but we have emails from April of 2011, so it was clear that people weren’t wiping out emails. And we were able to find 24,000 emails from this period. So they all have not been lost.

BLITZER: But the U.S. archivist who testified before the Hill, you saw him probably, testify, he said the IRS, in his words, “did not follow the law in preserving documents as required by the statute for public and official records.”

So someone broke the law.

KOSKINEN: The IRS has run an antiquated response to the Records Act, which everyone treats seriously and that’s because of the email system. Official records in communications are printed out in hard copies. All of the information, about taxpayers and their files, are saved separately.

BLITZER: Will there be a criminal investigation?

KOSKINEN: I don’t think so at this time there’s any evidence of that. And in fact, if Ms. Lerner were destroying emails, she wouldn’t have kept making them, all of the emails you’ve read in public that the House committees have been putting out were all emails she wrote that we provided.

BLITZER: Here’s another suggestion. There are these reports — and I’m sure you’ve seen it. The IRS did have a contract with a private company, Sonasoft, that would keep a backup of all of these emails, but during the period of the missing emails, suddenly that contract was suddenly canceled.

What was up with that?

KOSKINEN: It’s a problem with the piecemeal information getting out. That contract turned out to be for the 3,000 employees in the chief counsel’s office. It didn’t retain records offsite. It allowed it as a disaster recovery system to move emails from one server to another.

BLITZER: What was it canceled?

BLITZER: Why not get different backup system?

KOSKINEN: The general — chief counsel’s office at that time determined they had everything that the outside contractor would provide. At that time, it was possible that somebody could have decided, well, we need a better backup system for the whole agency.

Two years the IRS looked at trying to figure out what would it cost to have a better email agency.

KOSKINEN: I’m familiar with Sarbanes. I didn’t know that particular —

BLITZER: It’s a criminal penalty if they don’t.

So why wouldn’t — if public companies have to do that, why wouldn’t the IRS have to retain important emails for at least five years as opposed to six months, because they’ve been recycling their email, their hard drives every six months or so.

KOSKINEN: I — the IRS process, though, is every important official record gets — is supposed to be printed out. We have 2,000 employees trained to make sure that happens. So the official records of the IRS are printed out and are saved in hard copy and now preserved.

The emails, all emails are not official records. So at this point, the policy for the IRS is to in fact print them out. But that’s an antiquated program and we’re looking at trying to modernize it.

BLITZER: I got a ton of questions. I told my Twitter followers I was going to be interviewing you today, and I asked for some suggested questions.

I got a variation of this one by a lot of folks.

This one from T.G. Parker, why shouldn’t taxpayers use the crashed hard drive excuse when undergoing an IRS audit?

KOSKINEN: A number of them already have done that and the question has been is there a dual standard? And as I said, the IRS has 24,000 Lois Lerner emails from this period. We historically, if a taxpayer has lost electronic records, have said if you have other indications and evidence of what went on, we’ll take that from you. It’s if you lose a document it doesn’t mean you lose the argument. We actually work with taxpayers to say we’ll look at other evidence, like the 24,000 emails. And if we can find any evidence to support your case — and, in fact, if the circumstances support your case, we’ll support you and you won’t have any problems.

BLITZER: Now you’re a Democrat. You’ve given money to Democratic causes. Democratic candidates, including the President of the United States. And so the suggestion is you’re not going to be objective in this kind of investigation.

Reassure the American people that you’re not going to let your partisanship interfere with this investigation.

KOSKINEN: I’ve never been a partisan operative or a political operative. I was actually asked by the Bush administration to come in and work on Freddie Mac.

BLITZER: Because you don’t want the IRS to be here, getting involved in political witch hunts for political reasons. And if, in fact, that occurred, that’s outrageous.

KOSKINEN: That — I couldn’t agree more. I think that, in fact, anytime anyone even suggests internally or externally that the IRS be used for political purposes, that’s outrageous.

BLITZER: You saw the — you saw the email from Lois Lerner suggesting maybe Senator Chuck Grassley of Iowa, Republican, should be audited because of an invitation he got to attend some event, maybe his wife could go along.

KOSKINEN: For years, the IRS internally has had programs that make it impossible for any individual to start an exam. And that’s a proposal that I support strongly —

BLITZER: Is she right to make that — to strike that email? Let’s take a look at Chuck Grassley?

KOSKINEN: I can’t talk about any taxpayer issues. But as I read the email in the press, it’s not clear whether she was suggesting the organization should be examined or the senator should be, but at this point, let me just say no individual, then or now, has the ability to cause an exam to start.

All of what — the vast majority of our exams are all done statistically in terms of going forward. But there are protections. Before an exam starts, several people have to sign off. No individual has the right, the authority and should be allowed to start an exam.