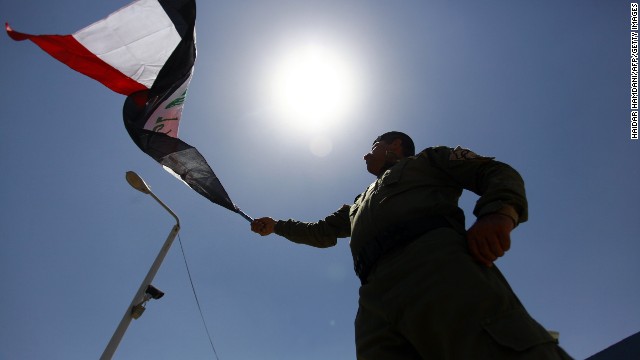 Sen. Rand Paul: “I’m not willing to send my son into that mess” on the crisis in Iraq

Today on CNN’s State of the Union with Candy Crowley, Sen. Rand Paul  (R-KY), member of the Foreign Relations committee, spoke to Crowley about the crisis in Iraq and restoring voting rights to non-violent felons.
A transcript and a video from the interview are available after the jump.

On Iraq: What would Rand Paul do?

Four more Iraqi towns have fallen to ISIS, an Islamist militia that is plowing its way through Iraq on the way to Baghdad, this as the initial group of U.S. military advisers is expected to arrive soon in Iraq.

A rare treat to find you in town, so thanks for being here.

CROWLEY:  Looking at the situation in Iraq as it is now, what would President Paul do?

PAUL:  I think we have to understand first how got here and then we have to decide as a country where we are going.

I think there’s chaos in the Middle East, and I think the chaos is because we have created a vacuum.  Before the Iraq war, I think there was somewhat of a standoff between Sunni and Shiite, had been for maybe 1,000 years off and on.

And now they go back and forth.  So I think our intervention in Syria has led precisely…

CROWLEY:  You know, it may have, Senator.  But when one’s sitting in the Oval Office, you have to think, what do we do now?

PAUL:  I think the first thing you would have to do is follow the Constitution.  The Constitution says that Congress decides.  The president doesn’t have the unilateral authority to begin war.  And…

CROWLEY:  But do you think it is a good idea?

CROWLEY:  Some of your Republican colleagues…

PAUL:  … this is an incredibly important point.

Militarily, we could go back in.  The surge worked.  Obviously, we have the military might and power.  But the country as a whole has to decide, do we want to send 100,000 troops in?  Are we willing to have 4,500 young Americans die to save a city like Mosul that the Shiites won’t even save, that they have fled?

CROWLEY:  What does Rand Paul think at this point?

PAUL:  No ground troops.  I think that we need to see…

CROWLEY:  Right.  And I think most everybody agrees.  How about airstrikes?

CROWLEY:  You know, because by the time you hold a plebiscite and find out how people feel about Iraq, by the time you get Congress to do anything, it is two weeks later, and the ISIS is sitting in Baghdad.

CROWLEY:  So you’re going to have to move pretty quickly here.  But you’re against airstrikes?

But I would first wait to see, are the Shiites going to fight for their country or not?

CROWLEY:  Let me play you something that one of your Republican colleagues said, Senator Marco Rubio.  He was talking about why this is important, and he does believe that national security is at stake.

SEN. MARCO RUBIO (R), FLORIDA:  The reason why we care is because we cannot allow a safe haven to develop there that can be used to carry out attacks that can kill Americans, including here in our homeland.

CROWLEY:  So, do you believe that the ISIS is a national security threat to the United States?

So, those who have been…

PAUL:  Let me — let me finish, because the thing is, is that they would not be empowered and in Iraq if we were not providing safe haven in Syria by arming their allies.

CROWLEY:  So should we go to Syria?  I mean, the thing is, we kind of are where we are.  So, the question is whether they’re a threat.

CROWLEY:  Right.  Many of your Republican colleagues would argue that what we should have done in Syria was get rid of Assad, and that would have stopped ISIS in its tracks.  But…

PAUL:  But — no, but we have done this.  Look at Libya.  We went into Libya and we got rid of that terrible Gadhafi.  Now it is a jihadist wonderland over there.  There’s jihadists everywhere.

PAUL:  It could — well, it could at some point.

I would say, right now, if you are a member of ISIS, you’re looking at the Shiites right in front of you and the battles you are fighting.  I don’t believe that ISIS is right now in the middle of a battle saying, hmm, I think we’re going to send intercontinental ballistic missiles to America.  So could they be a threat?  Yes.  But what I would say is…

CROWLEY:  Shouldn’t we stop them now?

PAUL:  Well, we should have not armed them.  If we wouldn’t have armed them in Syria, maybe they wouldn’t…

CROWLEY:  That’s the past, right, but now?

PAUL:  The past — the past is still the current as well.  It is the present.

We are still arming the radical Islamic rebels in Syria.  So, the homeland — they are going back and forth across the border.  They go back into Syria, and that is a homeland that we are helping to defend for them.

CROWLEY:  But what would you do?  How do you stop that?

CROWLEY:  So, out altogether?

PAUL:  No, what I would say is that Maliki is an ally, although here’s the thing, is, they think they are going to create stability by pushing Maliki out in the middle of a war.

So, we push him out and then we have another power vacuum and nobody leading the country at all.  What I would say is, and my prediction is that Maliki will stand up and the Shiites will stand up, that ISIS will not be able to take Baghdad, and there will be a civil war over there.

CROWLEY:  Let me move you to a different subject.

And that is, you are working with Senator Cory Booker, a Democrat from New Jersey, on reestablishing federal voting rights to nonviolent felons who have served parole and et cetera.  What — what — of all the issues facing Congress at this point, what draws you to that?  Is this about Republican inroads into minority communities?

PAUL:  As I have traveled about the country and within my state talking to people, I found a number of people — in fact, as I have explored the issue, there’s nearly a million people in our country who have lost their voting rights.

In Kentucky, you lose your voting rights forever.  I have a friend whose brother grew marijuana plants 30 years ago in college, has a felony conviction, and still cannot vote 30 years ago.  I think that’s wrong and unfair.

Republicans, I think, have been unfairly tarred as, oh, trying to suppress vote.  Here’s a Republican who wants to enhance the vote.  This is a much bigger problem than anything else limiting voting right now.  Nearly a million people can’t vote.  And I want to help people get their right to vote back.

CROWLEY:  And, as we know, African-Americans, percentage-wise, certainly make up a larger percentage of folks being incarcerated.  I think the NAACP has estimated about a third of young black males are in jail.

Is this a way for the Republican Party to begin outreach, which they have said for decades they needed to do, into minority communities?

I believe in the issue, but you are right.  It is opening the door for me to talk to communities.  Three out of four people in prison are black or brown for nonviolent drug use.  However, when you do surveys, white kids are doing drugs at an equal rate, and they are a much bigger part of the population.

So, why are the prisons full of black and brown kids?  It is easier to arrest them.  It is easier to convict them.  They don’t get as good of attorneys.  And, frankly, they live in the city in a much more collected fashion than in the suburbs, and so the police are patrolling the city more.

CROWLEY:  And we should say, your bill in fact does change some drug laws in order to try to even out the punishment for similar drugs.

CROWLEY:  Last question, quickly, just because this brings up the whole idea of voter registration and getting people out to vote.

Hillary Clinton recently proposed that there should be an automatic registering of voters once they turn 18.  What do you think?

PAUL:  I think voting should require a little bit of effort, but I am for people voting.

Registration is not as big a deal for me, how we do it.  In fact, I have talked with other senators about maybe online registration to make it easier.  But voting needs to be in person.

I don’t like the concept of, you don’t even have to get off your couch to vote.  So, I am for going to the polls.  But I’m also giving their voting rights back.  And I’m for everyone voting, no matter who you are, whether you’re Democrat, Republican, independent.  I think more, the better.

CROWLEY:  Senator Rand Paul, some of your proposals coming up in the Senate this week, I understand.

CROWLEY:  So, we will be watching that closely.

CROWLEY:  Thank you so much for being here.

### END ###
Tags
State of the Union with Candy Crowley