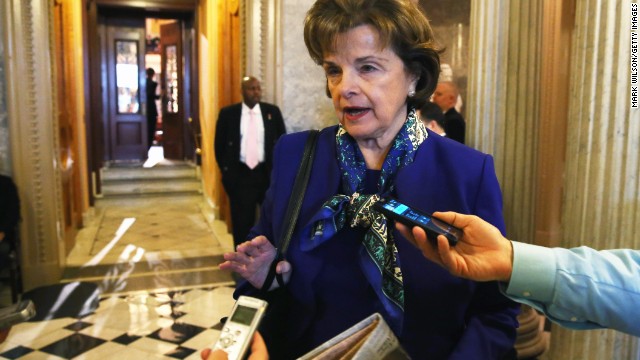 Today on CNN’s State of the Union with Candy Crowley, Sen. Dianne Feinstein (D-CA), chairwoman of the Select Intelligence Committee, spoke to Crowley about the crisis in Iraq and Governor of Montana Brian Schweitzer’s comments.

THIS IS A RUSH FDCH TRANSCRIPT. THIS COPY MAY NOT BE IN ITS FINAL FORM AND MAY BE UPDATED.
CROWLEY: Joining me now, Senator Dianne Feinstein. She is chairwoman of the Senate Intelligence Committee.

Thank you for being here.

CROWLEY: And that’s where I want to begin, because I — I didn’t take a poll or anything, but I imagine that most Americans were surprised to learn 10 days ago or a week ago that something called the ISIS had taken over a third of Iraq.

Did U.S. intelligence spot this problem? Did you know of it ahead of time? And was the severity of it obvious through the intelligence?

FEINSTEIN: Well, obviously, we know about ISIS. We have seen its developments in Syria.

We’re aware of the fact that they are recruiting fighters in Europe. There have been arrests in Spain, France and Germany. They have tried to assassinate the head of security in Beirut. And they were responsible for the killing of three or four people at a Brussels synagogue. They are vicious. They have killed thousands of people. They have cut off heads. They are a major threat.

CROWLEY: So, we knew they were a brutal bunch and a major threat.

FEINSTEIN: We knew they were a brutal bunch.

CROWLEY: Did we know that a third of Iraq could be taken over so quickly? Did we see that coming?

FEINSTEIN: I would have to say no.

But I think it is a real wakeup call for the United States, because they do want to develop the caliphate. They do want to — and they now have just about destroyed the border with Syria. I think the president is doing the right thing.

He’s being a bit circumspect. He’s being thoughtful. I think we’re building our so-called ISR assets…

FEINSTEIN: … so that some pinpointed action can be taken.

But I think the most important thing that I can say today is that the Iraqi state, as a state, is in danger, that there is a limited period of time, that Ayatollah Ali Sistani and his message that we cannot repeat the mistakes of the past, that this Iraqi government, newly reorganizing, has to move and develop a coterie of leaders that can quickly reach out and reconcile, or else we are in the middle of a major Sunni-Shia war. That’s my hope.

CROWLEY: Right. Now, let me — let me just go back to the first point. It is a little startling to me that, after some intelligence failures in the past, that the chairman of the Senate Intelligence Committee says, yes, it was a surprise to find out that it could move that quickly and kind of buzz their way through Sunni territories quick, but, nonetheless, so quickly and get so close to Baghdad.

What happened here? Isn’t here — does that upset you? Is that a failure?

So I think there is a view that, well, we’re always going to criticize. And we just can’t do this. We have to build up the diversity of our intelligence assets and see that they’re adequate.

FEINSTEIN: Yes, we have lackings in North — North Africa, in Yemen. The world is a big place, Candy. And this is extraordinarily difficult to do.

CROWLEY: Is the ISIS an immediate threat to U.S. homeland security?

FEINSTEIN: Well, I believe it can be.

I believe that they’re recruiting in Europe, there’s no question, in these three places, Spain, Germany, the number of passport fighters. We know there are at least 100 Americans that have gone to the arena to fight who have an American passport, who are going to try to get back.

We know that they can go back to the European country, and, if it is a visa waiver country, come right in to the United States. So this is where I think we need to build our intelligence to see that we can disrupt the plot in this country before it happens, because there will be plots to kill Americans.

CROWLEY: And, worst-case scenario, ISIS runs through Baghdad, you get the sectarian war that you are talking about, Iraq becomes a terrorist haven. What’s the U.S. contingency plan here for a group that you say threatens U.S. shores?

FEINSTEIN: Well, what is the U.S. contingency plan for this?

Candidly, I don’t know what the U.S. contingency plan is for a complete takeover of Syria and Iraq.

I do know that what we’re on the foot of is a major Sunni-Shia war. So, the question comes — what John Kerry is doing is important. He’s in Cairo. Hopefully, he’s going to meet with the — with Qatar, with Saudi Arabia, with other Sunni nations and say, look, we need your help.

At the same time, I think — and this is my view — that we should be talking with Iran. You have to realize, Sunnis are in the majority in the world, and the Shia now, with the mobilization of Muqtada Sadr’s Mahdi army, that will be tens of thousands of Shiite fighters.

And we are on the verge of something very serious. And I think we have to meet it. I think our allies have to help us. And I think Iran can play a major role in moving out Maliki and developing a reconciliation government. That is if there is the desire to maintain Iraq as a state.

How much credence should we give that?

FEINSTEIN: Well, I think we should stay out of it right now.

I think the reconciliation has to be done through a new government in Iraq. And it has to be effective. We have got to keep the Kurds. We have got to enable them to have some share of oil, get outstanding tax receipts. Do those kinds of things. And I think there has to be Sunni participation in the government. Otherwise, it is a real problem.

CROWLEY: And, finally, I have to ask you.

The former Governor of Montana Brian Schweitzer, a fellow Democrat, was discussing your role in the NSA and surveillance, et cetera, et cetera, and what you knew and didn’t know, but used really unflattering terms, likening you to something which I’m not going to repeat, because everybody can look it up on Google.

I know that you said he better not come in a room with my husband. Brian Schweitzer has apologized.

But I want to know just flat-out, what was your first reaction when they told you what he said?

FEINSTEIN: Well, my first action — reaction was that I laughed, to tell you the truth.

And he’s got a — clearly, a rather large mouth, and all sorts of things come out. I think that’s really too bad, but it is the way it is.

CROWLEY: It is the way it is, and women kind of — that have been in power for a long time understand, sometimes, these sorts of things happen.

CROWLEY: Let me just ask you quickly, has he called you to apologize?

CROWLEY: Would that help?

FEINSTEIN: No. It — but it says something, doesn’t it?

Senator Dianne Feinstein, thank you so much.

Happy birthday to you on this day.

FEINSTEIN: Well, thank you very much.

CROWLEY: And we appreciate your coming…

CROWLEY: … and sharing a part of your birthday with us.

FEINSTEIN: Thank you. I appreciate that, Candy.

### END ###
Tags
State of the Union with Candy Crowley