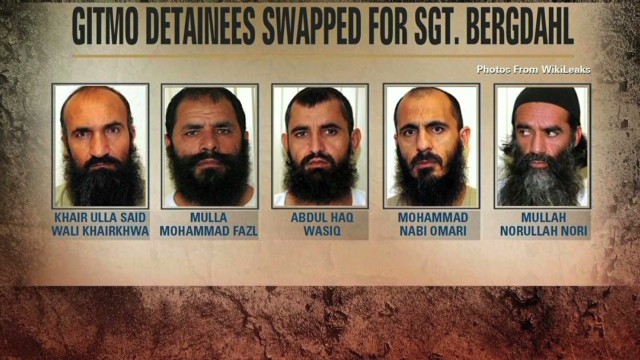 Sen. John McCain: Taliban will “re-enter the fight” in an EXCLUSIVE on CNN’s State of the Union

Today on CNN’s State of the Union with Candy Crowley, Sen. John McCain (R-AZ), member of the Foreign Relations Committee, also spoke to Crowley in a CNN EXCLUSIVE about his take on the deal that brought Sgt. Bergdahl home and his concerns about U.S. national security.

CROWLEY: Joining me now from Sofia, Bulgaria, is Republican Senator John McCain. Senator, I want to get your response to the secretary of state. But in light of the conversation this week, I wanted to start off with this. First of all, I think all of our audience and most of America understands the courage and the valor and the honor that you served for America in Vietnam, as a prisoner of war in part, for more than five years.

So, in the spirit of that, I want to ask you this question. Let’s assume that everything that’s been put out there about Bowe Bergdahl this week is true — and we can’t assume that, because we don’t know — that he went AWOL, that he may have wanted to defect, that perhaps he wanted — I’m sorry — he may have wanted to desert, that perhaps he converted to Islam while in captivity.

If you look at those things and say maybe they’re true, does that make this young man less worthy of rescuing from his circumstances than the young John McCain as a POW?

MCCAIN: No, it does not, Candy. We have the obligation to do whatever we can to bring any of our captured service men and women back.

But the question is at what cost, whether it would put the lives of other American men and women who are serving in danger. And, in my view, clearly, this would. And, by the way, the president and John Kerry are confident that if these guys reenter the fight — one of them has already announced that he will reenter the fight — 30 percent of those who have been released from Guantanamo have reentered the fight.

And we certainly haven’t been able to kill all of them. So what we’re doing here is reconstitution — reconstituting the Taliban government, the same guys that are mass murderers. One killed thousands of Shiite Muslims. These are the people that used to take women into the soccer stadium in Kabul and hang them from the goalposts.

CROWLEY: But the question here is, are you — are you looking at it, saying that the restrictions that John Kerry is talking about are not enough? Because they talk about additional restrictions. You are privy to this sort of information.

The secretary said, look, the Qataris are not the only ones that are watching this man, and we will get them if they choose to return to battlefield.

At some level, you can’t guarantee they will never do that. Why is that not enough of a guarantee?

MCCAIN: Well, first of all, Qatar is not renowned for its ability to keep things in security.

We know that 30 percent of those who were released from Guantanamo before have reentered the fight. These people are in the leadership. They are the ones who are dedicated, the hardest of hard- core. And, by the way, they became a lot harder after their years in Guantanamo.

You have to weigh the risk to the lives of the fellow — of our fellow service men and women who are serving. That’s why Leon Panetta. That’s why so many other members of Congress opposed this deal because…

MCCAIN: Well, first of all, I wouldn’t release these men.

MCCAIN: Second of all, I would — I would release people who — not these men.

They were judged time after time. During their confinement in Guantanamo, they were evaluated and judged as too great a risk to release. That’s — that was the judgment made about them, not by me, but by the people who are — evaluate these people.

So, they were judged too great a risk. They’re committed to returning to the fight. They’re in Qatar for only one year. Then the leadership — Mullah Omar just got his cabinet back. So, I’m saying again I think we should do everything we can in our power to release — get — win the release of any American being held, but not at the expense of the lives and well-being of their fellow service men and women.

CROWLEY: Senator, there have been several rounds this week between a statement you made four months ago and what you’re saying now. I just want to remind quickly our viewers of something that you told our Anderson Cooper in February and then ask you something.

MCCAIN: Now this idea is for an exchange of prisoners for our American fighting man. I would be inclined to support such a thing, depending on a lot on of the details.

CROWLEY: So, Senator, at the time that you made that statement, you talk about — you say depending on the details. And we know that you don’t like the details of this.

The names of these particular prisoners were already out there, had been out there in print, apparently had been talked about. In relationship to the exchange, not just this confidence-building, but in relationship to this exchange, are you saying now that there are others at Guantanamo that you would have released instead? And what happens if no one but these five are acceptable to the folks holding Sergeant — that were holding Sergeant Bergdahl?

MCCAIN: Well, first of all, as to who the individuals were, I never signed off on those individuals.

But — and that’s why I said the details. The details, of course, that they’re able to reenter the fight, the details as to who they are and what they have done, the details of there were — I believe that there are other prisoners, some of whom we have already released, that we could have released that — in exchange. These five are the top five picked by the Taliban, not by us, but by the Taliban.

So all I can say is, you can have a certain price, but it’s exacerbated by the president’s decision to take everybody out of Afghanistan, and these people will be going back as the Taliban leadership, and that will, of course, in my view, cause another replay of Iraq, which I thought he should have paid attention to.

CROWLEY: Well, precisely, Senator. And that’s my next question.

So, if you let them loose now and say, we’re going to supervise them for a year, isn’t that a better deal than just saying, OK, the war is over and we have got to send everybody home?

If you think that we were going to just release everybody, like Khalid Sheikh Mohammed and others, I’m afraid that you have been misinformed. So, we were not going to release everybody. Second of all, I believe that we should keep these people, because they’re hard- core jihadists who were responsible for 9/11. Of course, nobody wants to release people who were responsible for 9/11.

And these people that are released that were Taliban governing worked hand in glove with al Qaeda.

CROWLEY: Sure, but, without trial, you would keep them forever, correct?

CROWLEY: Senator John McCain, thank you so much for joining us this morning.