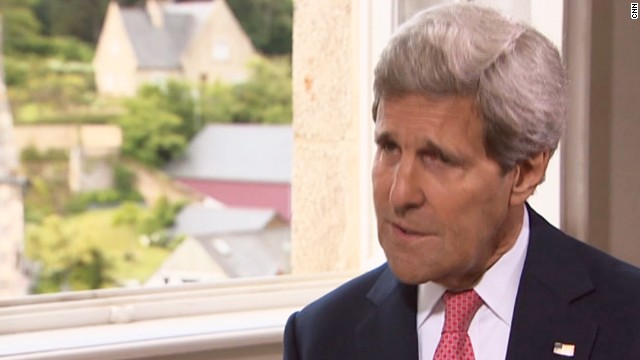 Sec. John Kerry: “I don’t think anybody should doubt the capacity of the United States of America to protect Americans” on CNN’s State of the Union

Today on CNN’s State of the Union with Candy Crowley, U.S. Secretary of State John Kerry spoke to Elise Labott, CNN foreign affairs correspondent in a CNN EXCLUSIVE about the release of the Guantanamo Bay detainees and the safety of the American people.

On the Obama administration’s commitment to monitoring the five Taliban figures exchanged for Sgt. Bergdahl, Kerry said, “I’m not telling you that they don’t have some ability at some point to go back and get involved. But they also have an ability to get killed doing that. And I don’t think anybody should doubt the capacity of the United States of America to protect Americans, nobody.”

For more information, check out the following blog post:

ELISE LABOTT, CNN FOREIGN AFFAIRS CORRESPONDENT: We’re told that these five can roam around the country. Pretty vague on what those restrictions and monitoring are.

I mean, tell me about that. And on a scale of one to 10, 10 being the most confident, how confident are you that the Qataris are going to be able to keep a close eye on these guys?

KERRY: Well, they’re not the only ones keeping an eye on them.

LABOTT: The U.S. is going to be monitoring them?

KERRY: I’m just telling you they aren’t the only ones keeping an eye on them. And we have confidence in those requirements. And if they’re violated, then we have ability to be able to do things. I’m not…

LABOTT: What kind of things?

KERRY: I’m not — Elise, I’m not telling you that they don’t have some ability at some point to go back and get involved. But they also have an ability to get killed doing that.

And I don’t think anybody should doubt the capacity of the United States of America to protect Americans, nobody.

LABOTT: Meaning you would kill them?

KERRY: No one should doubt the capacity of America to protect Americans.

And the president has always said he will do whatever is necessary in order to protect the United States of America. So, these guys pick a fight with us in the future or now or at any time at enormous risk. And we have proven what we’re capable of doing with al Qaeda — let me just finish — with al Qaeda, the core al Qaeda in West Pakistan, Afghanistan.

LABOTT: Some people say Bowe Bergdahl is being swift-boated. Do you agree with that? Did he serve with honor and distinction, as Secretary — as National Security Adviser Rice said?

LABOTT: It sounds like you’re not sure he served with honor and distinction.

What I’m saying is, there’s plenty of time for people to sort through that. What I know today is what the president of the United States knows, that it would have been offensive and incomprehensible to consciously leave an American behind, no matter what, to leave an American behind in the hands of people who would torture him, cut off his head, do any number of things. And we would consciously choose to do that?

That’s the other side of this equation. I don’t think anybody would think that is the appropriate thing to do. And it seems to me we have an ability, we know we have the ability to be able to deal with people who want to threaten Americans or threaten the United States. And if that’s what they go back on their word to do or if the Qataris don’t enforce what they have done, we have any number of avenues available to us to be able to deal with that.

LABOTT: Now, one of the members of the Taliban, these detainees from Guantanamo, has already vowed to return to Afghanistan, return to the fight and kill Americans.

And the head of the Haqqani Network who was holding him said, look, we have a pretty good idea here now, let’s kidnap more Americans.

What do you say to the families of American soldiers that perhaps these guys could go back and kill Americans again?

KERRY: Well, first of all, propaganda is propaganda. And they will say whatever they want to stir the waters. So people should not be lured in by their propaganda, number one.

Number two, we are ending our combat role. Our combat role in Afghanistan is over. We’re going to have very few people in that kind of position on occasion where — but I honestly — I just think that’s a lot of baloney, because — and whatever degree it may be true, they will wind up putting themselves at the mercy of those people who are very effective, who are there, who will deal with those matters.