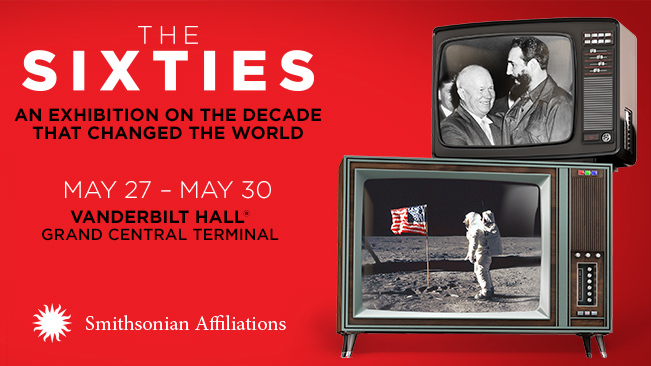 In cooperation with eleven Smithsonian Affiliate museums from around the country, CNN installed a museum-style exhibit in Vanderbilt Hall in Grand Central Terminal in New York City celebrating the spirit of the 1960s. Playing homage to the decade’s iconic imagery, larger-than-life protagonists, and monumental social, political and cultural changes, “A Look into The Sixties: An Exhibition on the Decade That Changed the World” touched upon all ten of the major themes explored in the documentary series, CNN’s THE SIXTIES, executive produced by Tom Hanks and Gary Goetzman.

The items that were on display included the original bench and key from the jail cell in which Dr. Martin Luther King, Jr. penned his famous Letter from a Birmingham Jail, a full flight suit and protective gear recovered from a US pilot whose plane was shot down in Vietnam, rare Beatles memorabilia, original posters and artwork from Woodstock, and a number of other cultural and political artifacts.

Just the Two of Us: Recalling Gemini

Brothers and Sisters in Arms: The Intersection of the Labor & Civil Rights Movements in the 1960s

The Whole World Watches: Media & Political Conventions in the 1960s

Television in the 1960s: A Medium at War with Itself

From MLK to Jay Z- Black History is American History

Christopher Moore, Senior Researcher at the Schomburg Center for Research in Black Culture

The Impact of Birth Control: Sex & Family in the 1960s