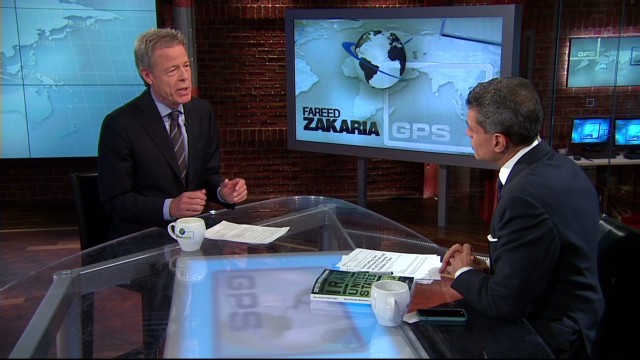 CNN’s FAREED ZAKARIA GPS features an interview with Jeff Bewkes, chairman and CEO of Time Warner. Bewkes spoke with Fareed about the differences between television in the 1960’s and television today, why TV is in its second golden age, and the future of the industry.

FAREED ZAKARIA, HOST:  In 1950, there was only one way to watch TV — on an actual TV.  And only 9 percent of American households had them.

Today, around 95 percent of homes have televisions.  But they can also watch shows like GPS on cell phones, on tablets and on their desktops, among other places.

You can get me on iTunes and Amazon. Other shows are available on Web sites like Hulu and streaming devices like Roku, to name just a few of the options without paying cable or satellite fees.

The broadband and mobile revolutions have brought us to an inflection point in the television business of the kind we haven’t seen for 40 years since cable first took off.  It’s all about viewing shows when it’s convenient, not when they are scheduled, and viewing them on any device, not just that TV in your living room.

Jeff Bewkes is the chairman and CEO of Time Warner, which is CNN’s parent company.

Under Bewkes’ purview, are not only channels like CNN and HBO, but also TBS and TNT, two of the five top rated U.S. cable channels, as well as the world’s highest grossing movie studio, Warner Brothers.

ZAKARIA: Jeff, when you look at it, what is the big difference between television in the 1960s and television today?

JEFF BEWKES, CEO, TIME WARNER:  Back in the ’60s, TV was new.  And it was exciting because it was new.  But if we all remember this, there were three channels, mostly in black and white.  We forget, TV was interactive back then.  You had to get up and wiggle the antenna to see if you could get a picture.

But what the world of TV has become today, in the United States, more than any other country, is hundreds of channels with your show of whatever interest, a lot more quality in the television.

And the reason that this has happened is basically that television is a thriving business, not just in America, but all over the world.  Advertising revenue, subscription revenue has all come in to create much bigger TV budgets, much more participation of movie actors in TV.

And just to think of one show which is dear to my heart, “Game of Thrones,” for example, I think it has the biggest cast of any show that’s on TV today.

And this is all about the kind of budgets that television can support.

So TV is now in a second golden age.  And a…

ZAKARIA:  And — and you think that golden age, uh, is — is mainly because of what forces?

BEWKES:  Well, really, one of the secrets about television today is there’s all these channels.

And everybody loves their favorite show, but as I think most people know, your favorite channel now may be different than your brother’s or your father’s. So in the old days, everyone was sitting around.  Every TV had — every house had one television.  And today, there’s a screen for everybody.  There’s not only TVs across every room, but now — this is probably the untold story — television is taking over the Internet.

And what the Internet does, is it…

BEWKES:  Television is taking over the Internet.

You know, what does that mean?

Well, that means every one of the people watching this show can not only watch it on their television screen, they can watch it on any electronic screen they have.  And it means that all of television, all your favorite shows, are now on-demand.  You can not only watch what you want when you want, but you can take it with you.  You can be watching GPS on a subway or in a car driving down the highway.

ZAKARIA:  So a lot of people look at that and say so what is now going to happen is the great unbundling of television, that what you — you make a lot of money because the cable channels provide a bundled product, 189 channels or whatever it is. But there is this — a study I saw which said Nielsen says most Americans watch just 9 percent of the TV channels available to them.  That’s 17 channels out of 189.

ZAKARIA:  Doesn’t that mean that what’s going to happen is there’s going to be an unbundling and those who don’t want to watch sports who don’t have to pay this big, fat cable fee that encompasses everything.

BEWKES:  Yes, here’s the, uh, here’s the fact about it.  The package of all these channels, where everyone watches a different set of their favorite channels is what allows the whole package to be cheap.  So what gets lost in the debate is that the amount of time people are spending watching television as it gets better and it’s on-demand, it’s about six hours a day.  And they’re spending to do that the best channels in hi-def, on-demand.  They’re spending less than half the cost of one Starbucks latte.

So the actual price per viewing hour per channel that you’re watching is actually a very good bargain.  And the proof of it is that 85 percent of the homes in the United States are subscribing to some package of television.  And it’s getting more effective.

ZAKARIA:  What do you say to those who say you’re watching people cut the cable cord as they are able to find ways to watch on streaming and things like that.

BEWKES:  Yes.  Yes.  Well, they — if you do that, cut the cord, you have less choice of what you can get.  There’s some of it happening, mostly among younger people.  We think the reason is that we haven’t really made all the channels, the hundreds of channels on your television dial, they’re not that easy to access yet on an on-demand basis.

And we believe as the industry — think of HBO Go as a good example.  If you’re an HBO subscriber and you are used to going to the broadband and watching HBO Go, that is the future of TV.  Every channel on television, the whole TV dial, is going to work the same way that YouTube works or that Netflix works.

Do you feel like maybe it needs an upgrade, maybe the Italian Army?

BEWKES:  You know, that would be fair.  I think they’ve done a great job.  It’s a great product.  What Netflix has accomplished — and we think it’s great and they’ve become a good business partner of ours — is that they’re a subscription video-on-demand service and they’ve joined the ranks of HBO, Showtime as a good subscription offer.  Back in the time — you know, what people want is they want more choice of what they can get.  Uh, Netflix does a good job of making a strong library service of a lot of classic and older shows and movies available and a very, very effective way to find them.

ZAKARIA:  Well, on that happy note for GPS, Jeff Bewkes, a pleasure to have you on.

ZAKARIA:  Now, if you enjoy thinking about the future of TV, you will surely want to watch the premier of CNN’s terrific new series, “The Sixties,” executive produced by Tom Hanks.  The episode on “TV of the Sixties” will air this coming Thursday at 9:00 p.m. for viewers in the United States.