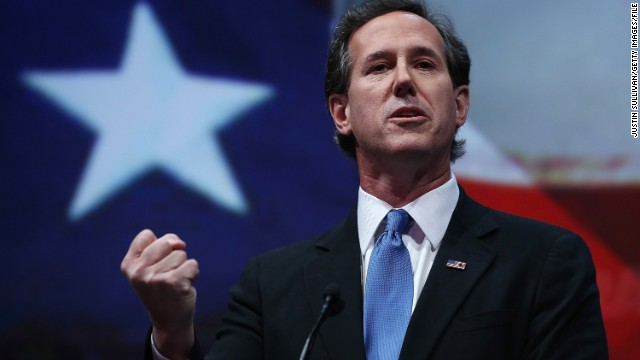 CROWLEY: I’m joined now by former U.S. Senator Rick Santorum. He’s out now with a book called “Blue Collar Conservatives: Recommitting to an America That Works.” Thanks for being here this morning.

CROWLEY: Appreciate it. And Happy Mother’s Day to those in your life.

SANTORUM: Oh, thank you. I have a wife and a mom, and that’s terrific. Thank you.

CROWLEY: I wanted to just revisit for a minute the new CNN/ORC poll on the question of what should Congress do with Obamacare, with the health care law.

Sixty-one percent said, keep it or some make changes, 38 percent, repeal it. My question to you — and, by the way, the majority…

CROWLEY: Most people still felt like it’s too early to tell whether it’s a success or a failure; 38 percent said, I think it’s a failure.

But, nonetheless, it’s about repealing it or keeping it. The vast majority said change it. Is it time to drop repeal Obamacare and work with what’s there?

This one isn’t working. You can say, well, we need to change it. You can say we — I think you probably have a lot of partisans who are probably saying fix it because they don’t want to say repeal it because that goes into the Republican message.

CROWLEY: But you can see why Democrats would say that.

SANTORUM: Well, I think — my guess is that 38 percent, almost all of them are Republicans. So, that’s probably a very popular thing still among Republicans.

And among Democrats, I think they — they probably are feeling a little bit of affinity toward their party as elections approach and saying, well, let’s just change it. It’s not working well. I don’t anybody — we have got four exchanges, half-a-billion dollars wasted by the federal government on setting up four exchanges that have failed on the — on the state level, more that are going to fail. I mean, this still is a big problem for our country and for working men and women.

CROWLEY: Well, from a purely political point of view, I understand that going out and courting conservatives, trying to get them out to vote, probably means you stick with repeal it.

But when less than when — when 38 percent, only 38 percent say repeal it, isn’t it time for Republicans to say, look, here is what we should keep, and let’s change the rest of it?

SANTORUM: No, I don’t think you react too quickly to any poll.

I think you have seen a lot of polls much higher than that. I think it goes up and down. I think the president has had a couple good weeks on the eight million people that have signed up. I think he’s going to have a couple of bad weeks when we figure out that a lot of those people actually don’t have coverage and the ones that do aren’t happy with it.

So, I think this is going to ebb and flow as information comes in. I think the emphasis has to be we need a different health care system than what President Obama has set up, and here’s where — here’s our vision for the future.

CROWLEY: Let me move you to something else.

Mitt Romney this week joined you in saying, look, I think we should raise the minimum wage. It’s something that you have long — a position you have long held when you were in the Senate…

CROWLEY: … when you were in the House.

As I was going home on Friday, I was listening to talk show host Mark Levin.

CROWLEY: And here’s — here is what he had to say about Romney.

CROWLEY: Now, Mark Levin is a pretty influential guy. I mean, he endorses candidates. It means something.

SANTORUM: And he’s a good guy. He’s a great guy.

CROWLEY: He’s got a big — and — but he says, look, this is destroying the Republican Party.

SANTORUM: Yes, I — I think Governor Romney came out in favor of President Obama’s increase.

I’m not in favor of President Obama’s increase. When I was in the Senate and when I was in the House, I did vote for minimum wage increases that were incremental, that were not inflationary, that did not cost jobs

If you look at the CBO report, half-a-million people would lose their job as a result of the Obama minimum wage increase. I’m talking more in the age of — more in the range of a dollar, phasing that in. I think that will create a minimum wage. Only about 2 percent of workers are covered by the minimum wage. Historically, it’s between 5 percent and 7 percent. And so I think we need to…

CROWLEY: But, from a political point of view, there is this sort of intraparty push and pull. Some people think there shouldn’t be a minimum wage at all. Let the marketplace, lah, lah, lah.

CROWLEY: But there’s also then that kind of overall look saying, does this add to Republicans’ problems with working people?

SANTORUM: I think it does.

I think if you — you don’t see too many Republicans arguing against a minimum wage. I know a few have. But I don’t think too many do. And so, if you’re going to have a minimum wage, I think we just need to be reasonable about it and offer an alternative.

In the past, Republicans have offered alternatives to minimum wage increases. And most of them are the ones that have been successful.

CROWLEY: I want to ask you about the VA, because one of the things I didn’t know about you was that you grew… SANTORUM: Yes, I’m a VA…

CROWLEY: Yes, you grew up on a VA post.

CROWLEY: Both your parents worked in VA hospitals.

It is — and it’s not — when you look at the VA as a whole, not just the hospitals — and you know we have had this horrendous instances that have come up — and the VA chief, Eric Shinseki, has said, we’re going to investigate these things.

But there’s also been this huge backlog for benefits for veterans, all kinds of benefits. Five years in this job, is it time for Eric Shinseki to find another job?

SANTORUM: Yes, I think, when my parents worked at the VA, we saw — I saw a gradual erosion of care.

If we treat our veterans this way, imagine how we’re going to treat average, ordinary Americans who don’t have the didn’t political pull and the pull at the heartstrings that our veterans do.

This is a — this is a good place to look as we consider Obamacare and consider where they’re heading with Obamacare as to whether we really want this as a government system of medical care.

CROWLEY: But you sort of suggest that this is a structural problem, and not necessarily a leadership problem?

SANTORUM: I think it’s a structural problem and a leadership problem.

CROWLEY: Should he go? Should Shinseki go? SANTORUM: You know, I’m not going to make any comments about appointments. I think he should have to face the music.

And if he’s proven not to have performed admirably, I think the administration should do what’s appropriate.

CROWLEY: Let me move you on to the Benghazi hearings.

Where does Benghazi fit into that?

SANTORUM: I think it’s important for Benghazi — the Benghazi committee to look at the information, try to do so as nonpartisan as possible. I know that — that sounds — well, this is a whole partisan exercise.

It doesn’t have to be.

CROWLEY: And it’s an election year.

SANTORUM: Yes. It doesn’t have to be. I have a lot of faith in Trey Gowdy. I think he’s a really solid guy and I think he’s a serious prosecutor. If he does his job, does it in a professional way. He tries to tone down rhetoric and just get to the facts and if new facts are produced I think this — no matter whether the Democrats are involved or not, if there’s more credible evidence that comes out as a result of this, I think it will be a successful event for them.

CROWLEY: I’m smart enough to know that you’re not going to announce whether you’ll run or not run for the 2016 presidential election quite yet. So I want to set aside your deliberations and ask you when you look out there at those who are making noises about this with Rand Paul, Ted Cruz, Marco Rubio, Walker and Jeb Bush.

SANTORUM: You can spend the rest of the show —

CROWLEY: Chris Christie. We can go to through that whole thing.

Who do you like? When you look and say, if I don’t get in I like this guy.

SANTORUM: Well, I wrote this book “Blue Collar Conservatives” because I think we need to have a little image makeover, an opportunity to rebrand ourselves in this election and going forward. And so I’m looking for candidates who connect with average voters, someone who has a heart and understanding for the difficult times that those voters are going through. And whether it’s Rick Santorum or someone else, it’s someone who has that appeal and connection.

CROWLEY: Who is that right now?

SANTORUM: Well I mean, you know, I put this book out here because I’m…

CROWLEY: You want to (INAUDIBLE) that guy.

SANTORUM: …looking at it.

SANTORUM: Whether other people join in — I hope they do. I mean I’ve been talking to a lot of candidates across the country saying, you really need to take a look at this book and begin the opportunities that is present right now to create a new image for this party that doesn’t have a very good one right now.

CROWLEY: No — for sure. Again your book “Blue Collar Conservatives,” recommending (ph) to an America that works. Happy Mother’s Day to your wife Karen and to your mother. I think we have a great picture of your family here.

SANTORUM: My two boys at the Citadel. The middle one there, Daniel, his recognition day. So he got recognized as a knob (ph) first year at the Citadel.

SANTORUM: My mom and mother-in-law on the far right.

CROWLEY: Wow. There are a lot of moms there.

CROWLEY: Thank you for joining us on this day.

Up next, Vice President Biden says, the middle class first saw their economic recovery begin to unravel during the Clinton years. What that says about his 2016 ambitions with our political panel after this.