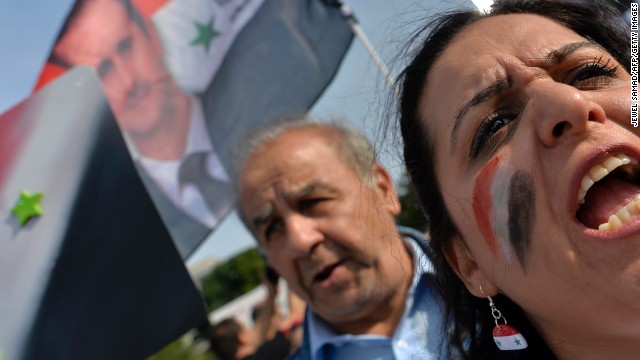 For more information, check out the following blog post:

Russia, Syria, Middle East: Is the U.S. losing its ability to sway allies?

A transcript and video from the interview are available after the jump.

WH: U.S. power has not declined

THIS IS A RUSH FDCH TRANSCRIPT. THIS COPY MAY NOT BE IN ITS FINAL FORM AND MAY BE UPDATED.
CROWLEY: President Obama is in Malaysia, part of his four-nation tour of Asia. He has wanted to increase U.S. focus on that part of the world since taking office. But other hot spots from Ukraine to the Middle East keep getting in his way of his foreign policy agenda.

Thanks for joining us again, Tony.

CROWLEY: Looking at this week, no trade deal with Japan, which the U.S. is pushing very hard for, Israeli-Palestinian negotiations, where the secretary of state has focused intensely for nine months, fall apart, and Mr. Putin still has his troops sitting on Ukraine.

If you look at this week, what you’re hearing from critics is that the U.S. power to sway the events of the world has declined. Regardless of whether you blame President Obama for that or whether you say it’s the nature of the world, it’s how it now works, would you agree with that premise?

And I think this week actually demonstrates it. First, look what’s happened in Asia, with the president leading the effort to rebalance our relationships in Asia, all the different lines of effort that we have been working on over the last five years, strengthening our alliances with our core partners, building the institutions in Asia, developing trade and commerce, so that we open up markets to Americans, resituating our defense posture.

Every single line of effort, we’re stronger now than we were five years ago, as well as working the relationship with China. At the same time, we have global responsibilities. The president was advancing this agenda in Asia at the same time, as you said, we had Ukraine.

Russia a week ago signed onto road map to de-escalate the crisis in Ukraine. Unfortunately, it hasn’t lived up to the commitments it made. So the president in Asia convened by phone all of the senior European leaders and got them to agree to a very strong statement from the G7, and this week additional sanctions to put the pressure on Russia.

CROWLEY: So there will be — and I want to talk about Ukraine in a minute, but I first want to follow up and say, look, if you take the broader view, and you look at Assad in Syria still in power years after the president said, this guy has got to go, if you look at the Egyptians, who staged two coups, over initial U.S. objections, during the Obama administration, the E.U. wasn’t initially on board with some of these sanctions.

Even Britain failed to come with the U.S. in some of its efforts. So, it just looks as though the ability to persuade allies has become less and less. Are those not failures?

I think, today, we saw the president announce a major basing agreement in the Philippines that is…

CROWLEY: But those aren’t the problems of the moment.

I think that’s what I’m trying to say.

CROWLEY: If we had — with Syria, and we wanted to — there was an effort to get Britain to go along with us into Syria, and Britain didn’t want to go. There’s just — that’s our closest ally.
BLINKEN: So…

CROWLEY: It just seems, as we move on to the big problems, I’m not saying no forward movement here. I’m just saying when you look at the big problems that have — we face.

CROWLEY: But he’s still killing people at will. Right?

BLINKEN: The humanitarian situation is bad and the standoff with Assad is bad.

CROWLEY: Is it still U.S. policy that we want Assad out? Is that still…

BLINKEN: Assad has forfeited any right he has to leading his country. And it’s clear that he — that there is no way that Syria can find peace and stability with Assad in power.

CROWLEY: So U.S. policy is we want him gone?

CROWLEY: I want to move you to Ukraine.

All Western allies are on board with new sanctions. Is that correct?

CROWLEY: As a result of those phone calls?

CROWLEY: What is the thing that’s going to hurt President Putin the most?

BLINKEN: Look, step back and look at what’s already happened as a result of the actions Russia has taken and the steps we have taken in response, led by President Obama.

The economic isolation of Russia is growing every single day. Its financial markets are down 22 percent since the beginning of the year.

CROWLEY: But you don’t want to punish the people of Russia. You want Putin to move away from the Ukraine border, and he’s still there.

BLINKEN: He has a very hard choice to make, Candy. He had a compact with his people. And the compact is this: I will deliver economic growth for you if you remain politically compliant.

Right now, he’s not delivering growth. And the pressure that we’re putting on him, in coordination with other countries around the world, is forcing that choice on him.

CROWLEY: It may be, but, as you know, his popularity — at least according to some polls. And let’s face it. We — Gallup has not been in there, so we’re not totally sure.

CROWLEY: But we’re seeing that his popularity goes up because it’s seen as, hey, the West is trying to push us around again.

So, the question remains, it may be hurting Russia, but it doesn’t seem to be moving Putin. So, in the new round of sanctions, what will move Putin?

BLINKEN: As of — starting this week, in coordination with our allies and partners, we will be exerting additional pressure on the people closest to him, the companies that they control, the defense industry. All of this is going to have an impact.

CROWLEY: Put some additional pressure. You going to freeze their accounts?

BLINKEN: Well, stay tuned. We will see in the coming days as we — as we roll out these sanctions.

But the point is this, Candy. Crimea is already becoming a dead weight on Russia. You’re right. In the initial moments, there’s nationalism, and that boosts his popularity. But they are spending billions and billions of dollars to prop up Crimea.

At some point, the people are not going to like that. All of this is creating a dynamic in which what Putin has promised to his people, which is growth and prosperity, cannot be delivered because of…

CROWLEY: How long before you think it’s going to hurt Putin himself? Is there something in these new sanctions that goes directly at him?

CROWLEY: Does he have bank accounts you can freeze?

BLINKEN: There are lots of things that are going on around him, the people who are around him who matter to him who are going to be affected by these sanctions.

But, more than that, it’s the Russian economy. The growth progressions for the Russian economy as a result of these sanctions are heading in to below 1 percent. Again, over time, this has a significant impact because he can’t deliver what he promised to his people.

CROWLEY: And is time of the essence here? Do you need him to do it in a week or two weeks. Are you willing to wait him out and to exert further pressure on the Russian economy?

BLINKEN: We need to be deliberate about this, and we need to do this in coordination with our partners.

What we’re also doing, Candy, that is very important is increasing the support for Ukraine. Over the next week…

CROWLEY: Let me ask you about that, because I want to…

What they would like is lethal aid. They would like weapons, armaments of some sort. Have you ruled out sending any lethal weaponry to the Ukraine government?

First, we’re focusing on where we can be most effective, the economic assistance. Over the next week, the IMF program is going to go forward. And we’re looking at, all told, between the IMF, between us, between the World Bank, other countries, $37 billion over two years. That’s going to have a dramatic impact on strengthening…

CROWLEY: How about the weaponry they want, because I have to — let me just — I want to read you something that the Ukrainian prime minister said, which was that he believes that Russia is trying to start World War III.

You cannot win World War III if the Western allies, including the U.S., have said, hey, we’re not coming in, and you can’t get lethal weapons.

BLINKEN: The vice president was in Ukraine just a week ago. He announced additional nonlethal security assistance to Ukraine.

We have been providing that assistance. We have also worked with Ukraine since before this crisis to help professionalize their military. But here is the bottom line. We could send weapons to Ukraine. It wouldn’t make a difference in terms of their ability to stand up to the Russians. What would make a difference… CROWLEY: Well, they can’t win, but they might be able to do more than they’re able to do now.

We will have a program to do that with the new government when it comes into office after May 25.

Now pro-Russian activists in Eastern Ukraine are holding Western observers from a lot of different countries. Does that change your calculation at all?

BLINKEN: Well, I think it just underscores that what Russia is doing in Ukraine directly or through its proxies is brutal, it’s cynical and it’s dangerous. The very observers…

CROWLEY: But it doesn’t change your — your approach?

BLINKEN: No, it only adds to the fact that we need to take further action. And that’s exactly what the president worked to do with our European partners on Friday.

CROWLEY: And if there is unity between Fatah and Hamas, and they go ahead with this unity government that they’re talking about, will the U.S. halt aid to the Palestinians?

BLINKEN: You know, what President Abbas announced the other day was an intent to work over time to get some kind of unity government. We have heard that before.

Let’s see what happens. Let’s see if they actually deliver on it. They haven’t in the past. But our bottom line is very clear. There are clear principles that any Palestinian government has to adhere to: recognize Israel, renounce terrorism, respect past agreements. Any government has to do that.

CROWLEY: You would consider cutting off aid?

BLINKEN: If the government didn’t do that? Yes.

CROWLEY: Tony Blinken, thank you for joining us this morning. We always appreciate your time.

BLINKEN: Thanks very much, Candy.