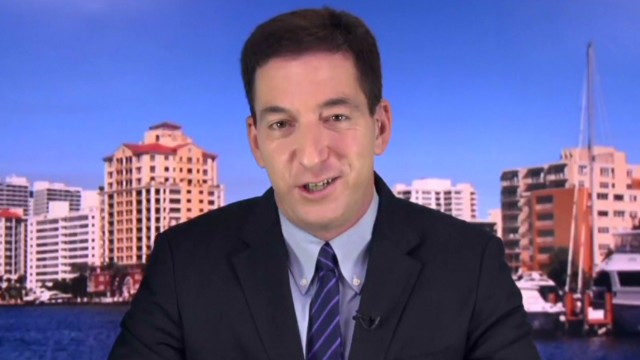 Greenwald: “I look at Peter King’s condemnation as an enormous badge of honor”

Today on CNN’s Reliable Sources hosted by Brian Stelter, Glenn Greenwald, founding editor of ‘The Intercept’, spoke exclusively to CNN about winning the Pulitzer, receiving harsh criticism from lawmakers, and coming back to the United States.

STELTER: Glenn thank you so much for joining me.

GREENWALD: Great to be with you.

STELTER: Where were you at 3pm on Monday when the awards were announced and what was your initial reaction?

GREENWALD: I was actually having lunch, I didn’t want to pay too much attention to it or try and follow it to closely. Um, but I had my phone on the table and I knew that the hour was upon us and you know, as I said, I think there was an expectation that the committee had to recognize the reporting in one way or another and the question was going to be how and so to learn that It was the public service award and that it was given to the Guardian and the Washington Post for the work that we had done was really gratifying because I think that is what the ideal was that we always tried to fulfill was doing the reporting in the public service.

STELTER: We saw Congressman Peter King, one of your sharpest critics, write on twitter on Monday right afterwards, he said “Awarding the Pulitzer to Snowden enablers is a disgrace.”  Anything you’d like to say back to him about that?

GREENWALD: You know I look at Peter King’s condemnation as an enormous badge of honor. You know if you look at what people were saying about Danielle Ellsberg of the New York Times in 1971, which is now widely recognized as extraordinarily heroic and noble and important reporting, the Peter Kings of that era were saying the same thing, they were actually threatening the New York Times with prosecution and they empanelled a grand jury to consider prosecuting them. Senior Obama administration officials were suggesting what we’re doing is criminal as well. An that’s just part of what I think journalism is, if you want to be adversarial to those who wield power, you have to expect that those who wield power aren’t’ going to like what you’re doing very much, and not only doesn’t that bother me, I see that as a vindication that what I’m doing is the right thing.

STELTER: Let me play that now infamous clip of David Gregory talking to you on Meet the Press.

GREENWALD: I think it made a statement, whether that was their intent or not I don’t know. I assume it was. The people on the committee are long-time journalists and presumably interested in defending basic press freedoms. And to me this is one of the most important things I think has happened in this story is it wasn’t just David Gregory, it was this series and it escalated recently of not just Peter King, but people like Mike Rogers and James Clapper and Keith Alexander, allied governments in Canada explicitly calling me personally and my colleagues criminals for reporting on this story and they wanted to create this climate where there was this serious possibility that those of us who were doing the reporting could be criminally prosecuted.

And I think one of the reasons why I was willing to come back to the United States when I did is because I knew that the Polk Awards as well as the Pulitzers were this week and it would make it very difficult to follow through on those threats, but that climate of fear was deliberately cultivated at the highest levels of the US government and I think the Pulitzer board did answer that rather soundly.

STELTER: Let me ask you about coming back to the US. When we spoke on this program before, you’ve come to us from Brazil, where you spend most of your time. You hadn’t come to the United States since the Snowden stories began to be published. Tell me about that decision-making process. It sounds like the awards were part of it, but did you also seek out any assurances from the US government that you would be able to enter the country freely?

GREENWALD: We did. I mean, I had lawyers working for several months, including many who have connections at the highest levels of the Justice Department, trying to get some indication about what the government’s intentions were if I want to try to return. And they were given no information, they were completely stonewalled. The government wouldn’t say if there was a grand jury empaneled, if there was an indictment under seal, if they intended to arrest us. They wanted to keep us in this state of uncertainty. When you combine that with all the threats I just referenced, there clearly was some risk of coming back. But at the same time, we just felt on principle that I was no longer willing to be kept in a single country and kept out of my own country based on these sort of implicit threats and bullying techniques and if they really wanted to do something, I’d force the issue and make them do it.

STELTER:  Your critics might say you’ve trumped up this possible threat. Did you really feel you were concerned about coming back, that they could for example, stop you at customs and interrogate you or even arrest you?

GREENWALD: The senior national security figure in the Obama administration is James Clapper, who repeatedly called us accomplices, which is taken from the criminal law. The chairman of the Houser Intelligence Committee Mike Rogers explicitly called me a criminal and a thief and tried to convince FBI Director James Comey to arrest me. The UK government detained my partner for nine hours under a terrorisms law. Of course it was a threat and they wanted us to think it was a threat. We didn’t concoct those statements or those actions- they did that themselves on purpose to try to create this menacing climate.

STELTER: And I believe you have a book coming out very soon…coming out in May right?

GREENWALD: I do so that’s one of the reasons I intend to come back to the US a lot.  I think the material in the book which includes a lot of new stories from the Snowden archive has a lot of impact for the United States and I want to come back and talk to the people most affected by that story which are Americans.

STELTER: I thought the book was mostly going to be about the reporting so far but you’re saying it’s also going to have new information from the documents.

GREENWALD: Yeah there are stories that I felt from the beginning really needed the length of a book to be able to report and to do justice to, so there’s new documents, there’s new revelations in the book that I think will help inform the debate even further.

STELTER: Do you feel the Pulitzer and the Polk award and the other awards you’re going to be accepting in the future for this reporting as well legitimizes the reporting in a way that might change people’s minds?  Maybe take a random person who doesn’t believe the documents should have ever been leaked and maybe persuade them that they in fact should have been leaked or do you think people’s minds are already made up about this topic?

GREENWALD: No I think we’ve seen a lot of flux in public opinion polls where large numbers of people who were originally were quite hostile to Edward Snowden and the reporting have come to view the disclosures much differently and sure if it were just a matter of a single award I don’t think that would persuade anyone but given that pretty much every single major journalism award in the western world has recognized the vital importance of these disclosures…I think the cumulative effect of all of that is to convey to the public that this information needed to get out and it was in the public interest that it did so and I do think that can sway a lot of people to understand why Edward Snowden did what he did and why we did what we did.

STELTER: Glenn Greenwald thank you so much for joining me and congratulations.