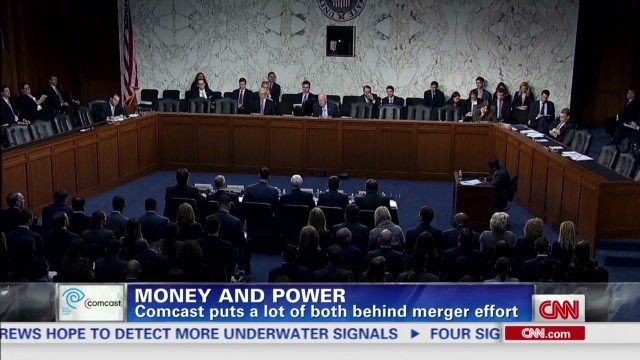 Sen. Franken: “I don’t like this revolving door between regulators and Comcast” on CNN’s Reliable Sources

During the interview, Franken said to Stelter, “I don’t like this revolving door between regulators and Comcast.”

STELTER: “I hate my cable company.” You hear people say that all the time, right? Even cable companies admit customer service is a big problem.

So, here’s a question: will the $45 billion plan for a mega merger between Comcast and Time Warner Cable make that service any better? A lot of consumer groups say no. And they showed up on Wednesday on Capitol Hill to watch company executives face off against the Senate Judiciary Committee.

There were a lot of tough questions to ask about this proposed merger, so you might have expected a lot of fireworks at the hearing. It turns out not so much. It was actually quite a snooze. Why is that? Is that because of the vast sums of money Comcast spreads all over Washington?

It’s a question I think you have to ask because Comcast is known as one of the biggest spenders in all of politics. It’s got an army of lobbyists, more than 100 of them, registered here in D.C.

The company’s critics say it is way too cozy with government. For example, did you know that a former FCC commissioner is now a Comcast senior vice president? Or that Comcast CEO, Brian Roberts, played golf with President Obama last year? There are lots of examples like that that critics dig up.

Like Orrin Hatch, Republican of Utah. Here’s what he said at the hearing about the possible merger.

SEN. ORRIN HATCH (R), UTAH: I know some of my friends here have never met a merger they liked. Too often, government intervention in such matters risks harming consumer welfare and innovation by protecting insufficient competitors from market forces.

STELTER: Senator Hatch likes the deal and Comcast likes him, really likes him. Over the past decade, he received more money than any other Republican senator on the committee from Comcast, that’s $45,000.

Let’s be clear, of course — we have no evidence that those donations influenced his thinking on this matter. Comcast likes Democrats a lot, too. Senator Dick Durbin got even more money than Senator Hatch did, the most of any senator on the committee — $54,000 over the last decade. But he wasn’t at the hearing on Wednesday.

Another Democrat, Patrick Leahy of Vermont, has received $52,500 over the past decade. At the hearing, he brought up questions, but Leahy did not openly propose the merger.

The truth is that some of the toughest questions on Wednesday came from those who received the least amount of money from Comcast.

Republican Mike Lee of Utah has only received $17,500. But then, again, he’s still a freshman senator, but here’s what he said on Wednesday.

REP. MIKE LEE (R), UTAH: I’ve heard some concerns expressed that the emerging Comcast, the post-merger Comcast might have the incentive or even the predilection, but certainly enhanced capacity due to its larger size to discriminate against types of content, including political content.

STELTER: And who is the senator who is way down the bottom of the list of Comcast generosity? That’s Al Franken, Democrat of Minnesota. On Wednesday, he was the only one to openly oppose the merger.

So, what is the relationship between all this money and how the senators treat cable executives and treat this merger? And why does Senator Franken think this merger is such a bad idea?

He joins me now to talk about all these issues.

Senator, thank you for coming here.

STELTER: I was rattling off some examples on the introduction of Comcast donations to lawmakers. It seems very difficult to believe it doesn’t have some effect on the response that Comcast is getting now from Washington.

Do you worry about that? Do you worry, for example, that one of the former FCC commissioners now works for Comcast, that we see that kind of coziness between government and business in this case, and that it may cause the deal to win approval?

STELTER: And the money specifically, do you think it influences your colleagues on Capitol Hill?

FRANKEN: You know, I think Comcast does give money to people who support them, not necessarily to buy their support, but — yes, I really don’t like the role of money in politics, and I think it’s gotten worse and worse and worse. I think Citizens United was a very disturbing pernicious ruling. I think this latest McCutcheon ruling was awful.

So, you know, it’s just giving more power to those who have money.

STELTER: And Comcast would say, you know, Senator Franken used dozen fundraising appeals in the past, when NBC proposed merger was happening. What do you say to that?

FRANKEN: Guilty as charged. I mean, I basically said I’m against this, I have some experience here. You know, as I said, I got over 100,000 people writing me saying, don’t allow this to happen.

FRANKEN: Well, that speaks volumes about how anti-competitive this is. You know why they don’t speak out? They come to my office and say, this is off the record. Then they talk about how it’s going to be anti-competitive, but —

STELTER: You can’t name names, then?

FRANKEN: No. They’re afraid of retaliation. Doesn’t that tell you everything you need to know?

STELTER: What form of retaliation? Taking channels off or paying less for the channels?

STELTER: Have you encouraged some of these content owners to speak up?

FRANKEN: Yes, you can encourage them, but they think, you know, they are committing business suicide by, you know, that they’ll be retaliated against, and that shows you what’s wrong here.

STELTER: It speaks to the closed system of cable and satellite distributors.

STELTER: Ultimately, this deal is most importantly about broadband Internet.

FRANKEN: It’s most importantly about broadband Internet. And about 30 percent of the country has only one choice in broadband, and another 40 percent has only two choices. That’s 70 percent of people in America that have two or fewer choices in Internet broadband.

STELTER: Do you see any way this merger would help consumers? Are there positives to this? Are there silver linings?

FRANKEN: You know, I can’t see one. I mean, I really can’t. This is — look, Comcast has been shown to leverage their position. And I’ll give you a perfect example of the leverage. They were told by the regulators, you have the neighborhood. Now, what’s the neighborhood? Well, we’re on CNN right now.

STELTER: Do CNBC, Bloomberg, FOX News should all be around us on the channel?

So it should be next to CNBC so that people see Bloomberg and say, oh, I’m curious about Bloomberg.

STELTER: This wound up in litigation for years.

FRANKEN: Yes, but they were supposed to neighborhood it and they didn’t. They put Bloomberg out in the nosebleed seats. Why? They wanted more people to watch CNBC.

STELTER: You spent more time on the camera than just about anybody on Capitol Hill. You rarely do television interviews, why is that?

Basically, I won, by 312 votes. I think, the people of Minnesota wanted to know that I was going to focus on them and on the job, and I — that’s what I wanted to do.

STELTER: Would you go on the new “Late Show” with Stephen Colbert next year? What do you think of that announcement?

FRANKEN: I think Stephen is just brilliant, and I think every comedian and every satirist feels the same way. I think it’s a great choice. It’s going to be interesting to see him do it as himself. I mean, this is — and not in character.

STELTER: He’s going to have to really reinvent himself.

FRANKEN: Well, and isn’t that a great thing, to reinvent yourself? Now, it’s a high stakes reinvention but because he’s been that character and the way he sustained it and the way he grew, I just think he’s absolutely brilliant.

STELTER: Senator Franken, thank you for joining me.

STELTER: By the way, we’re going to keep trying to book Brian Roberts or David Cohen from Comcast.