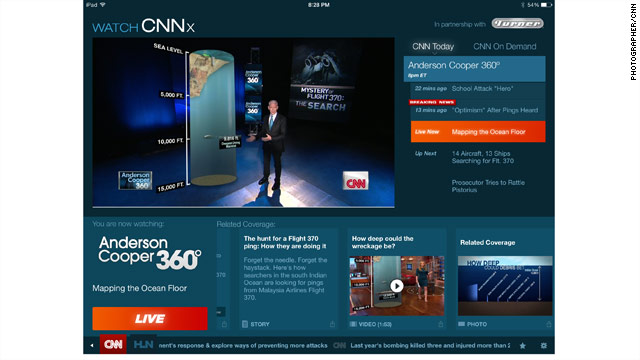 CNN announced today CNNx, a next-generation product that gives viewers unprecedented control over their TV news experience.  Through Watch CNNx users can access 24 hours of program rundowns and select on demand the segments they want to view.  In addition, the product pairs in real time the power of CNN’s TV Everywhere initiative and a wealth of complementary digital content.

After logging into Watch CNNx with their TV provider username and password, viewers can:

Available via the CNN App for iPad to customers of select TV providers today.  It will be offered to all TV subscribers later this year. Additionally, Watch CNNx will debut on set-top boxes and CNN.com by the end of 2014.

How to use Watch CNNx

CNN Worldwide was the first U.S. news organization to stream its full CNN and HLN networks online and on Apple devices in real-time, including commercials. CNN’s TV Everywhere option is available to more than 85 million homes and has more than 160 distribution partners.  In 2013, 721 million hours of CNN TV content were consumed via the TVE platform.  (Source: Omniture, Bango 2013)