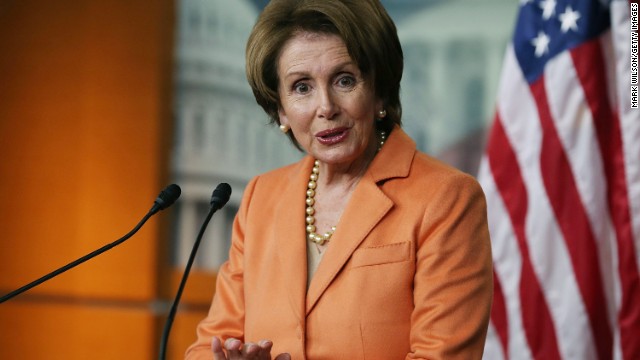 Today on CNN’s State of the Union with Candy Crowley, House Minority Leader Rep. Nancy Pelosi (D-CA) spoke to CNN in an EXCLUSIVE interview about the Affordable Care Act, midterm politics, and the double standard for women in politics.

During the interview, Pelosi told Crowley, “Vice President Cheney set a tone and attitude for the CIA… I think he’s proud of it.”

Nancy Pelosi on Hillary Clinton, women in politics: ‘I never expected anything but a double standard’

Pelosi: Cheney is ‘proud’ of Bush-era CIA that misled public

A transcript and video from the interview is available after the jump.

Pelosi: I Expected a Double Standard

CANDY CROWLEY, HOST:  Joining me now, the top Democrat of the House, Congresswoman Nancy Pelosi of the great state of California.

Thank you for being here with us.

CROWLEY:  It’s a pleasure to host you here.

Lots of issues this week, so I want to see if I can tick through and — and get your take on them.

Uh, one of them is the Affordable Care Act, which is launched into effect now, as of March 31st, mostly.  One of the president’s former senior advisers, Robert Gibbs, still close to the White House, said that he didn’t think that the employer mandate, that is that part that said, if you have a certain amount of employees, you either have to cover them or pay into ObamaCare.

Um, he didn’t think that that would go into effect.

As you know, it’s been delayed twice because they’re having problems with it.

Do you think it will go into effect?

PELOSI:  Well, of all the things that I want to say about the Affordable Care Act, uh, Robert Gibbs’ opinion, I don’t know who his clients are or what his perspective is, but we are celebrating the fact that we have over seven million who have signed up, not counting the 3.1 million who are a — on the policies of their parents until they’re 26 years old, not including over three million and probably closer to five million on Medicaid, which would bring us close to 15 million people who, uh, now have quality, affordable health care.

PELOSI:  It’s really pretty exciting for those of us, uh, who made this fight, the employer mandate, the individual mandate, all an integral part of giving people, uh, the eliminating…

CROWLEY:  So you think it’s integral?

You think the employer mandate is integral…

CROWLEY:  — and will and has to stay?

CROWLEY:  But to — to put a period on it, you cannot be supporting anything that would remove the business mandate?

PELOSI:  No.  No, no.  I mean the — I don’t know we’re focusing on that.  One person says one thing. Seven million people…

PELOSI:  Seven million people signed up.  The Congress of the United States, which wrote the bill, the members are so proud of what they have done, uh, are happy to, uh, not run away from what we have done.  We’re very proud of what we have accomplished.

CROWLEY:  Although, you know there are just — since you say that, there are folks, um, who are running campaign ads, Democrats, distancing — distancing themselves…

But, you know, that’s the exception.  Democrats embrace The Affordable Care Act.  We’re very proud of it.  And, uh, to, you know, anecdotally, if you hear this, that, and the other thing, that’s exactly what it is.

And the plural of anecdote is really not data, it’s — it’s a few examples.

But there are a couple of hundred Democrats in the House who are proceeding in a very positive way.

CROWLEY:  Let me ask you about the…

PELOSI– …about the Affordable Care Act.

CROWLEY:  — the Supreme Court ruling this week on campaign, um, finance.  And basically, it said that people can donate as much as they want in the aggregate, that the — you still can only send a certain amount to a congressperson, but you could send it to every congressperson. So there’s not aggregate limit anymore.

CROWLEY:  You have said, bad idea, you don’t like it.  On the other hand, aren’t you prepared to use it?

PELOSI:  It won’t make any difference to me.

CROWLEY:  — some of these donors and…

PELOSI– It won’t make a difference to me.

CROWLEY:  — but for your members, because you’re — part of what you do, uh, is — as majority — as a minority leader is to go out and help others get elected.

So won’t you go back to these who have maxed out under the old limit and say you can give more now?

PELOSI: No.  What we’ll do is — I’m a big believer in donor’s choice.  And — and as we’ve — we’re respectful of the fact that people have not only federal limits, but they have personal budgets.  And the people that I talk to are very idealistic about, uh, the environment and children being educated and the rest of that.  This is not a pragmatic agenda.  It is a — an agenda for the future. And that’s what this becomes.

CROWLEY:  Because my question is… the game is what the game is, and so they’ve changed it.  So would you still use, if you needed to pump up a race here or there, if there’s no limits to the overall amount that a donor can spend, you’re going to go back to it…

PELOSI:  Well, it’s the donor’s choice.  And the donor — when it comes to individual races, it’s donor’s choice.  And, uh, it’s just really a bad idea.  And I’m — shall we say, ironic thing, or maybe ironic is not the word, is that we have to raise money to win the election so we can reduce the role of money in politics.

CROWLEY:  Moving to the CIA, and, a report that we’re still awaiting, but may get soon about, uh, the CIA’s, what we are told is the CIA’s misrepresentation…

CROWLEY:  — of what was actually going on with these so-called enhanced interrogation techniques, torture, depending on, you know, who’s describing it.

CROWLEY:  You have blamed that on the highest levels of the CIA, that misrepresentation.

PELOSI:  I mean I do believe, uh, that during the Bush-Cheney administration, uh, that Vice President Cheney set a tone and an attitude for the CIA.  Many people in the CIA are so patriotic, they — they protect our country in a way to avoid conflict and — and, uh, viol — violence, etc.

But, uh, the attitude that was there was very, um, I think, it came from Dick Cheney.  That’s what I believe.

CROWLEY:  And if that happening could be proven and is, in fact, uh, came from the vice president’s office, is there a net result of that or is that just here’s a report and then move on?

So it was a — it’s been a — an interesting week.  We had the seven million.  We had the, um, the “McCutcheon” decision, as you mentioned, the CIA report…

PELOSI:  But we also had the Republican budget which came out.  And I call it the ideological manifesto of the — of the Republican Party.  It is a budget that takes us so into the past as compared — or, shall we say, contrasted it with the Democratic budget that is about the future — investments in growth, education, science, innovation…

CROWLEY:  Are you going to put a budget up next week, the Democrats?

CROWLEY:  And does it balance?

PELOSI:  Uh, it — it’s about growth and growth will take us to balance.  It takes us to about a — a 2 percent of GDP deficit, which everybody says is…

CROWLEY:  So it assumes…

CROWLEY:  — it assumes growth to balance?

CROWLEY:  Let me talk politics with you in our final minutes here. Hillary Clinton this week, uh, was opening up a — a women’s forum.  She was asked about a double standard and said did she think that the media covered, um, there was a double standard in the coverage of women of — of power?

And she said the double standard is alive and well and I think, in many respects, the media is the principal propa — propagator of its persistence.  I think the media needs to be more self-consciously aware of that.

Do you agree with that?

Do you think that the media has a double standard for women of power?

PELOSI:  Well, let me just say that as one who has, you know, been the speaker of the House, uh, I’ve had to have a very thick skin about every kind of thing that was thrown at me.  In fact, what’s sad about it is women say to me, I would run for office, but I could never put my family through.  I don’t want my children coming home crying because of what somebody said about me and that the media just kept repeating and repeating and repeating, where if it were a man, they might not.

If Hillary Clinton thinks there’s a double standard, she’s — she’s been in the main event, that is, the presidential race, then I respect that.

From my own standpoint, I never expected anything but a double standard.  I don’t know if it’s the media or people say things that’s news that you have to cover.

Uh, but I don’t think that from the — from equal pay for equal work, there’s a double standard all the way up to the top echelons…

PELOSI:  — and that women who want to be in the public arena have to, uh, to expect some of that.

CROWLEY:  Do you have every intention of running again…

CROWLEY:  You’re on on the ballot?

PELOSI:  That would be totally up to my members.

CROWLEY:  — you could say I don’t want to be speaker.

PELOSI:  No, but it’s up to my members.  Uh, I actually did not necessarily want to be leader again (laughter), but they wanted me to be, so, uh, here I am.

CROWLEY:  The speaker is pretty different from leader, right, you would know that best probably.

PELOSI:  It’s very important.  And a — I think that when they see the obstruction of the current speaker, they understand the awesome power of the speaker, where many people didn’t realize what the speaker was before.  They just didn’t know.

But the speaker has a — a great deal of power and, you know, it — I’ve had my opportunity to do that.  We passed the Affordable Care Act, Wall Street reform, Lily Ledbetter, “Don’t Ask, Don’t Tell” repeal.  We did so many things, uh, even some things with President Bush, where we had a great deal of cooperation.

CROWLEY:  Right.  It sounds like it might be OK to do it again, though, if you had the chance?

PELOSI:  Well, the most exciting thing is to represent the people of San Francisco in the Congress of the United States.

CROWLEY:  — I have to ask, Jim Moran, who is retiring, Congressman from Virginia, said that he thinks that — that Congress people are not paid enough.  Uh, and that there should be, you know, maybe a higher per Diem whatever.

Now, he’s retiring, so he’s got no skin in this game particularly.

But would you agree with that?

He — he said that a lot of members, quote, “can’t afford to live decently in Washington.”

PELOSI:  Well, I would just say the time is not now for that, while we have, uh, the challenge that we have for our economy and so many people out of work, where we have budget deficits that we need to address, uh, and that perhaps we should be saving that for another day.

CROWLEY:  Thanks for coming on.