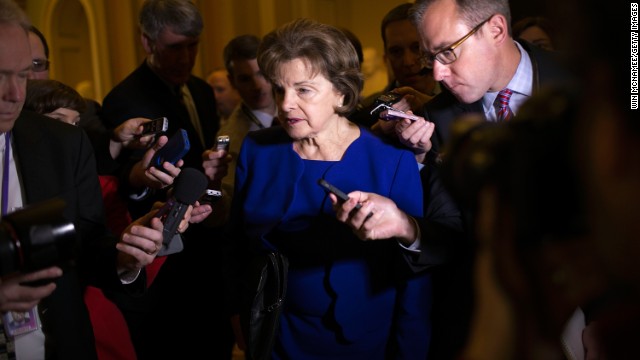 Sen. Feinstein on CIA spying: “This is a serious issue”

Today on CNN’s State of the Union with Candy Crowley, Sen. Dianne Feinstein (D-CA), chair of the Senate Intelligence Committee, spoke to Crowley about the possibility of terrorist involvement in the disappearance of MH370, her feud with the CIA, NSA metadata recommendations, and the Ukraine-Russia crisis.

During a discussion about the CIA spying on her staff, Senator Feinstein said, “It isn’t the first time, it is actually the third time. So, this is a serious issue.”

For more information, check out the following blog post.

A transcript and videos of the interview is available after the jump.

Feinstein: Time is of the essence

CROWLEY: Joining me now is chairman of the Senate Intelligence Committee, Dianne Feinstein of California.

Let me ask you — and use your position as chairman of the Intelligence Committee, and ask you if you are convinced that there is not a terrorism element to this missing plane.

FEINSTEIN: Well, so far there has been none. And but there is speculation, but there is nothing. And I think the commander really summed it up. It is a very, very hard situation because they really don’t have what they need to carefully calculate a reasonable area where the ship may be.

So — where the plane may be. So this is a very difficult mission. I think it’s the fact that so many nations are participating that they’re getting more ships, more planes, a little bit more direction, being flexible, changing the places where they look. I think all of this is good.

But it also indicates that there is no real method of calculation that’s functioning very well.

CROWLEY: One of the things the commander also mentioned was the satellite pictures that we’re seeing. And they’re, OK, they could show us a collection of stuff. But they can’t really show us what that stuff is. Because I wanted to ask you about these satellite pictures, because there is a lot of questions when you see them. They’re kind of fuzzy. You can’t really tell. Here’s one. You know, look down; you can see stuff in the ocean.

I want to compare it to something else, which is a satellite picture of the bin Laden compound in Pakistan. That, you can see trucks. You can see housing.

And I’m told a lot of this has to do with the angle of the satellite, that you get blurry the more out of angle the satellite is.

But there are a lot of people who don’t believe that the U.S. and others with sophisticated technology can’t actually see better than the pictures we’re seeing.

CROWLEY: Can we assume that the U.S. does know more or can see more than we’re seeing as relates to this plane?

FEINSTEIN: Not necessarily. I would answer that that way. I don’t know whether more sophisticated satellites could be turned on to this area. I just don’t know.

CROWLEY: Turned over time, because it has been three weeks, whether they could do that.

FEINSTEIN: No, have not.

CROWLEY: Have not. And have no more broader information of what happened to this plane or what might have happened?

FEINSTEIN: No, and you have to understand that American intelligence doesn’t gear itself to be ready for plane crashes. That is not its job. Our job is terrorism and missile defense and that kind of thing.

CROWLEY: And given the kind of equipment that the U.S. has, other nations have, has there been enough cooperation and back and forth between the intelligence services in the U.S. and those responsible in Malaysia?

How is that relationship?

FEINSTEIN: Well, I’m sure, if asked, our intelligence services would provide whatever data they could. They probably do not have data.

FEINSTEIN: But it would have to — the Malaysians are in charge of this. And so they’re using the techniques that they know, which may very well not be the most sophisticated.

CROWLEY: Right, do you think the Malaysians have given our folks that could be helpful, either on the technological side or on the intelligence side?

Has that side been cooperative?

FEINSTEIN: Well, I would leave that decision to people who have participated in this. I would suspect that, when you have one country in charge, that for countries that may have more sophisticated equipment, that may be difficult. You can offer but you cannot demand.

And so the Malaysians would have to ask.

Now certainly the Chinese have sophisticated equipment and I don’t know whether they have been asked either.

CROWLEY: Well, they’re in it whether they have been asked or not. I think their satellite pictures, by the way, are also incredibly blurry.

But I want to move you on because there are some other topics we want to get to. And that is first of all what is the state of play in your dispute with the Central Intelligence Agency which you think went into a Senate computer that was provided by the CIA in a safe location. You believe they took things out of it regarding your investigation into torture by the CIA.

FEINSTEIN: Well, I — I don’t know if you have noticed but I have done no press after I made a 40-minute speech on the floor. The speech was carefully put together. I believe it is accurate. And I believe those words should stand.

The problem is that the CIA went into Waldoff senate computers in a bona fide investigation that is being done of the detention and interrogation of detainees. Having said that, that is a problem. And it isn’t the first time, it is actually it is actually the third time.

So this is a serious issue. I have asked for an apology and statement that it would never happen again. I have not received this to this day. That is of concern to me and I would really like to leave it at that.

CROWLEY: Can you tell me, have you had any reaction from the CIA to your floor speech? Are you on speaking terms? Is there a back and forth?

FEINSTEIN: Oh, yes, we’re on speaking terms. We just had a very good hearing on Syria Thursday and we will be doing other things, as well.

We are in the process of doing a further investigation on all the intelligence programs of this country. The irony is that the NSA program of data collection is the most overseen program we have. And there are thousands of other programs that need a look at and need some method to track them, follow them, evaluate them. And that is our next big effort after we finish this detention and interrogation report.

CROWLEY: Right. And I want to ask you about the NSA. But you’ve heard what the CIA director John Brennan had to say. And he said we don’t hack into computers. From the folks that I have talked about that are looking at this from the agency and elsewhere, they say listen they knew that we could get into this computer and that there was what they called audit capability. And that this was simply a part of that.

FEINSTEIN: Well, that is not correct. And I really do not want to discuss it further.

CROWLEY: OK. All right. We will leave it there then.

CROWLEY: The president has said what he wants is a bill that will take the storage of NSA phone data, what number called what number for how long and where, and leave it with the phone companies. And then require a FISA — a warrant for the feds to ask for that information. Both of those things are all right with you and how soon?

In the first place, the House has a bill, it is passing to do some of that. The president has said he would send us a bill and I hold him to this word because it is very important that we receive bill language as to exactly what the administration intends.

Here is the issue, the issue is whether the telecoms, all of them, are willing to hold this data. When we talked with them, they were not. They would most likely have to be compelled legislatively in a bill, which did so. And also offered liability protection, liability immunity when they participate…

CROWLEY: So if someone is spied on they’re not held…

FEINSTEIN: That is correct. So that is one thing.

What the president is proposing is that data only be held for 18 months instead of five years. That is a good suggestion, that the hops — the of number — if I were the principal terrorist calling you in the United States, that is one hop, the hops would be held to two as opposed to three. That is a good question comes, can a bill be passed. It is very controversial. There are a lot of different views right now. Can people come together to pass a bill?

The program itself, sunsets next year. So whether we take action right away I think remains to be seen. I am open to that action.

My concern has been, and let me state it very clearly, that if this is held by a large number of telecoms with their people doing the actual querying, is privacy, as controlled as it is with 22 vetted people at the National Security Agency who are supervised and watched with everything they do here, the final element that I think is a positive element that would come into this, is that there would be a court approval of every query. I would support that. I happen to think if it can be done an emergency basis, because time is of the essence, that that is helpful.

CROWLEY: I only have about a minute left, so I want to quick get you a question about Russia and the U.S. and the Russian troops along the eastern border and other parts of Ukraine, not just Crimea.

We now see Putin calling the president, we see John Kerry meeting with his counterpart, which suggests that perhaps Russia is open to some diplomatic overtures with Ukraine. But the key question here now I think for the U.S. is what are those troops doing along that border? What — you see the intelligence, what do you think they’re doing along the border?

FEINSTEIN: Well, I have seen that intelligence. I can’t tell you what it is, but I can give you my view of what I have seen.

There is no question that there are 40,000-plus troops that they are staged in various areas. That to people who watch this, it looks like an invasion force. Putin has said it is an exercise. So that leaves a big question mark.

The Crimea is dominantly Russian, a referendum was passed. That, I think, has been done. But Ukraine is a different subject.

CROWLEY: So to you, you get the Crimea thing.

FEINSTEIN: I get the Crimea thing. The Ukrainian situation is very, very different. And I have deep concerns, I have a deep persuasive hope that Russia has fined, as has been termed, an off-ramp and not go ahead with this. And that diplomacy is made to make up for it.

There are many good things that Russia is going to gain in trade. I mean, one of them is the signing for an agreement for a gas line in May with China. Now, whether this happens or not becomes questionable, because the Chinese have long been concerned about Russian aggression on another border.

So this is a big issue that needs solution.

CROWLEY: Thank you so much. Never enough time. Dianne Feinstein, come back again.

FEINSTEIN: Thank you very much.