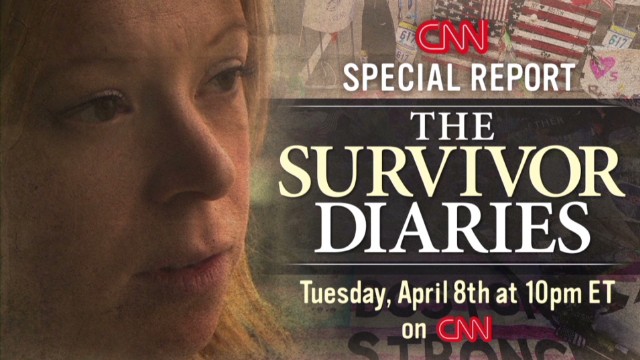 “CNN Special Report: The Survivor Diaries” premiering Tuesday, April 8th at 10pm ET on CNN, follows the journey of  professional dancer Adrianne Haslet-Davis, a Boston Marathon bombing survivor who had her lower left leg amputated after shrapnel tore through it. Haslet-Davis agreed not only to allow CNN to follow her journey to recovery, but also agreed to film her everyday life in video diaries. The exclusive videos she shared with CNN paint a raw, honest and at times heart-breaking picture of a woman battling extreme physical and emotional challenges.

The riveting one-hour documentary, hosted by Anderson Cooper, will take viewers through Adrianne’s journey from her tentative first steps in a prosthetic leg to her making good on her promise of a dance lesson for Anderson Cooper. Cooper first met Adrianne in her hospital room just one week after the tragedy and during their interview she vowed that she would dance again. Cooper was inspired by her resilience in the face of such adversity. “From the first time I met her, I knew that if anyone could overcome such huge odds and dance again after such a traumatic injury, it was her,” said Cooper. He was also heartened, but a bit intimidated, by another promise Adrianne made. “She told me once she was dancing again, that she’d give me a dance lesson. I’m a horrible dancer so I need the help,” said Cooper.

Throughout the documentary, viewers will see Adrianne wrestle with the mental scars of surviving a near-death experience as she struggles with accepting her new reality as an amputee. Adrianne’s determination to dance again stands as a testament to the human spirit. “I insist on being called a survivor and not a victim,” she said “and I’m not suffering. I’m thriving.”