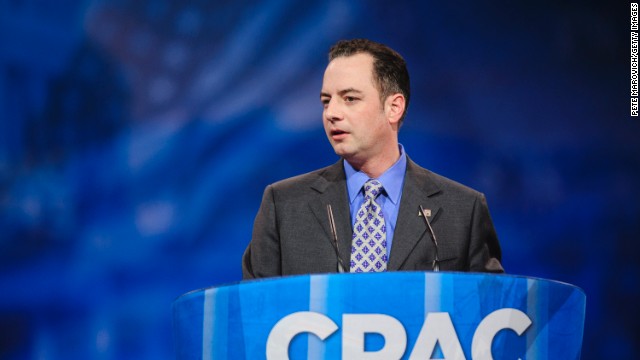 Reince Priebus: “Dems are lying in wait to pounce”

During the interview, regarding the Republican Party’s language choices in the discussion on poverty in the U.S.,  Priebus  told Crowley, “We are the ones leading the way, I think, in this country on these issues.”

For the latest updates and information, check out the following blog post:

A transcript and video from the interview is available after the jump.

Getting to Know Reince Priebus

CROWLEY: A part of that ad and joining me now Reince Priebus, who is chairman of the Republican National Committee. This is a long- term goal obviously…

CROWLEY: …reaching out to voters. But there have — one of the other things that, you know, you have talked about is, the tone, how you talk to people, Republicans in the past, particular candidates have gone off the rails for saying certain things. And so with that in mind I know you’re good friends with Congressman Paul Ryan. He was talking about inner cities and how — he’s done a poverty tour as you know and trying to come up with some solutions there. And he had this to say which was widely criticized. I want to play a bit of it.

REP. PAUL RYAN (R), WISCONSIN: We have got this tailspin of culture in our inner cities in particular of men not working and just generations of men not even thinking about working or learning the value and the culture of work. And so there’s a real culture problem here that has to be dealt with.

CROWLEY: You know Democrats took out after him and said this is code for black people are lazy, that, you know, African-Americans or Hispanics don’t really want work. Was this as artfully phrased, is this the kind of thing you’re talking about?

PRIEBUS: Well, I’m not sure. I mean, Paul said he thought it was inarticulate but quite frankly, I mean, Democrats are lying in wait to pounce on whatever might be off tone. But here’s what I would say. Why was Paul talking about this? The reason he was talking about it is because he’s devoted a large part of his life starting back when he worked with Jack Kemp on finding ways to tackle poverty, to free up capital, to create opportunities in urban areas around this country. He was actually touring the country with Bob Woodson, who is a civil rights leader, and he’s coming out with a book as well on some ideas on how we can tackle poverty in this country. I would say that Republicans like Paul Ryan, Rand Paul, who are talking about this very issue is what is important to our party.

CROWLEY: I think you’re absolutely right. But sometimes the language — it isn’t — I don’t even think that the critics question the motivation.

PRIEBUS: Right. So when Joe Biden says, you know, to free people up from the chains. And he makes — we don’t talk about that. But we talk about Paul Ryan who’s devoting his entire momentarily at least, his entire life right now in this moment to talk about this issue. I mean Republicans around this country are talking about issues that affect everyone. Affect whatever race, whatever gender. I mean, we are the ones leading the way, I think, in this country on these issues. And so I commend Paul for his work that he’s doing around the country.

CROWLEY: One of the last things on this I want to ask you about, Florida, 2013. You had a great victory this week. But CPAC, I know you attended, there were lots and lots of speakers. When you looked at the rundown, it struck me because you have done (INAUDIBLE) this push for minorities and for women. There were two women, main women speakers from the podium. And isn’t that the sort of message when women look at the Republican Party, where minorities look at the Republican Party, they don’t see themselves in it. And I know it’s about issues and that you all have, you know, crafted issues and done as you mentioned Rand Paul and Paul Ryan are out looking for solutions and things you talked about with poverty, but these sorts of things, the words in the pictures matter. What can you do to correct that kind of thing? Because …

PRIEBUS: Well first of all, I mean, we don’t run CPAC but I thought it was a great week of, you know, talking about conservative principles and I think it’s important for a party to go to places that we’re strong and also go to places that we’re weak. But what are we doing? We are doing things like this 14-state ad campaign, talking to everyone in every state, talking about what brings everyone in this country together around the Republican Party. About creating your own American dream.

Candy, it also means taking a national party like we did last year and historically changing the very nature of how we do business. We are putting people in every single battleground state across the country, every single community. We have a historic engagement effort in Hispanic, Asian and African-American communities not just five months before an election but for four years. This is what we do. We are a campaign committee. But one of the things we didn’t do well in the past is communicate on a long-term basis in diverse communities across America. And what we’re changing is that every day and every week, we’re in these communities talking about the Republican Party. I think that’s important. That’s how you change things.

CROWLEY: You had a victory in Florida’s 13th Congressional District.

CROWLEY: The Republican won replacing a Republican — deceased Republican. What is the lesson that you drew from that? Because it’s awfully hard, you know, sort of translate from March to November. But what’s the lesson you drew?

PRIEBUS: Well, I mean, Obamacare is complete poison out there in the field. And so the lesson is going to be, number one, you have to hit your main target which is Obamacare. But secondly, David Jolly gave a positive vision. I mean he talked about tax reform, he talked about, you know, issues that are affecting a lot of seniors around the district that he represents. We had — he had a position on Obamacare which was obviously positive for him. He had a positive message besides Obamacare. And we also had an effort that was cooperative with the RNC and the state party where we were taking some digital advances that we had made, some walking applications that we had put in the field, and our data was talking to our political field operation on a — on a historical way for our party and it worked.

CROWLEY: Let me ask you quickly about Senator Ted Cruz who has been fund-raising for one of the outside groups. A conservative outside group that is working to defeat Senator McConnell, is that OK with you?

PRIEBUS: Well I don’t know much about it. I think Ted would probably differ with that comment. I think he’s a member of the team and I’m a big fan of Ted’s. I’m a big fan of our entire Republican field. We’re going to have a good year this year and, you know, I think we’re going to win the U.S. Senate and I think that bodes well for the future.

CROWLEY: I got to run. I’m sorry. But I hope you come back and join us.

PRIEBUS: All right. Thank you, Candy.