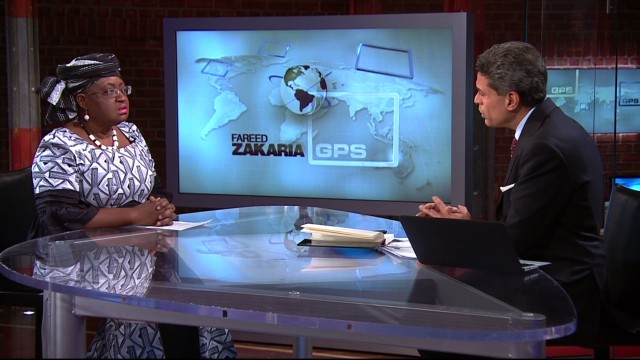 CNN’s FAREED ZAKARIA GPS features an interview with Ngozi Okonjo-Iweala, Nigeria’s finance minister, former managing director of the World Bank, and author of “Reforming the Unreformable: Lessons from Nigeria”, about how $20 billion got lost from Nigeria’s treasury , the suspension of the chairman of the Federal Reserves after he called attention to the situation, and why Nigeria has passed anti-gay legislation.

ZAKARIA (voice-over):  If $20 billion were to go missing from the United States Treasury, people in Washington would certainly sit up and wonder what happened and heads would roll.

ZAKARIA:  Now imagine if that sum of money disappeared from an economy that is just 1.6 percent the size of America’s.

ZAKARIA (voice-over):  That actually happened in Nigeria.  And there’s a twist.  So when Lamido Sanusi, Nigeria’s central banker, their chairman of the Fed and a well-respected economist, sounded the alarm that $20 billion had gone missing, what really happened was that he got suspended.

Why?  Well, that’s what I asked Nigeria’s finance minister when she came to New York this week.

Ngozi Okonjo-Iweala knows Sanusi well.  She’s also a former managing director of the World Bank and is the author of “Reforming the Unreformable:  Lessons from Nigeria.”

ZAKARIA:  Listen in to our conversation.  I began by asking her why the central banker was suspended for blowing the whistle.

NGOZI OKONJO-IWEALA, NIGERIAN FINANCE MINISTER:  I believe that when you find problems, you should also find solutions.  I think the problem began the first time when he said that the amount that was — he never said it was stolen.  He said it was unaccounted for, was $49.8 billion.

And he wrote a letter to the president; he called me a couple of days after, to say I’ve written this letter.  And my first reaction was, that’s not possible.  We couldn’t be missing $50 billion as finance minister in this country.  We wouldn’t be able to function because that’s too high a hit.  Everybody would know it and feel it in the economy.

ZAKARIA:  There is some substantial gap.

ZAKARIA:  — the World Bank, I think when you were one of the managing directors, issued a report on the Nigerian economy in which it said hundreds of billions of dollars over the past 30 or 40 years have been siphoned off.  And so this would be a perfect example of precisely this kind of siphoning off.

OKONJO-IWEALA:  No.  I think we should hold our horses a little bit.  Sanusi please ask him never said the money had been siphoned off.  He said it was unaccounted for.

And hold on.  There’s a difference, because when he alleged $49.8 billion — and this was looked at, it was found that some of that money had really been remitted to the tax agency directly and his people were not aware of it.

So $16 billion was immediately accounted for that, you know, they didn’t seem to know the accounting mode of the agency, so that’s what I’m saying.

But there has been — there’s no doubt that Nigerians feel suspicious of the oil sector, that it has been regarded as opaque over the years and this is not an issue, you know, whether it’s $10.8 billion, whether it’s $1, you know, we can’t afford to lose any money from the treasury.

OKOJO-IWEALA:  You know, Fareed, what I would like to do is perhaps focus on the economy, because I don’t think I want to get into this issue of firing/not firing.  He’s still governor of the central bank.  He has been suspended.  He hasn’t been fired.

But I think we need to focus on the central issue, which is no one dollar should be lost from the treasury.  Any money that belongs to it must be remitted.  That’s what we’re insisting.

And the president, we pushed for — he has ordered one yesterday, that there should be a forensic audit to determine where these moneys, that what is unaccounted for, is it the $10.8 billion that we are saying from the accounts?

We’ve been working on this for two years.

ZAKARIA:  So how do we — how do you solve the problem of corruption?

You’ve been in government twice.  You have a reputation for being extremely honest.

OKOJO-IWEALA:  Well, you know, Fareed, you know with that, there are no easy answers.  But there’s one thing I want to say and repeat.  No one can fight corruption for Nigerians except Nigerians.  Everyone has to be committed from the top to the bottom to fight it.

And I think there are two key things that need to be done all along, and it’s not just in Nigeria.  It’s in many developing countries that you need to do this.

But in our country, you need to, coupled with — by all means pursue those who are corrupt, punish them, you know, make sure there’s no impunity.  But that has to be coupled with something which doesn’t get as much attention, which is building institutions.  It’s unglamorous; it’s work that takes time, but we have to do it.  We have to put it in place.

ZAKARIA:  I have to ask you a question that is not part of directly your portfolio, but it is your government.

Nigeria has always had laws banning homosexuality.  But you advanced a further law which criminalized it so that somebody who is gay would have to spend 14 years in prison.

Why is Nigeria doing this?

OKOJO-IWEALA:  Well, let me say this, Fareed, that, you know, we’re here in the U.S.  And it took 40 to 50 years or more under conversation of, you know, the gay community to get where the U.S. is.

I think that, you know, we need a conversation in the country.  We need evolution.  Ninety-six percent of people support these laws, but I think we need to unpack the laws, for them to see, you know, between being a gay person and between same-sex marriage because the two are compounded in people’s minds and there’s a strong sentiment against same-sex marriage, just as you had here before.

And it’s still evolving.  I think it’s a question of conversation, discussion, evolution, education and engagement over time, just as happened in this country and in Europe.  It’s not something that happened overnight.  So I would say withhold judgment and let us work on this.

ZAKARIA:  Madam Finance Minister, pleasure to have you on.

ZAKARIA:  And we will be back.