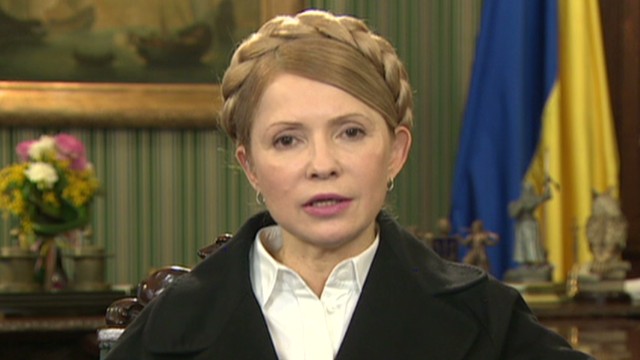 CNN EXCLUSIVE: In her first international interview since being release from prison, former Ukrainian Prime Minister Yulia Tymoshenko spoke exclusively with CNN’s Christiane Amanpour.  In the interview, Tymoshenko told Amanpour that the Russian State Duma “has started listening of the draft of the law of annexation of Crimea from the Ukraine.  It’s only a question of time when it [will] be voted.”  She went on to say “We all know that votes in Duma will be found.  That’s why Russia is escalating the crisis now.  And the world should understand, should realize, that Ukraine on its own won’t be able to solve this issue with Russia on its own.  Absolutely not possible.”

Tymoshenko called on the world to help the Ukraine saying “If it is in hard times, Ukraine is left on its own and is given to Russia – and when Russia is allowed to take away Crimea – then the world will change.  And then not only politics and life in Ukraine will change, the politics and life will change practically everywhere in the world, and then we have to accept to state that in 21st century one country, an aggressor, can violate all the international agreements, take away territories, whenever she likes.”

The full interview will air today on Amanpour at 2 pm ET and 5 pm ET.