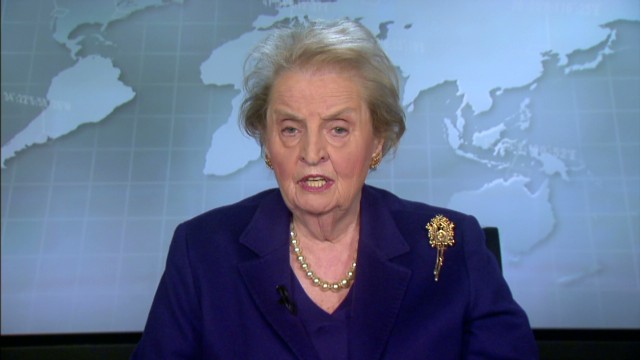 Albright: “Putin may have deeply miscalculated”

CNN’s FAREED ZAKARIA GPS features a discussion with Zbigniew Brzezinski, PhD, former national security adviser (Carter Administration) and counselor and trustee at the Center for Strategic & International Studies, and Madeleine Albright, PhD, former U.S. secretary of State (Clinton Administration) and international relations professor at Georgetown University Walsh School of Foreign Service, about the events transpiring in Ukraine and Russia, and what is likely to happen next.

A transcript of the discussion is available after the jump.

FAREED ZAKARIA, CNN HOST:  Joining me now, Madeleine Albright, who is, of course, secretary of state in the Clinton administration and Zbigniew Brzezinski, who was President Carter’s national security adviser.

Zbigniew, let me start with you; this is about as tense a situation.

What can Washington or the world do to stop Putin from doing what Phil Black was suggesting, which is moving even further and actually moving Russian troops into Ukraine proper?

ZBIGNIEW BRZEZINSKI, FMR. NATIONAL SECURITY ADVISOR:  That prospect, in my view, is by far the more serious one because, in effect, Putin has claimed the right to intervene in Ukraine itself, to intervene militarily by force.

And the Crimean scenario may be a preview of what he’s planning, namely that in some of the eastern regions of Ukraine, which are inhabited by Russian-speaking Ukrainians, some of whom are favorable to Moscow, riots could be staged, they could be provoked by Moscow.

And then Russian troops would enter.  And that envisions (ph) what we have to now deter, prevent, discourage.

And it seems to me that we have to take a stand publicly, offering Russia some sort of participation in an overall international effort to help stabilize the Ukrainian economy and so forth; but privately, at the same time, we have to warn Russia very explicitly as to what might be the negative consequences of Russia in effect attacking Ukraine.

And these consequences have to be very serious because, otherwise, some years from now, we will be regretting failure to act the way we regretted the failure to act after Munich in 1938 and 1939, and we know what followed.

ZAKARIA:  Madeleine Albright, you have often said Munich was the powerful analogy for you in your life.

What can Washington do?

You know, as I say, Russia’s military is much, much larger than Ukraine’s.  The United States and the West are not going to send troops.

How do we deter?

How do we do what Zbigniew was talking about?

MADELEINE ALBRIGHT, FMR. SECY. OF STATE:  Well, I think we do have quite a few tools.  The problem is, we — how to use them all simultaneously.  I do think that it is very important to try to deescalate this.  This is a very, very dangerous situation.

The pictures you showed and the reporting shows how this is on a razor’s edge and I think that it could turn into a civil war.

There are a lot of arms floating around Ukraine.  People are, in fact, really not just demonstrating, but getting angrier and angrier.

I think what is important, though, is to make absolutely clear Europe’s and America’s support for the people of Ukraine, their possibility of having a functioning government, helping them with economic assistance.

The problem of Munich was that the United States was not paying attention and the agreements were made over the head of the Czechoslovaks; they were not part of anything.  And I think that what has to happen here is there has to be respect for the views of the Ukrainians. We have to be supportive of them.

And there are ways that we can ramp up the pressure in terms of, as you suggested, Fareed, in terms of the G8, the G20, looking at what can be done with NATO and basically looking at all the tools that we have in our toolbox.

ZAKARIA:  Zbigniew, what could be done with NATO?

Ukraine is, after all, a member of something called the Partnership for Peace, which is a kind of associate member, if you will, of NATO.

Should we in some way try to engage in consultations with Ukraine to provide some assurances about its defense and to suggest in a sense that NATO might militarily help Ukraine, were something to happen?

BRZEZINSKI:  Well, first of all, I think we have to grant recognition to the new government in Ukraine, which expresses the will of the people.  I think a number of countries are ready to do that and the United States should be among them.  This is now the legitimate government of Ukraine and it has to be recognized as such.  And Russian interference in Ukrainian affairs would be a hostile act.

Secondly and informally, I think we should be putting some NATO plans into operation regarding the deployment of forces in Central Europe, making certain that we’re in a position to respond if the war should spread.

And we should be prepared to indicate to Russia that we’re not going to be totally passive, but we would prefer a peaceful accommodation involving Russia as well.  Leave that option open.

And then, of course, in addition to that, NATO itself can invite the Russians, who are occasionally participating in some committee discussions in NATO, to discuss making sure that the situation doesn’t get out of hand.

In other words, on several levels, complicate Moscow’s planning, give them an option, and, very quietly, make them aware of the massive consequences, very negative for Russia, that would follow the outbreak.

ZAKARIA:  Madeleine, one of the things Russians often say is that the West set the precedent by detaching Kosovo from Serbia, that, at the end of the day, when U.S. secretary of state, you decided that you were going to allow the Kosovars, who wanted to be free and live in an independent state, to go their own way, and we provided military support.

Can they not say that what they’re doing in Crimea is simply the same?

ALBRIGHT:  Absolutely not.  I mean, it’s a completely different situation.  Yugoslavia fell apart as a result of the actions of Milosevic.  It had been going on for a number of years with Slovenia, Bosnia-Herzegovina.  And there is no question that that is something that came internally.

The Russians never understood what was going in Kosovo and did everything they could to block the fact that people there wanted to have their own independence.  So I think it’s a completely different situation and an excuse.

I think what is important is to realize that the Russians, something that you said, in many ways, might be buying something that will cause them incredible internal problems with the variety of ethnic groups that are in Crimea and are, in effect, some of the issues in Dagestan and various places.

So I think that Putin may have deeply miscalculated and we have to make sure that it is clear to him that he miscalculated.

What is interesting is I think we were on our way to trying to figure out how to make Russia a responsible member of the international community.  What has happened, if this goes forward, is they will become — we will make sure that they become isolated and that they really are not part of solutions.

And I — so I do think that we have many options here; preferably it would be to develop some of the things that Zbigniew said in terms of trying to work with them, giving every kind of support we possibly can to the Ukrainians, because one of the tragedies here is this action in Crimea has diverted attention from what is the major issue in Ukraine, which is their economic, very disastrous situation.  And they need a lot of help.

ZAKARIA:  Zbigniew, one final thought, and I’ve only got 30 seconds, but do you think that the Chinese, who would be crucial here, will view this in the way that I suggested, that is, as a violation of another country’s sovereignty?

Or are they, at the end of the day, going to back Russia or abstain?

But to have them have that interest, we have to act in a way that is clear, consistent and decisive.  And I think we have to make it very clear there is a legitimate government in power in Kiev and any action attempting to detach parts of Ukraine from Ukraine using Russian military force is an attack on peace in an era in which there is a sense that we have a collective responsibility for security and the maintenance of peace.

ZAKARIA:  Thank you to the two of you, this is absolutely important and urgent.  Thank you.