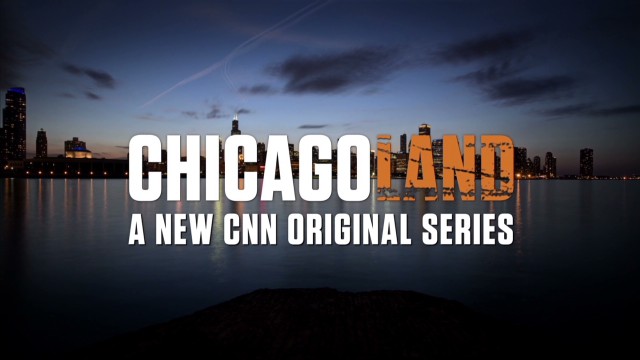 Viewers will witness the riveting real-life drama of the non-fiction ensemble series CHICAGOLAND beginning March 6 on CNN/U.S.  Executive produced by the Peabody Award-winning team that produced BRICK CITY, CHICAGOLAND explores the challenges and triumphs of a beloved heartland American city, where a mayor, community organizers, business leaders, teachers, entertainers, and residents unite to make a difference in the lives of Chicagoans.

Executive produced by Robert Redford and Laura Michalchyshyn of Sundance Productions, and award-winning filmmakers Marc Levin and Mark Benjamin of BCTV,  the series will explore where politics and policy meet real people’s lives – in a city generating change and innovation in social policy, education, and public safety on the local level – to meet national and local challenges.

The vibrant, multidimensional character of the city is punctuated by the rich narration of Pulitzer Prize winning journalist Mark Konkol.  In his 19-year reporting career, Konkol brought his uniquely incisive reportage to covering Chicago’s neighborhoods, City Hall, and the characters that dwell in them for the Chicago Sun-Times and later for DNAInfo.com.  He infuses his strong, authentic sensibility to CHICAGOLAND.

This intimate series explores Mayor Rahm Emanuel’s complex negotiations with the Chicago Public Schools, as he embarks on an historic schools consolidation plan in order to invest resources in modernizing the city.  Viewers will also meet Fenger High School principal Elizabeth Dozier as she mentors her students and attempts to guide them towards making good life choices.  Police superintendent Garry McCarthy works to keep the peace as the school districts are reshaped, and drills his officers in community policing to address a wave of violence that has captivated national headlines and threatens to rob the city of some of its most promising youth.

In the days leading up to the premiere, CNN will offer excerpts of this exceptional series and articles related to the critical issues central to the series that reflect similar debates across the country at CNN.com.  Personal iReport stories submitted to CNN, and curated from Instagram users, tagged with #mychicagoland will explore what this remarkable city has meant to people who love Chicago.

Throughout the series run, users will be able to learn about the production from producers of CHICAGOLAND, interact with the CNN Original Series team, and engage with people featured in the series via social media.  Users of Facebook and Twitter can join the real-time conversations on the themes explored each week via CNN’s Facebook page and via Twitter at @CNNOrigSeries by tagging comments and questions with #Chicagoland.

BRICK CITY TV is the production company of multi-award winning filmmakers Marc Levin and Mark Benjamin.  It was founded in 2008 to create the Peabody Award-winning and Emmy-nominated series Brick City and continuing with Chicagoland.  Drawing from documentary, reality, and news, Brick City TV has established itself as a truly innovative non-fiction storyteller.