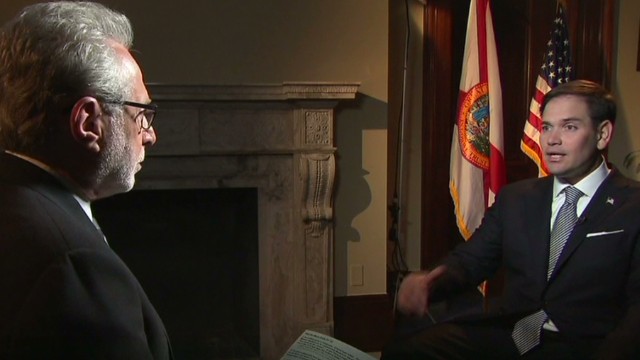 Sen. Rubio to CNN’s Wolf Blitzer: “We are certainly in the midst of a geopolitical battle for influence around the world.”

CNN’s Wolf Blitzer traveled to Capitol Hill to sit down with Sen. Marco Rubio (R-FL) for a wide-ranging political and foreign policy interview. A highlight from Blitzer’s interview aired in the 1 p.m. ET hour and the full interview will air on The Situation Room with Wolf Blitzer, 5-6:30 p.m. ET.

Interview Preview:
THIS IS A RUSH TRANSCRIPT. THIS COPY MAY NOT BE IN ITS FINAL FORM AND MAY BE UPDATED.

SEN. MARCO RUBIO, R-FLORIDA:  Well, I’m not in favor of it.  And we have to understand that part of that is the budget deals that have been made around here.  And the reason those budget deals had to be made is because of a refusal in this place to do anything about the entitlement programs that are bankrupting themselves and our country.  That being said, I find it ironic that at a time, yesterday, where the Chinese attacked Filipino fishermen with water cannons, where there’s tensions between Japan and China, where North — North Korea feels threatened — there was a North Korean Navy intrusion into South Korean waters, with the unrest in the Ukraine that, god forbid, leads to some sort of Russian military intervention, instability in our own region and Iran on the verge of becoming a nuclear power and Syria falling apart and the Middle East so unstable.  At a time of all of this, the U.S. is announcing that we may be having troop levels as low as they’ve been since before World War II.  I think that’s a pretty startling contrast in terms of where our priorities are and what the world’s challenges look like.

RUBIO:  Well, first of all, that’s a — I think that’s all predicated upon how we identify our challenges around the world and what are they.  For example, many of the calculations we have made in terms of our force posture is dependent upon the notion that Russia is complying with all sorts of different agreements that they’ve agreed to.  But we’ve seen on the intermediate rocket and the intermediate missile agreements that they’re in violation of those.  In fact, Russia basically has violated virtually every significant arms treaty they’ve ever entered into and do so to this day.  I think it’s based upon the idea that Iran is not a nuclear power and we could prevent that from happening.  I think it’s based — and I don’t think it’s accurately looking at the expansion of military capability not just from the Chinese, but also from the Japanese.

BLITZER:  So it sounds to me like you — you’re concerned that we could be on the eve of another cold war.

RUBIO:  I’m not — I’m not sure that it would be like the cold war exactly.  We are certainly in the midst of a geopolitical battle for influence around the world.  And I don’t view China as an adversary directly, but I do think China has different priorities and different values on some geopolitical matters than we do.  And they certainly want to drive us out of the Asia-Pacific region as a dominant power.  The same is true in the Middle East.  Iran is trying to drive us out of there.  The same is true in Eastern Europe, where Russia wants to become the dominant power there.  The problem is, none of these three countries, in terms of their government and their leaders, have any respect for human rights or the dignity of people or democracy or freedom of the press.  (END VIDEO TAPE)

BLITZER:  You can catch my entire wide-ranging interview with Senator Rubio later today in THE SITUATION ROOM.  He talks about the situation in Venezuela and a lot of — a lot more, including domestic politics.  And I ask him directly if he wants to be president of the United States.  He gives a very candid answer.  He also speaks about Hillary Clinton and what her prospects are.  The interview in THE SITUATION ROOM later today, 5:00 p.m. Eastern.