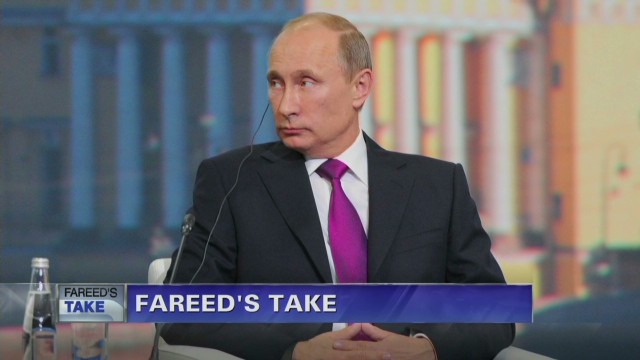 CNN’s FAREED ZAKARIA GPS features discussions about the events transpiring in Ukraine. Radek Sikorski, foreign minister of Poland and one of three foreign ministers who brokered a peace deal between the government of Ukraine and opposition forces, talks to Fareed about this deal. Fred Pleitgen, CNN correspondent, speaks about the whereabouts of former Ukrainian president Viktor Yanukovych and pro-Russian fear. Phil Black, CNN international reporter, also talks about opposition leader Yulia Tymoshenko’s next moves after her release from prison.

A transcript of the discussions and videos of the show are available after the jump.

What in the World? Fixing Spain’s economy

FAREED ZAKARIA, CNN HOST:  Now let’s go to CNN’s Fred Pleitgen in Kharkiv, in the Eastern Russian-dominated part of Ukraine.  This is where former president Viktor Yanukovych is believed to be after fleeing the capital in Kiev.

Fred, is Yanukovych there and what is the mood where you are?

FREDERIK PLEITGEN, CNN CORRESPONDENT:  Hi, Fareed.  Well, that’s a very good question.  No one at this point knows where Viktor Yanukovych is.  As you said, there were some rumors that he apparently came here after leaving Kiev.

Then there were others who said that he apparently tried to get on a flight from the eastern city of Donetsk and fly to Russia.  That was actually confirmed by Ukrainian customs officials.  They said his plane was not allowed to take off because it didn’t have the proper documentation.

At this point in time, it’s totally unclear where Yanukovych is.  There are rumors flying around as to his whereabouts, as to where he might be, but the current government, the new government that’s in place right now, says they just simply have absolutely no idea where he is, Fareed.

ZAKARIA:  What is the mood there?

What is the crowd saying over there about what has happened in Kiev?

PLEITGEN:  That’s a very interesting question, because it’s so different than it is in Kiev.  What you have here is a real divide.  You have many people who are of Russian heritage here but you also have a lot of pro-Europeans, especially younger people.  It’s so interesting, because right behind me, Fareed, you have a demonstration that’s pro-Russians and only a couple of feet down the road, there is the pro-European crowd.

And you can see that here on the street.  Right now they’re demonstrating for a statue of Lenin that the pro-European movement wants to topple, wants to tear down.  They say that’s absolutely not going to happen.  They’ve erected a fence around it and they say they’re going to stay there as long as it takes.

So it really is a very charged-up mood here in the east of Ukraine, very, very different than the scenes of jubilation that you see in Kiev, Fareed.

ZAKARIA:  Thanks so much, Fred.

Let us now go to Phil Black in the capital, Kiev.  It has been a wild turn of events since the peace deal on Friday.

Phil, is Tymoshenko, the jailed opposition leader who has been released, is she now in charge or who is in charge and is everyone listening to this new government?

PHIL BLACK, CNN CORRESPONDENT:  Well, Fareed, I think, at the moment, it is the opposition together acting as one, maintaining unity that are directing events in Parliament.  So in that sense that’s a positive step.

Yulia Tymoshenko, when she was on stage here last night, returning to Independence Square, speaking to the crowd when I spoke to her afterwards, briefly, she certainly sounded like someone who wants to maintain or play a very dominant role in the future politics of this country.

Today, however, she has released a statement, saying she’s not interested in being the prime minister.  The prime minister, under the new constitutional arrangement, will be quite a powerful role.

But her daughter told me that she’s someone who wants to play a role in uniting the country, which I think very strongly implies that she’s got her eye on the presidency.

But she’s going to face competition for that from within her own party, from (INAUDIBLE) while she’s been in prison and of course from the former heavyweight, Vitaly Klitschko, who’s become a very dominant political figure.  These are the people that are going to be interested in the presidency.

So the challenge for the opposition moving forward from here is going to be maintaining unity and not tear down (ph) in this country in the past.

It is not entirely clear what happens to that deal since events have overtaken it.  As the deal was wrapped up, television cameras picked up an exchange between Sikorski and the leaders of the Ukrainian opposition.

Joining us from Milan is Radek Sikorski.

Radek, did you — were you surprised by the turn of events?

Because clearly your great fear, when you were talking to those Ukrainian opposition leaders, was that Yanukovych was going to bring out the army and start firing on the troops in Maidan.

RADOSLAW SIKORSKI, POLISH FOREIGN MINISTER:  Hello, Fareed.  Yes, that was a very tense moment and I think if the opposition hadn’t supported the deal, Yanukovych’s hand would have been strengthened and maybe his security operations would not have disintegrated.

And then what happened was something really strange.  Within minutes of us signing the agreement, the protection, the security forces, started leaving the vicinity of the presidential palace, which they didn’t need to do, and the decompression of the regime started very quickly.

ZAKARIA:  Radek, you lived — you’ve seen this up close in Poland.  You’ve seen in other places.

What do you think is happening?

Do you think that this is now a complete collapse of Yanukovych and his regime?  Will they fight back?

Or do you think the opposition is now firmly in control?

And that, I think, is the source of authority that needs to unite the country.  They need to be inclusive; they need to represent the kind of spirit of compromise that the agreement envisioned and they have to respect the regional and ethnic variety of Ukraine.

I think the Friday agreement has been superseded by events; apart from anything else, President Yanukovych was supposed to sign literally by now the change of constitution.  And we have no news of him having done that.

So you might say that the agreement is not being effected, because events have gone ahead.

But the spirit of it, the compromise, the inclusiveness, the respect for diversity, I hope, lives on and I hope Ukraine creates the kind of government which starts implementing difficult, necessary reforms that will prevent bankruptcy and hopefully put Ukraine back on the European track.

Because, remember, Fareed, your introduction was excellent but it didn’t mention one thing, namely how it all started.  It all started with President Yanukovych refusing to sign the association agreement with Europe and the protests that — against that decision.

ZAKARIA:  Radek, one thing I noticed was that there was a Russian envoy at your negotiations, but he did not sign the agreement.

Then Russian officials, including Foreign Minister Lavrov, have said things that have not been complimentary, to say the least, about the turn of events recently, even characterizing it as a coup.

Do you think Russia will accept what is happening in Ukraine right now?

SIKORSKI:  Ambassador Lukin actually played a constructive role in the negotiation and he initialed the agreement that we reached at dawn.  He was then under instructions from Moscow not to sign it.

But within 24 hours, when still — when President Yanukovych’s authority started unraveling, the Russians actually then began to like the agreement and wanted it respected.

I think, just like President Yanukovych, they also overplayed their hand.  But the new Ukrainian government needs to be in touch, needs to have a conversation with Russia, which is an important neighbor, just like Poland, because, apart from anything else, Ukraine needs the lower gas price and doesn’t want Russia to play the separatist card.

ZAKARIA:  You know, I think it was in George Bush’s memoirs — I might be incorrect, but in George W. Bush’s memoirs, I think he recounts a conversation where Putin said to him, you know, George, Ukraine is not a real country; it is a province of Russia.

I may have this slightly wrong, but that is the general attitude that people assumed that many in Russia, including the — those at the top, feel about Ukraine.

Do you think Russia would ever allow Ukraine to be a fully independent country with an association with the European Union?

SIKORSKI:  Ukraine is a fully independent country and her sovereignty and her borders are actually guaranteed by the Budapest Declaration of the United States, United Kingdom and Russia.

And Ukrayina (ph), Eastern Ukraine, these are large areas.  Ukraine is a country of over 40 million people.  This is no Transnistria, no Georgia.  And playing with separatism would be a very dangerous game.

ZAKARIA:  At the end of the day, do you think the Ukrainian opposition will hold?

I mean, one of your concerns clearly was to get them to compromise.  You’ve been in the room with these people.

Are they — do they have the ability to stay together?

SIKORSKI:  Ukraine missed her chances before, after the Orange Revolution, for example, and some of the players are the same.

And by the way, my sense is that the Maidan wants a new class of people, clean people.  Part of this movement was against kleptocracy.

But there are people in — that I’ve talked to who are capable, who know what needs to be done and who would have the confidence, both of the West and the ability to talk to Russia.