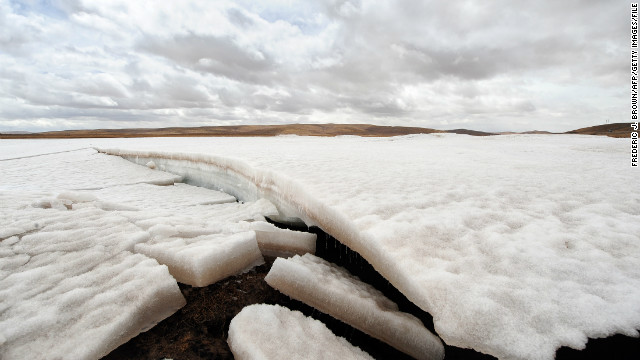 Climate change is not debateable

Today on CNN’s Reliable Sources hosted by Brian Stelter, professor of theoretical physics at the City College of New York, Dr. Michio Kaku, and senior editor at the Huffington Post, Jack Mirkinson, spoke to Brian about the climate change debate, and the false dichotomy of news organizations to equate skeptics with scientists.

A transcript of the discussion and videos from the show are available after the jump.

How “Network” changes the news

The Donald’s fifteen minutes may be up

BRIAN STELTER, CNN HOST:  Let’s begin with an important journalistic statement and it’s something I mentioned in the last segment:  some stories don’t have two sides.  Some stories are simply true.  There’s no necessity to give equal time to the quote-unquote “other side.”  One of these is climate change.

Depending on which study or which expert you consult, between 95 percent and 97 percent of scientists agree that climate change is happening now, that it’s damaging the planet and that it’s manmade.

A case in point last week’s “Meet the Press.”  David Gregory interviewed Bill Nye the Science Guy, who, by the way, is not technically a scientist, and Congresswoman Marsha Blackburn.  She’s a conservative climate skeptic with no particular expertise in this subject.

Whatever “Meet the Press” was trying to accomplish, I don’t think they did it.  Joining me to talk about this and the issue of climate change coverage more broadly, Michio Kaku, the famed theoretical physicist.  He’s a CBS News contributor, the author of many books.  The next one is titled “The Future of the Mind,” out next week; and Jack Mirkinson, a senior editor at the “Huffington Post” who covers the media world.  He wrote a column, titled “‘Meet the Press’ Shows Us Exactly How Not to Cover Climate Change.”

Dr. Kaku, you’re the expert here.  Tell us before we go any further how definitive is the evidence?  Is there any room for debate?

MICHIO KAKU, PHYSICIST:  Climate change is the 800-pound gorilla in the living room that the media dances around.  But in the scientific community it’s a settled question:  95 percent of scientists believe this is happening with 100 percent confidence temperatures are rising.

With 90 percent confidence, we believe it’s human activity and not natural cycles that is driving the increase in temperature on the Earth.

STELTER:  So when you see a television segment that features a climate skeptic or a climate denier, how do you feel?

Do you feel that network or that newspaper or that website, whatever it is, do you feel they’re being irresponsible?

KAKU:  Well, it’s a free country.  However, they should present the facts and that is that the overwhelming majority of scientists in the world who have studied the question believe that the temperatures on the planet are rising.

And if there are skeptics let them present their computer program so that we can pick it apart.  Let us understand this, because science is testable, reproducible and falsifiable.

STELTER:  And you don’t see people who are skeptics presenting those programs?

KAKU:  I see them predict —

KAKU:  — giving no numerical results.  We present our computer programs; they’re testable, falsifiable.  They present, unfortunately mainly ideology, that they’re looking at a scientific question through an ideological litmus test, which I think is not responsible journalism.

STELTER:  Before we get into “Meet the Press” in particular, Jack, what do you make of the amount of coverage of climate change in general?

Because oftentimes I read on sites like yours and others complaints about the lack of climate change coverage in the press.

JACK MIRKINSON, “HUFFINGTON POST“:  Yes.  There is a lack of coverage in the press by and large, especially on television.  Media Matters just a few weeks ago did a big study looking at all of the broadcast news coverage of climate change.  They found that, on the Sunday shows in all of 2013, there was 27 minutes total combined on the big four shows on NBC, CBS, ABC and FOX, about climate change.

One show in particular, “Meet the Press,” did no coverage at all.

“Face the Nation” on CBS had the most.  The broadcast evening news shows covered it more probably because they do a lot more coverage of extreme weather events.

And so when you talk about extreme weather often you find yourself talking about climate change.  But by and large we’re talking about a huge issue that really undercovered on our major outlets.

STELTER:  So we would think, as we had last week, three of those Sunday shows covering the topic. You’d think that would be a good thing.

MIRKINSON:  Well, I really focused on “Meet the Press,” “Face the Nation” — and “This Week” also did coverage.  But theirs was better.  “Face the Nation’s” was especially good.

Even though the host, David Gregory, started out by saying that he didn’t want to have a debate, he still brought on someone who denied that climate change was happening in the first place.

MIRKINSON:  Right.  And you know, it makes a lot of sense that, if you don’t want to have a debate about the facts, you don’t bring on people whose primary focus in the segment is going to be to debate the facts about whether climate change exists or not.

MIRKINSON:  Well, I think these shows, they usually cover politics and they’re usually covering, you know, the clash between Democrats and Republicans.

MIRKINSON:  Right.  You know, but once you get out of certain issues, you know, you can talk about, well, should we raise taxes or should we lower taxes and that’s a real ideological battle that you can have.

But when, as you say, you’re talking about something that actually doesn’t have much debate around it, such as whether climate change is real, then I think these shows struggle to be so definitive about something and really break out of the paradigm that they set themselves up with a lot.

STELTER:  Dr. Kaku, what are the risks that are involved in false balance?

KAKU:  There are real consequences for agriculture, for our cities, for the economy.  I travel in Europe a lot —

STELTER:  You mean because people come away with confusion about the issue?

KAKU:  They don’t plan for the future.

In Europe it’s a settled question.  Global warming, climate change is a reality and they prepare for it.  If you’re in Amsterdam, the question is how do you prepare for the dikes and the levees.

If you’re in Venice, what happens if Venice goes underwater?  If you’re in Switzerland, what’s going to happen to the tourist industry?  They’re looking at concrete consequences.

This discussion is not taking place.  As a consequence, we’re not going to be prepared for the future.

STELTER:  You’re saying it’s not taking place at all.

And, Jack, you’re saying, when it does take place, in the case of “Meet the Press,” they go about it all wrong.

MIRKINSON:  Right.  You know, I think there is definitely a debate to be had about what to do about climate change and that’s an important debate.

STELTER:  Dr. Kaku, do you think there’s some room at the table for skeptics?

For example, if I was to write a story about this topic and quote nine scientists who believe it’s happening, should I be quoting at least one who is a skeptic?

Or is this so settled that there’s no room at all for something like that?

KAKU:  Well, scientifically speaking, it’s a settled question.  But the average person out there hears the skeptics and therefore some of their arguments have to be addressed because they’re out there anyway.

STELTER:  And language matters here so much.

Do you think the term global warming is one that reporters and anchors should avoid using because it conjures up the idea just of climate, the climate getting warmer as opposed to the idea of extremes?

KAKU:  That’s right.  Global warming is actually a misnomer.  It should be global extremes and global swings, because you add — as you add more energy into the atmosphere, it sloshes around.  Energy doesn’t simply uniformly warm up the planet.

And that means droughts in one area, enormous snowstorms in another area, 100-year floods here, 100-year forest fires there.  It’s becoming almost monotonous.  We have 100-year X every 10 years.

STELTER:  Do you find that journalists in general are the ones that interview, the ones that talk to you, do they have enough knowledge, enough background in order to explain this to their audiences?

Or are they lacking some of the scientific background they should have?

KAKU:  I think they’re lacking some of the background and they get intimidated.  Because the skeptics are not fools, they’re not stupid people.  They also read a lot but then they put it in in an ideological context and they see everything through this lens and they don’t do the homework.  They don’t do the computer programs. They don’t critique the mathematics.

And so for us there’s nothing to debate.  We cannot debate them, because they have no programs, no data, no formulas.  There’s nothing but ideology.

STELTER:  Michio Kaku, Jack Mirkinson, thank you so much for joining me.