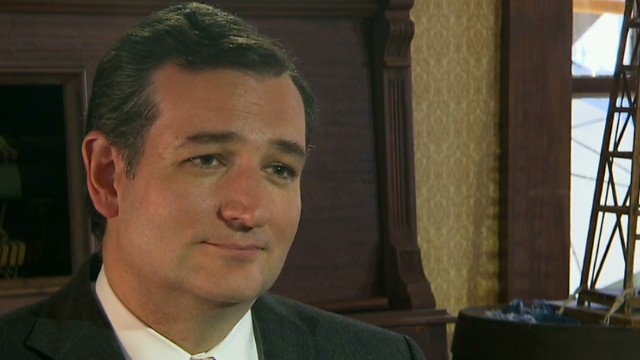 Sen. Cruz to CNN’s Dana Bash: as a human being, I can’t control what they say, how they behave. I can control what I do.

CNN chief congressional correspondent Dana Bash traveled to Texas to sit down with Senator Ted Cruz (R-TX) for an exclusive interview. The below highlights aired on New Day and more of Bash’s interview will continue to air across CNN’s programming today.

Highlight from Full Interview THIS IS A RUSH TRANSCRIPT. THIS COPY MAY NOT BE IN ITS FINAL FORM AND MAY BE UPDATED.

BASH:  OK.  Let’s talk about the debt ceiling and what happened in Washington.

I have to tell you, I did not think it was possible to hear your colleagues, your Republican colleagues, angrier at you then they were after the government shutdown.  But I actually think you’ve topped it, that they are really, really upset with you, that you tried to stop the debt ceiling with a filibuster, uh, and force your colleagues to take really, really tough votes that you knew would be tough for them.

CRUZ:  Well, you know, it’s interesting, I think last week, actually, is a perfect illustration of everything that’s wrong with Washington.  …

And what Republican leadership said is we want this to pass, but if every senator affirmatively consents to doing it on 51 votes, then we can all cast a vote no and we can go home to our constituents and say we opposed it.

And listen, that sort of show vote, that sort of trickery to the — to the constituents is why Congress has a 13 percent approval rating.

BASH:  — John Cornyn, who voted to try to stop your filibuster.

Uh, is he trying to fool Texas voters?

BASH:  Part — part of the eyebrow raising, um, criticism of this particular filibuster is that it wasn’t the kind of filibuster that you did over the shutdown.  You weren’t out there for 21 hours saying green eggs and ham, uh, reciting that.  In fact, you didn’t give a speech at all.

BASH:  I was watching you.  You were sort of in the corner, on the — on the floor at your seat and just watching the chaos quietly.

So I was wondering, it wasn’t even sort of a real filibuster.

BASH:  If you wanted to really block it, why didn’t you block it?

CRUZ:  What I said at the outset was I am not going to affirmatively consent to giving Harry Reid the authority to do this because it’s irresponsible, it’s a — it is selling our nation’s future down the road.

And, look, you know, you go back to those Senate lunches.  I — I won’t identify anything, but I’ll — I’ll tell you several people raised a question just like you did there — why are you trying to throw five Republicans under the bus and make them vote for raising the debt ceiling?

And I’ll tell you my response.  My response is I don’t want to throw any Republicans under the bus.  I would like to see all 45 Republicans stand together and actually do what we tell our constituents.

BASH:  But big picture, another editorial page — you cannot call this liberal, it’s “The Wall Street Journal,” called you “the minority maker.” Uh, and the idea there is that it — this is really what this is all about — what it’s all about, is that, uh, you force Republicans to take votes that could hurt them in their races and could put the Republican Party in the minority again.

Do you not want to be in the majority?

What’s more important to you, being in the majority or party purity?

CRUZ:  Dana, I want to win and turn this country around.  And the way we lose is not standing for anything.

BASH:  On a human level, I know that you’re in Washington fighting for the grassroots.

But you are a human being and you are sitting with people around you who, I would think that you have some respect for, they’re fellow senators in your own party.

CRUZ:  Oh, listen, you know, it — what I try to keep — keep an eye on is that I don’t work for the party bosses in Washington.  I work for 26 million Texans.

BASH:  Does it sting?

CRUZ:  — as a human being, I can’t control what they say, how they behave.  I can control what I do.  So every interaction that I have with every senator, Republican or Democrat, is consistently civil, courteous, respectful, treating them with — with the dignity that they deserve.