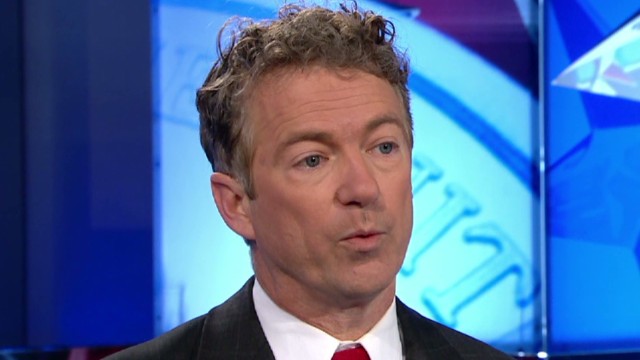 Sen. Rand Paul (R-KY) to CNN’s Wolf Blitzer regarding President Obama’s call to increase the minimum wage, “I have thought about is raising the minimum wage causes more unemployment.” A highlight from the interview is after the jump; please visit http://archives.cnn.com/TRANSCRIPTS/1401/28/se.02.html for a full program transcript.

Highlights from the Full Interview
THIS IS A RUSH TRANSCRIPT. THIS COPY MAY NOT BE IN ITS FINAL FORM AND MAY BE UPDATED.

BLITZER: He announced on increasing the minimum wage, the federal contractors would get an increase immediately to $10.10 an hour, which is not a huge amount of money by any means, but it’s a little bit more than the current minimum wage. Are you with him on that?

BLITZER: Do you believe in a minimum wage?

PAUL: Well, I think when you look at raising it, all of the studies show that if you raise it, you get more unemployment. So, really, the market place does a better job at determining what —

BLITZER: So, there shouldn’t be any federal minimum wage?

PAUL: I’m not sure I’m saying that. But I think what I am — I’m not sure I have an answer as far as whether there is a right or wrong —

BLITZER: You’re a United States senator. You thought about whether or not there should be a federal —

PAUL: Not necessarily. But what I have thought about is raising the minimum wage causes more unemployment. When we have 20 million people out of work, I think it’s a bad idea to raise it.

And the good way to look at this is, see, he looks at it from an emotional point of view. He says, well, more money is good. Well, yes, why not make it $15 an hour? Because people acknowledge that there is some price at which it does cause unemployment. Why not make it $50, or $100 an hour?

BLITZER: He outlined a whole series, he said if you’re not going to work with him, Republicans, he’s going to take executive action in a dozen areas and do it alone by himself. You have a problem with that?

The other thing is, is the one part of our country that is thriving, that is creating jobs, probably the biggest industry that’s creating jobs, he did mention, oil and gas. But the problem is, what he didn’t mention — I’m going to raise taxes on oil and gas — exactly the wrong thing you don’t want to do on the one industry in our country that’s really doing pretty well.