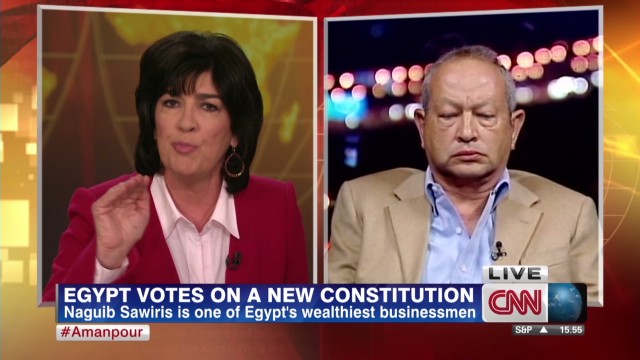 CNN’s Christiane Amanpour on Tuesday confronted Egyptian businessman Naguib Sawiris over the jailing of three al Jazeera journalists in that country.  Sawiris – one of Egypt’s wealthiest citizens, founder of the Free Egyptians Party and former chairman of the telecom giant Orascom – provided financial support for the opposition to former President Mohamed Morsy.

Peter Greste, Mohamed Fadel Fahmy and Baher Mohamed from Al Jazeera English were arrested by Egyptian authorities on December 29 and have been held since.  Egyptian authorities say the journalists held illegal meetings with the Muslim Brotherhood, which was declared a terrorist group last month.

“Three of my colleagues are in jail for doing their job, as you know well,” Amanpour said.

“These are allegations that they’ve obviously denied, and we deny it on behalf of our colleagues as well,” Amanpour said.