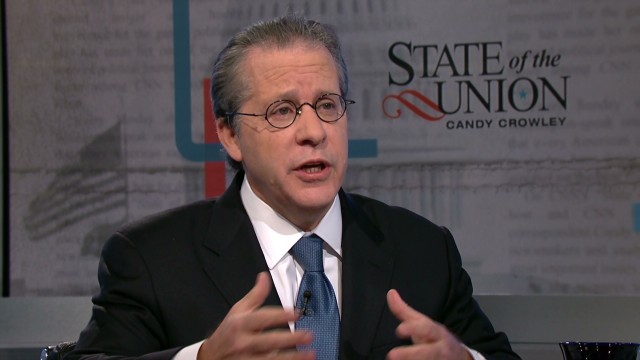 On CNN’s State of the Union with Candy Crowley, Gene Sperling, Director of the National Economic Council and Assistant to the President for Economic Policy, spoke to Crowley about unemployment insurance, Obamacare, and the economy.

CROWLEY: Your health care, your job, your money, what to expect from 2014? A conversation with Gene Sperling, director of the National Economic Council.

Then, is he the one?

UNIDENTIFIED MALE: The answers aren’t going to come from Washington. Republican governors are going to drive America’s come back.

CROWLEY: He took on public unions and became the only governor in history to survive a recall election. Wisconsin’s Scott Walker is the first in our series on the Republican Party’s search for itself.

Plus, same-sex marriage and faith versus Obamacare back at the Supreme Court. An explainer with court watcher, Joan Biskupic. And ready set, go, our panel ponders the deciding issues in politics this year 302 days until the midterms.

This is STATE OF THE UNION.

The White House and the Democratic allies on Capitol Hill have lost a full-court press for an extension of long-term unemployment benefits which expired last month. The Senate takes up the measure tomorrow. The bill provides relief to the jobless for up to 73 weeks. It’s not certain to pass, but Democrats are certain the politics of the issue favor their party this election year.

Joining me is the man leading the push to restore the emergency aid, a key economic adviser to the president, Gene Sperling. Gene, thanks for being here.

SPERLING: Thanks for having us.

CROWLEY: Let me — let’s start out with unemployment benefits. Some Republicans say, hey, we’re open to this, but it needs to be paid for. Others say it just encourages people to stay on unemployment till their benefits run out and then they go look for a job. And others say, wait a second, the economy is improving. This was emergency aid for the height of the recession and we don’t need it anymore. So, why do you think we have to have it?

SPERLING: You know, it is true that the economy is improving, showing more momentum. Unemployment rate, in general, is falling. But what we’re finding is that the worst legacy of the great recession is that there is a crisis of long-term unemployment, people who have been unemployed for six months or longer are finding it most difficult and we have to be a country that’s committed to leaving nobody behind in this recovery.

And so, that requires a full-court press. It does require more bipartisan effort to create jobs. It requires the president’s partnership. He’s working on with CEOs to give more of those long-term unemployed a chance to get interviewed and hired.

For a lot of people, that keeps them encourages them to keep looking when they’re getting discouraged. And I have to point out that tomorrow is actually the day that 1.3 million Americans will go to their mailbox and find that check missing, that check that they rely on to put food on their table —

CROWLEY: A lot of people say, wow, 73 months. That’s close to a year and a half that you can get in some people, not everybody gets that much, long term or not. When do you say, oh, OK, it’s good now?

SPERLING: No. I think one thing people should clearly understand is, first, as I said, you have to be actively looking for a job to get this.

CROWLEY: That’s paperwork, Gene. You know that’s paperwork. There are plenty of people that are on long-term unemployment that, you know, can game the system. So, most of them do not and we understand that.

SPERLING: Most of the people are desperately looking for jobs.

SPERLING: You know, our economy still has three people looking for every job. You know, we saw thousands of people looking for just a few hundred jobs here in Detroit when Wal-Mart put up ads. And I think if you look at why is there a bipartisan proposal now, why did Senator Heller, a conservative Republican from Nevada, support this?

CROWLEY: Because unemployment is really high in Nevada.

SPERLING: Yes. And he’s out there talking to constituents who desperately want to work. But let me answer your question, because it’s important one. People need to understand that emergency unemployment naturally tapers off. In other words, as your state goes below nine percent, those weeks go down.

As your state goes below seven percent, it goes down. And my hope would be is that we’ll start getting near the more normal levels of unemployment where we can cut this off. But, I do want to stress —

SPERLING: I think that we — I think what we know now is that, again, we have never cut off long-term unemployment — emergency unemployment benefits for long-term when unemployment has been this high. And you know, this is going to affect a lot of people, Candy. Over the course of this year, 14 million Americans would be affected, 4.9 million who get — would get unemployment benefits cut off in 2014 and then nine million people that they support.

So, yes, I do think we, as a country, are going to have to take a lot of steps to deal with long-term unemployment. That is the worst legacy of the great recession. And yes, there’s going to come a time where we’re going to not need have emergency unemployment benefits, but we’re going to have to do more. The president has challenged CEOs to work with him on making sure that the long-term unemployed are getting a fair chance to interview and hire.

And we’re going to need to do things on job creation. We need to — the presidents proposed a grand bargain for job growth. He said, let’s put together lowering corporate tax — tax rates, corporate tax — together with infrastructure. That’s the type of grand bargain on jobs that we will also have to do, because you’re right, in the end of the day, we’ve got to create the demand and the job growth out there that gives these people who are desperately looking for work now a job to get.

CROWLEY: The president has talked about this corporate tax reform coupled with some infrastructure/job creating kind of plans.

CROWLEY: The problem is that he has been unable to get it before. Now, his poll ratings are lower than they’ve ever been. What makes you think he can get it this year?

SPERLING: Well, look, we are building off some bipartisan cooperation in the budget agreement. And I think one of their — the real issues for 2014 is we have more momentum in the economy unquestionably in terms of growth, in terms of job creation. Are we going to build on that momentum? There is bipartisan possibilities to pass, immigration reform, housing finance, manufacturing.

And yes, this idea of a grand bargain on jobs is designed to bring people together, something that Republicans and business leaders tend to support, lowering corporate rates, eliminating loopholes, lowering them to 28 percent rates, 25 percent, simplifying the tax code for small businesses but combining it with infrastructure is a way to do things that most Americans —

CROWLEY: — have way this year? I mean, when he had better numbers, more public behind him, and a more sway in A Democratic Party that has to look toward a 2014 election? How can they get it done this year when he’s in a weaker position what he couldn’t get done last year, the year before?

SPERLING: Well, I think, you know, there’s no question, Washington’s been, you know, extremely dysfunctional. But I think you have to hope that there is desire everywhere to show people that we can work together and I think that it will be harmful, not just for the economy, but I think will be harmful politically if Republicans use 2014 as a year to threaten, default again on the debt limit or refuse to do bipartisan immigration reform that’s already passed the Senate.

CROWLEY: A couple of quick questions, one on the economy. Where is it headed? At the end of this year, will we be at six percent unemployment? What will the growth rate be? What do you look ahead to this year?

SPERLING: Well, there’s no question, we’ve seen more momentum. We expect the second half of 2013 to see growth that’s been over three percent.

SPERLING: No. I’m saying for the second half of this year, you see growth will be over three percent. That goes in with significant momentum into 2014. You know, I don’t want to do forecasts for 2014. I will say there’s some very positive signs. You’re seeing housing prices coming up. You’re seeing 401(k)s come up. That’s improving the balance sheets of average families across the country. You’re seeing a lot of strength in manufacturing. You’re seeing health care costs three years in a row now at the lowest rate of growth that we’ve seen on record.

SPERLING: These are all positive signs. The last thing I want to say is that we’re also seeing 50 percent of companies saying that they’re rethinking about bringing jobs back to the United States. A consultant firm just said that for the first time since 2001, the United States is the best place to do business. That’s because we’re doing more about our innovation. It’s about lower energy costs. It’s about lower health care costs and those were all promising signs.

But ultimately, Candy, it’s going to depend what do we do with that momentum? Do we work together in some of the ways that we talked about? Past minimum wage, increase minimum wage? Do immigration reform, housing finance reform, manufacturing? These are things that will make a big difference in how much momentum the economy will have in 2014.

CROWLEY: Gene Sperling, thank you for joining us this morning. Appreciate it.