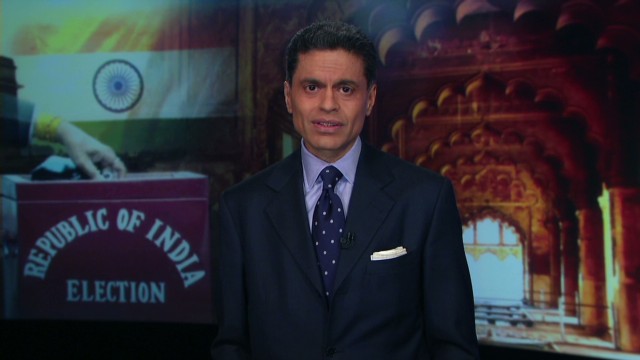 CNN’s and TIME’s Fareed Zakaria travels to and across India for an extraordinarily insightful look at the world’s largest democracy from the inside – its complexities, challenges, and achievements.  The one-hour in-depth special report, India at a Crossroads – A Fareed Zakaria GPS Special will debut Sunday, Dec. 29 at 10:00am and 1:00pm on CNN/U.S.  It will air on CNN International at 7:00am and 3:00pm.  All times Eastern.

While much of the world has experienced sluggish economic times in recent years, Zakaria reports India’s average economic growth (GDP) over the last decade has been robust – around seven percent.  And, Zakaria points out, in 2014, India will exercise the “largest democratic process in human history” as hundreds of millions of Indians, using 800,000 voting booths and 1.3 million voting machines, will engage in the world’s largest democratic action by voting in the national elections.

Yet, in addition to having democracy in common with America, India’s governance is also experiencing a crisis of political dysfunction – and on a grand scale.  Widespread corruption threatens some of its economic opportunity, and India’s social caste system and endemic disparities faced by women threaten to incite a home-grown Indian version of an ‘Arab Spring’.

More information about why India – and the success of India – is essential for the world may be found at www.cnn.com/gps.   During the special broadcast, producers of the special will engage with viewers using the hashtag “#CrossroadsIndia” via Twitter.