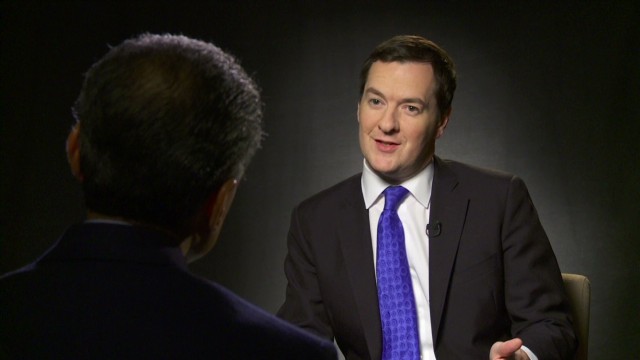 On Fareed Zakaria GPS, George Osborne talks success of austerity in the U.K.

Osborne on Chinese Investment in the U.K.

FAREED ZAKARIA, HOST: On Wednesday, the United States Federal Reserve announced that it was beginning “the taper” – that’s the process by which it will end the extraordinary efforts put in place after the financial crisis to keep the U.S. economy from collapsing.

The Fed has bought up trillions of dollars of U.S. government bonds – to keep interest rates low and to stimulate the economy. And the Obama administration pushed a large stimulus program to jump start the stalled economy.

Our “special allies” across the pond in the United Kingdom have taken essentially the OPPOSITE fiscal approach in the 5 years since the crisis – cutting down on government spending.  George Osborne was the master of that austerity plan.  He’s the Chancellor of the Exchequer – Britain’s grand title for finance minister.

He joined me here in New York.

ZAKARIA:  Thank you, George Osborne, for joining us.

Let me ask you to begin with, um, you’ve been touting Britain’s growth.  You’ve written an op-ed in “The Wall Street Journal.”

But of course, there are a lot of people who say Britain’s recovery has been very weak, uh, the weakest in the G-7 other than Italy. And there is a specific charge made, which is that it was your austerity program, especially the spending cuts, that was responsible for this very weak recovery.

Let me read to you something Larry Summers said on British television. He said, “Britain’s economic policies” — meaning yours — “are a powerful empirical test of the efficacy of determined, resolute austerity and the results so far have not been encouraging to advocates of that strategy.  They’re in line with predictions that this austerity would lead to reductions in demand, reductions in GDP, etc.”

GEORGE OSBORNE, CHANCELLOR OF THE EXCHEQUER:  Well, I totally reject his analysis.  I’ve – look, if you look at the situation the U.K. found itself in three and a half years ago, we had had one of the deepest recessions of any of the major economies in the world.  Our GDP had shrunk by over 7 percent to GDP.  We had the largest banking crisis of any financial center, the biggest bank bailout.

And we exited with a very high budget deficit, an 11 percent budget deficit.  Really, only the United States had a similar sized deficit.  And, of course, the U.S. has a reserve currency.

That was the situation we were confronting.  And we set out a deliberate plan to bring that deficit down, reduce the structural deficit, to sort outcome of the structural problems in our financial system and to rebalance the British economy.

Now, I think three and a half years on, the British economy is currently growing faster than pretty much any other Western economy.  Jobs are being created at a rapid rate each month.  And you can see a rebalancing happening.

ZAKARIA:  One of the points Summers makes, though, is that the path to deficit reduction ultimately lies in stronger growth.  You pointed out Britain and the United States had roughly comparable budget deficits when the cri — soon after the crisis.

And above all, we have a consistent plan.  People have been able to look at us and know what we’re going to do this year and what we’re going to do next year, what we did last year.  And we’ve been able to provide stability and confidence and predictability uh, for families and investors into the UK.  And as a result, I think people around the world are looking to the U.K. now and investing in the UK.  And job creation in the U.K. is running at around 60,000 a month, which in the U.S. context, would be around 300,000 jobs a month.

So, you know, that is strong, as well.

Explain what’s going on, because I think this is — this is quite different, or at least the United States has a stronger sense of, uh, being a little wary of — of those — that kind of foreign capital.

OSBORNE: Well, I start with this principle that a country like Britain has got to earn its way in the world and attract investment in the world and it’s going to succeed and increase the living standards of its population.

It’s got to have a government that lives within its means, but it also has got to be an attractive place to do business. And I see Chinese investment as an enormous potential source of wealth creation for the United Kingdom. And I want to see that Chinese money helping create British jobs and British infrastructure.

And, of course, we have national security checks and procedures, as we would do with investment from other countries.  Uh, but I — I see China as a great source of opportunity

ZAKARIA:  Let me ask you about something.  And you — you have to put your hat on here as David Cameron’s principle political adviser.  You’ve often been called arch – one of the architects of the conservative, uh, electoral strategy.

The prime minister and you, um, face a certain amount of opposition now from what we would call in the United States your base, that is, hard core conservatives, on issues like gay marriage, which David Cameron has been very strongly supportive of; also on Europe.

Uh, do you believe that you will be able to weather this — these challenges from the — the base of the Conservative Party?

OSBORNE:  I mean I’m — I’m a Conservative who believes in reducing people’s taxes, government living within its means, uh, a vested interest in education being overcome so kids are properly taught, welfare being reformed.  You know, I — I tick all those conservative boxes.

But I also think successful conservative parties have to be in touch with the modern world.  They have to reflect the world around them if they want to represent that world in government.  And on an issue like gay marriage, I was a supporter of that.  And it’s a Conservative-led government in Britain that has made that law. And that’s something I am proud of.

Uh, and I think on many of these social issues, which are not as, you know, they’re not as hotly contested as they are in the U.S. political debate.  So you have to aim off a bit and accept it’s a different context.

So we’ve got a proud tradition that we can tap into, to a progressive tradition, if you like.  And I don’t think we should leave that space to the left.

ZAKARIA:  George Osborne, a pleasure to have you on. Come back often.