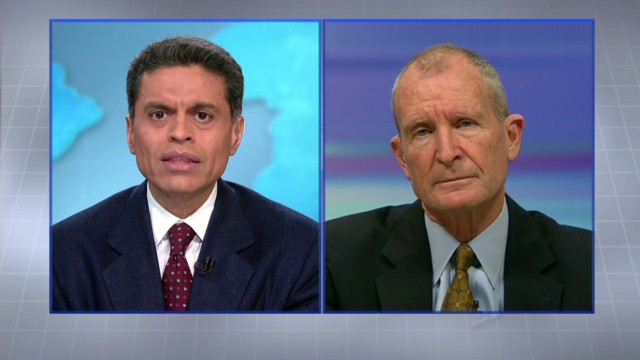 Dennis Blair on anger towards NSA

CNN’s FAREED ZAKARIA GPS features an interview with Dennis Blair, former Commander-in-Chief of the Pacific Command, who spoke with Fareed Zakaria about if the NSA needs reform.

A transcript of this interview is available after the jump.

FAREED ZAKARIA, HOST:  This week, a federal judge ruled that the NSA’s program that vacuums up data about all American phone calls is likely unconstitutional.  And a presidential advisory panel on the matter urged President Obama this week to stop the practice and put in place major reforms on intelligence gathering.

I wanted to put all that to President Obama’s first director of National Intelligence, now retired, Naval Admiral Dennis Blair.
Admiral, what do you make of this court ruling?
I know you’re not a judge, but my point, my question would be, if that ruling is upheld,
does it cripple the NSA’s ability to collect this kind of data?
How — how big a blow would that be?
DENNIS BLAIR, FORMER DIRECTOR, NATIONAL INTELLIGENCE:  I think the larger question here that the — the issue that ought to be discussed is this balance between privacy, on the one hand, and protection on the — on the other hand.
It really is a trade-off.  When you’re in — in the insides of the intelligence business, you’re really driven by trying to find out who are the — who are the bad people out there who are trying — who are making plans and intending to kill a lot of Americans, a lot of innocent Americans.  And you’re really driven to do everything you can, within constitutional limits, to try to identify them and — and stop them.
And we’ve done an extremely good job so far, I would say, over the last 11 years, 12 years, since 9/11 The question is –
ZAKARIA:  — but the panel is saying that you’ve drawn –
BLAIR:  -Do we want to go any further?
ZAKARIA:  — yes, but the panel is saying that you’ve drawn the wrong balance or you’ve — you know, the balance between security and liberty has been badly drawn, that there is not enough protection of individual liberties, not enough checks and balances in place.
And a lot of what they’re arguing for is not that you can’t do these things, but that, for example, the FISA court needs to be…have more procedures in it, there need to be judges appointed by people other than the Chief Justice of the Supreme Court there needs to be a public advocate.
What’s wrong with putting in all those kinds of checks and balances?
BLAIR:  I don’t — I don’t see anything wrong with putting in additional checks and balances on the FISA court along the lines that have been suggested.
But you know, Fareed, the main thing that I looked for in the program was whether actual harm was done to an innocent American by the — by the program.
Has anybody lost a job, been harassed by the FBI, been barred from doing something as a result of the program, any innocent American?  And the answer is no.  None of those have come to light.  All the concern is about the possibility of misuse of this information by the National Security Agency and the intelligence community.
My experience is that information is not misused and that having it available to efficiently check to see whether a foreigner who has been identified as a potential terrorist, has called an American phone number, is a useful check and, in fact, has helped us thwart some attacks.
ZAKARIA:  Senator Wyden says that it’s pretty clear now that the phone logging program that the NSA uses, this big data mining program, did not, in fact, stop any terrorist attacks, that they — that the committees — the advisory panels’ report makes that clear.
Your reaction?
BLAIR:  I think that’s incorrect.  I would cite the Najibullah Zazi plan to set off a number of bombs in the New York City subways in 2009 on the pattern of the 2005 London attacks, and I know that the information gathered by NSA under this program was a key factor in tipping us off as to what Zazi was up to.
And he was subsequently stopped before he could do it.  So I just think that’s incorrect.Intelligence is a lot of different indicators put together when done well to find what’s going on.  And this program has contributed to that.  And I believe it’s constitutional.  So I believe it should continue.
ZAKARIA:  Do you understand the kind of anger, though, that this has generated around the world and in the United States, because there’s a sense that the NSA — and it is really about the NSA — has this technological capacity to look into almost anything, anyone’s phone calls, anyone’s emails.
And the — and the — and the response of the intelligence community seems to be, well, trust us.  We’re not going to do anything really silly with this.
BLAIR:  I do believe and I tried when I was Director of National Intelligence to talk more openly about this program.  I think we can do that without talking about specific details, which are what have to be kept secret.
And I think that this administration has done a bad job of explaining it.  And had we done it from an early stage, from the time that I was DNI on, then these revelations would have been less shocking.
I think a couple of things are worth mentioning, though.  The scale of these programs is large because the scale of communications is large.  And there are billions of phone calls, emails, twits and other forms of communication being made all over the world.
So in order to try to find ones that are being made by those hostile to the United States, it will require big programs, large computers, lots of data.  So that simply is a — is a question of scale, not a question of principle.
ZAKARIA:  Admiral Dennis Blair, pleasure to have you on.
BLAIR:  Nice to talk with you, Fareed.
ZAKARIA:  Up next, why a group of American professors have decided to boycott Israel’s academic institutions.  I have a response from one of Israel’s top thinkers.
Tags
CNN