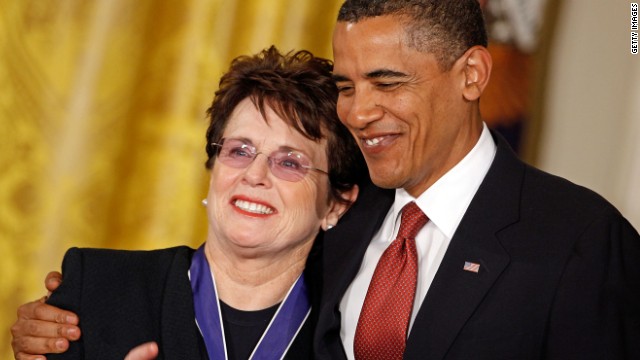 Amanpour exclusive: Billie Jean King to gay Russians: ‘You are not alone’

In an exclusive interview, tennis legend Billie Jean King told CNN’s Christiane Amanpour she “thrilled” to represent the United States at the 2014 Winter Olympics in Sochi.  “I’m very proud to go as an athlete, and as a gay woman,” she said. “I’m thrilled.”

Asked by Amanpour if there will be any protests, King said “Maybe we should wave rainbow flags or something, I don’t know,” she said, drawing an analogy to the Black Power salute – a raised fist – given by two American athletes at the 1968 Mexico City Olympics. She added “As long as we’re not being malicious, we can show our feelings.”

President Obama named the former tennis champion, who is gay, to the American delegation at the Olympics earlier this week.  The President himself will not attend the Games – the first time in more than a decade that an American president has not done so.

King said if the anti-gay law was the reason for the President’s non-attendance he should “go ahead and say it,” but added – with tongue in cheek – that he was “sending a ‘King’ instead of a president.”

Russian President Vladimir Putin, in a press conference Thursday, knocked down criticism over the law as “Western values.”