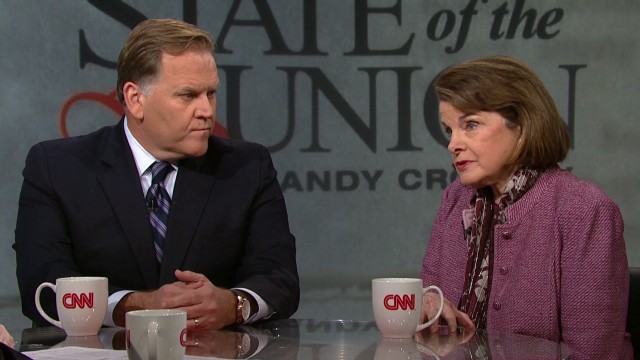 Feinstein: ‘Terror is up worldwide’

Transcript and video available after the jump.

‘Taliban is in a position to come back”

Syria a ‘lightning rod’ for jihadists

CROWLEY: I recently spoke with the chairman of the Senate and House Intelligence Committees, Dianne Feinstein and Mike Rodgers.

CROWLEY: The big question that’s always asked, are we safer now than we were a year ago, two years ago? In general?

FEINSTEIN: I don’t think so. I think terror is up worldwide, the statistics indicate that, the fatalities are way up. The numbers are way up. There are new bombs, very big bombs, trucks being reinforced for those bombs. There are bombs that go through magnatometers. The bomb maker is still alive. There are more groups that ever and there’s huge malevolence out there.

CROWLEY: So congressman, I have to say, that is not the answer I expected. I expected to hear, oh, we’re safer. Do you agree?

ROGERS: Oh, I absolutely agree that we’re not safer today for the same very reasons.

So the pressure on our intelligence services to get it right to prevent an attack are enormous. And it’s getting more difficult because we see the al Qaeda as we knew it before is metastasizing to something different, more affiliates than we’ve ever had before, meaning more groups that operated independently of al Qaeda have now joined al Qaeda around the world, all of them have at least some aspiration to commit an act of violence in the United States or against western targets all around the world.

They’ve now switched to this notion that maybe smaller events are okay. So if you have more smaller events than bigger events, they think that might still lead to their objectives and their goals. That makes it exponentially harder for our intelligence services to stop an event like that.

CROWLEY: Because essentially one person can do a small event.

CROWLEY: So, one of the things that the senator said was that there is more hatred out there, more — and why is that?

FEINSTEIN: I think there is a real displaced aggression in this very fundamentalist, jihadist, Islamic community. And that is that the west is responsible for everything that goes wrong, and that the only thing that’s going to solve this is Islamic Sharia law and the concept of the caliphate.

And I see more groups, more fundamentalists, more jihadists more determined to kill to get to where they want to get. So, it’s not an isolated phenomenon. You see these groups spread a web of connections. And this includes North Africa, it includes the Middle East, it includes other areas as well.

CROWLEY: Lots of times we look at kind of some of these splinter groups going, yeah, but their interest is local.

ROGERS: And here’s the — but here’s the concern of that. Now, remember, you have somewhere near 25 states that have some failed level of governance, meaning they can’t secure large spaces of their own country. Those are always attractive for safe havens when it comes to any terrorist organization. And we’re finding they’re taking advantage of that.

So you see what’s happening in a place like Syria where you have a pooling of al Qaeda members and affiliates of al Qaeda in a way we’ve never seen before at the level of numbers that we have never seen before, and here’s the scary part of this, some thousands of people showing up to participate in that in their mind jihadist effort are westerners, meaning they have western passports.

A percentage of them have already gone home, including the United States, by the way, is included in that western number. We are very, very concerned that these folks who have western paper have gone there, participated in combat events, are trained, are further radicalized, now have the ability to go back in western countries.

We know that those–

CROWLEY: And to ply that trade.

ROGERS: Well, to ply that trade. And now they have a connection, a direct connection to al Qaeda affiliates operating in a place where most people would say, well, we have no interest in Syria. Well, clearly we do. And clearly, that’s just one place. And it’s starting to spread.

You saw what happened in Lebanon recently.

ROGERS: Where they blew up the Iranian embassy.

This is all starting to spread. Iraq is having its problems now. It’s spreading into Lebanon, Jordan has issues, Turkey along the border has issues. This is very, very, very concerning.

FEINSTEIN: There is now a bomb that can go through magnatometers. People can get on aircraft with those bombs. They have tried to send four into this country, two in printer cartridges, one by Abdulmutalleb, and one, asset, was able to obtain out of Yemen.

These were coming into this country, two of them aimed at synagogues in Illinois.

Now, having said that, the only way to stop this was with intelligence. The only way you could stop that is putting clues together to ferret out where this was coming from.

CROWLEY: So where is our weakest point?

ROGERS: Well, I mean, I think — the threat level has never been more diverse than it is today. And that’s one of the bigger, I think, concerns that we have. And I think why both — we both would agree that the threat is higher today and we are probably less safe is the more efforts they try, the more perfect you have to be in order to stop something. And that’s a huge challenge.

And so, you think about what’s happened with recent disclosures. We have now three al Qaeda affiliate groups have changed the way they communicate means it’s less likely that we’re going to be able to detect something prior to an event that goes operational, meaning that they’ve already started the final planning stages to blow something up or shoot someone.

And so we’re fighting amongst ourselves here in this country about the role of our intelligence community that is having an impact on our ability to stop what is a growing number of threats.

CROWLEY: So it seems to me what both of you are saying you haven’t liked this focus on the NSA and the complaints about the NSA in terms of the breadth of what they’re collecting. ROGERS: Well, I would argue it allows them to focus on the problem. We spend a lot of time now internally focused, their up — I can’t tell you the thousands of man hours they have spent trying to prepare people to understand fact from fiction, what is happening versus what is not happening.

And we both — both of our committees take great pride in our real oversight function of which we participate in to make sure they’re not violating the law.

Well, we’ve had to recreate all of that work over and over and over again every time there’s a disclosure. And our fear is, every time we do that, we take them away from their focus, which is what is al Qaeda’s next event? Who is moving somewhere in the world is trying to get into the United States or an allied country to kill somebody. And that part seems to have gotten lost in the fact that we have new threats.

CROWLEY: When we return, the fine line between maintaining security in a critical part of the world and negotiating with its leader.

FEINSTEIN: So much the victim of what thought occurs to them right at the moments based on some anger that he feels about something that may not even be related.

CROWLEY: Find out who Senator Dianne Feinstein is talking about next.