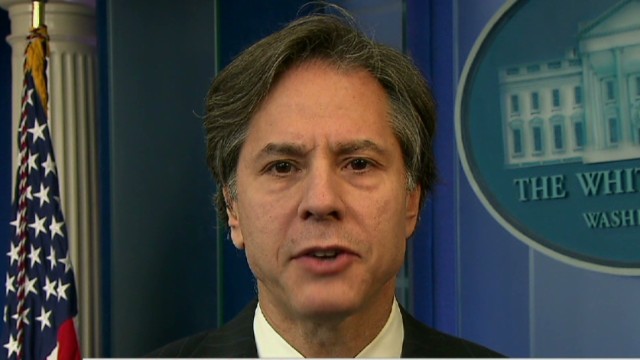 President Obama’s Deputy National Security Advisor Tony Blinken told CNN Anchor Chris Cuomo that the Iran nuclear deal is the first step in stopping the advancement of its program. Blinken stressed that pressure on Iran “is not going away” and addressed why he thinks Israel and other nations may have a problem with the deal.

Blinken said, “In terms of Israel, we understand Israel has the right to be skeptical. An Iranian bomb would present an existential threat to Israel. And we have the exactly the same goal, which is to prevent Iran from getting a bomb. There may be tactical differences in how we get there. I think Israel would’ve preferred not to do this first step. If we could’ve negotiated a comprehensive deal right away in a matter of days, we would’ve done that. But because its complicated, because it takes time, we wanted to make sure that Iran couldn’t use that time to advance its program. This stops the program in its tracks. Rolls it back, gives us time to see if we can negotiate a comprehensive deal.”

“… Some of our Arab friends, for example, are concerned that if we get a deal with Iran on its nuclear program, a comprehensive deal, then we’ll be satisfied and we’ll forget about all of the other things Iran does that they don’t like and that we don’t like,” Blinken said. “And the fact is we won’t. We’ll continue to confront what Iran is doing around the world that is a problem for us and a problem for some of our partners. But that’s their concern; we’ve reassured them that’s not the case.”