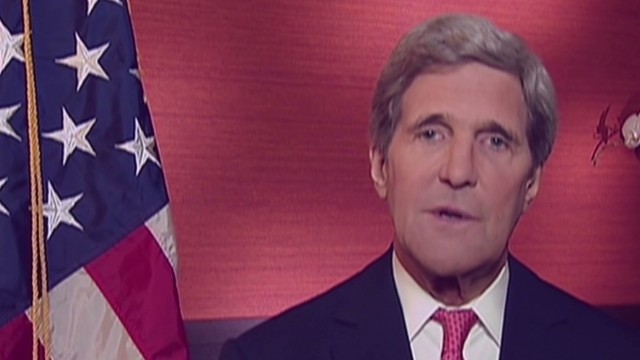 Sec. of State John Kerry on CNN’s State of the Union with Candy Crowley

Secretary of State John Kerry speaks with Candy Crowley on CNN’s State of the Union about a deal struck between the U.S., Germany, China, France,Russian Federation, the United Kingdom (P+5) and Iran over Tehran’s nuclear program early this Sunday morning. The deal negotiates some sanctions in order to slow the country’s nuclear development program. Tune in to State of the Union with Candy Crowley on Sunday at 12pm ET to see the full interview.

Transcript and video available after the jump.

CROWLEY:  Mr. Secretary, thank you for joining us.  As my first question, a lot of people say Iran is just going to be North Korea.  A country that agrees to stop its nuclear ambitions in order to get sanctions lifted and then secretly goes ahead and continues with its program.  Why do you think Iran is not North Korea?

And in addition to that, they have publicly committed that they are not going to build a nuclear weapon.  North Korea already has and has tested and will not declare a policy of denuclearization.  So, there are many different things that lead one to at least say that we ought to be exploring and testing the possibility of a diplomatic solution.

Let me be clear, we do that with eyes absolutely wide open.  We have no illusions.  You don’t do this on the basis of somebody’s statements to you.  You do it on the basis of actions that can be verified, and moreover, we have kept the basic architecture of the sanctions is staying in place.  There is very little relief.  And we are convinced that over the next few months, we will really be able to put to the test what Iran’s intentions are.

CROWLEY:  So you, at this point, trust Hassan Rouhani, the new president in Iran to be able to follow-through.  Are you convinced that he has the power to do so?  Because you know that the hard-liners in Iran certainly are singing a different tune than has been sung at the negotiating table.

KERRY:  Absolutely.  We’re well aware of that.  And the simple answer to you is, none of this is based on trust.  It’s not a question of trust.  It’s a question of having the verification and the intrusive inspections and the insights into the program and the commitments that can be held accountable so that you are, in fact, creating a fail-safe mechanism by which you are making your judgments.

None of this — when you’re dealing with nuclear weapons, it’s not an issue of trust.  As the old saying goes, if Gorbachev and Reagan, you know, trust but verify.  Verification is the key.  President Obama and I have said since the beginning, we’re not just going to verify or trust and verify, we’re going to verify and verify and verify.  We have to know to a certainty so that Israel, Gulf States, ourselves, nobody can be deceived by what is taking place.

CROWLEY:  One of the points that the Israelis and others who have been unhappy about these negotiations have made is that there’s a difference between halting a march toward nuclear capability and actually dismantling the mechanisms you need to build nuclear bombs.  Here, you have halted it but not dismantled it.

CROWLEY:  What do you say this morning to the Saudis, to the Israelis who will say that they feel less safe, that Israel, in fact, is threatened?

KERRY:  Well, Israel is threatened by what has been going on in Iran.  But I believe that from this day for the next six months, Israel is, in fact, safer than it was yesterday because we now have a mechanism by which we are going to expand the amount of time in which they can break out rather than narrow it.  We’re going to have insights to their program that we didn’t have before.

So, I believe that Israel, in fact, will be safer, providing we make sure that these sanctions don’t get lifted in a way that reduces the pressure on Iran and we don’t believe they will be.  There’s very little sanctions relief here.  And the basic architecture in the sanctions stays in place.

So, we believe very strongly that because the Iranian nuclear program is actually set backwards and is actually locked into place in critical places that that is better for Israel than if you were just continuing to go down the road and they rush towards a nuclear weapon.

CROWLEY:  Mr. Secretary, what is next vis-a-vis the relationship between the U.S. and Iran?  Do you see normalizing relations down the road?  What is possible in that one-on-one relationship?

KERRY:  Well, nothing is possible until we solve the nuclear problem.  And we’re not looking — the only down the road is over the course of the next six months while we work to try to solve the nuclear program.  And if it can be solved, hopefully, establish a basis for proceeding forward on other things.

But right now, we’ve made it very clear that the international community requires resolution of the United Nations resolutions that have been passed, the questions that the International Atomic Energy Agency has.  All of these things need to be answered.  And so, we’re trying to set up a process by which we can verify, know what we’re doing, restraining the program while we negotiate the comprehensive deal.

CROWLEY:  And finally, Mr. Secretary, Iran’s behavior has been a bad actor in the region and elsewhere, not just because of its pursuit of a nuclear weapon, but because of its relationships there, how it backs Assad, a man that the U.S. administration and many other countries don’t think should be there.  So, there are other things that certainly speaks to Iran’s behavior.

Do those things have to change?  And do you think that’s a part of this process in order for you to feel that there is a way to have somewhat normal relationship?

KERRY:  Well, obviously, over the longer term and for any opportunity to really change the relationship, of course those things have to change.  Hezbollah is a terrorist organization.  Fundamentally, a client of Iran.  Hezbollah is in Syria.  Iran is engaged in Syria.  These are issues of deep concern to all of us.  In addition to that, we’ve seen activities around the world sponsored by Iran on occasion that violate the norms of international standards and behavior.

So, there are lots of things regrettably that we still have to work on.  Our hope is that President Rouhani and Foreign Minister Zarif want to build this different relationship, want to show in clear ways as we go forward that the program is peaceful.  And we are open.

What President Obama has said is we are open not to being duped, to not to being tricked, and not to being led down the primrose path but open to setting up a verifiable, clear process by which everybody, Israel, our friends in the region, we particularly, the international community, our allies, the P5+1, can all make clear determinations about what Iran is doing in terms of its nuclear program and that it is going to live up to the highest international standards.

That’s the beginning of the way in which you change the relationship.  And that is where we’ve all decided, Iran included, that they’re prepared to try to make steps in order to change this relationship.

CROWLEY:  Secretary of state, John Kerry, thank you for your time.  I know it’s been a long day, so we appreciate it.