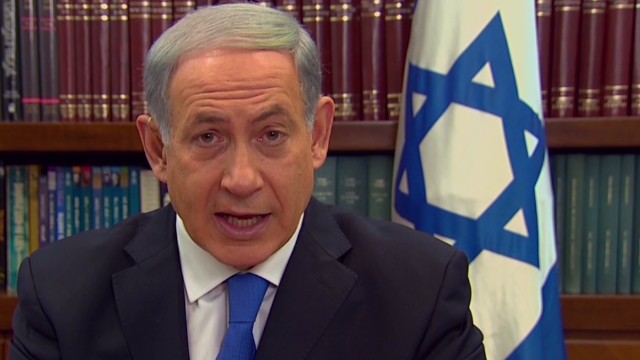 Netanyahu on Iran: ‘This is a bad deal’

Video and transcript of the interview are available after the jump.

Netanyahu on Iran: Increase the pressure

Netanyahu: ‘the survival of my country’

Netanyahu: Defend against any threat

Netanyahu: Iran is not a partisan issue

Mr. Prime Minister, thanks for being here.  As you know, the five permanent members of the U.N. Security Council, along with Germany, will this week sit down with their counterparts from Iran to once again work on a deal to, hopefully, freeze Iran’s nuclear ambitions for a period of time.

My question to you, because I know you are very skeptical of this and have not liked what you’ve heard so far, would you — is there any interim deal that you would — you would think was all right?

CROWLEY:  It’s also, at this point, not a done deal.  And I want to play you something that the president said this week about pursuing a deal with Iran.

BARACK OBAMA, PRESIDENT OF THE UNITED STATES:  We will have lost nothing if, at the end of the day, it turns out that they are not prepared to provide the international community the hard proof and assurances necessary for us to know that they’re not pursuing a nuclear weapon.

CROWLEY:  So if there is a deal that provides the kind of assurances the president is talking about, to show that Iran is not pursuing, perhaps not even getting rid of what they have now but not pursuing any further a nuclear ambition, isn’t that a good place to start?

NETANYAHU:  Well, I respect the president, and I know that we have a common goal to prevent Iran from developing nuclear weapons and, in our case, from developing the capacity to make nuclear weapons.  In fact, they’re not giving up any of their capacity.  They have 18,000 centrifuges to enrich uranium to make the — the core of a bomb.  They’re not giving up even one centrifuge, Candy.  Not one.  So they’re keeping their capacity.

Now, here’s what could happen and might very well happen, if the — their billions of dollars of sanctions easement, which is what is proposed by the P5+1.  You’re going to get investors, companies and countries scrambling one after the other to try to get deals with Iran, because economies and prices work on future expectations.

If you took all that pressure all these years to build up the sanctions regime, and it’s finally working, it’s finally getting there, and Iran is really on the rope; their economy — on the ropes.  Their economy is close to paralysis.  And all of a sudden, you take off the pressure, everybody will understand that you’re heading south.  You’re going to really be in danger of crumbling the sanctions regime.

NETANYAHU:  So while I appreciate the intention of trying to build it back up, I think it’s going to be exceedingly tough, if not impossible.  I think a lot is being offered by the P5+1 for Iran.  It’s getting just an enormous deal, from their point of view, and it’s giving practically nothing in return.  They’re keeping their infrastructure to make nuclear bombs.
but I think also to the signaling inside Iran that it’s over, and signaling outside Iran to many countries that will start scrambling to — for contracts in Iran.  And it’s going to be very hard to keep the sanctions regime.

CROWLEY:  I do want to talk to you about increasing sanctions.  As you know, in the U.S. Congress, there’s a move toward that.  But let me just button this up by playing something that the president said, which goes precisely to the point of those sanctions that you fear can never — that would open up sort of a floodgate of people wanting to do business with Iran.  Here’s what he said.

OBAMA:  If it turns out six months from now they’re not serious, we can crank — we can dial those sanctions right back up.

CROWLEY:  What about that?

NETANYAHU:  Well, I — well, I responded to that, Candy, and I think — I think that in — in practice, that may be the president’s desire and intention.  I have no doubt about that.

But my assessment, given what I see now, I only see the — the countries and the investors and the companies scrambling to get to Iran.  I already hear that — those voices.  I received that information.  Everybody’s getting ready to the starting line, to rush to Iran to give — to be in part of that deal.

I think on — but if you went the other way, and you not only preserved the sanctions instead of reducing them, but you actually increased them, then you know, all these countries, all these companies will have to choose between the Iranian economy and the U.S. economy.  Because that’s what additional sanctions mean.  It means choose Iran or the U.S.  That’s a no-brainer.  Everybody will choose the U.S., siding up with the increased sanctions.  Everybody has up to now.

And if you continue the pressure now, you can get Iran to cease and desist.  You see, the options aren’t really a bad deal — and this is a bad deal — or there’s a third option.  Sanctions.  Increase the sanctions.  And in fact, if you do a bad deal, you may get to the point where your only option is a military option.  So bad deal actually can lead you to exactly the place you don’t want to be.

I think, if you want a peaceful solution, as I do, then the right thing to do is ratchet up the sanctions.

CROWLEY: .  The president, Secretary of State Kerry — in particular, Secretary of State Kerry has been up on Capitol Hill, saying, “This is a bad idea, because all you do is play into the hands of the hardliners who don’t want the new president of Iran to make any kind of deal with us.  It will be bad faith.  It will certainly make these negotiations go ahead and send Iran back into the corner to build nuclear weaponry.”

I want to read you something that Senator Mark Kirk — he’s from Illinois.  He’s a Republican.  He was in on one of those behind-closed-doors meetings, and he came out and had this to say about Secretary of State John Kerry’s briefing.  “The administration, very disappointingly, said discount what the Israelis say.”  This might speak to a larger problem, I think, that you and this administration are on totally different sides, and really that — that friction has now gone to Capitol Hill.

And by the way, I don’t think this is a — from what I gather is not a partisan issue, either.  There are Democrats who are…

NETANYAHU:  … calling for tougher sanctions, and there are Republicans who are saying that — keep the sanctions as they are.

I’m speaking, not from a partisan issue, except one: I’m the prime minister of Israel, and I have to care for the survival of my country.  And Iran maintaining its nuclear weapons capability — That is the capacity to produce nuclear weapons — threatens directly the future of the Jewish state.  We’ve been around, the Jewish people, for about 4,000 years.  And we’re not about to let ayatollahs armed with nuclear weapons threaten that.

But I will that I don’t think it’s an Israeli issue, either.  You know, I — I can tell you, and it’s no secret, that many of the Arab leaders around us have the same view that I have.  And I always suggest to foreign leaders, to world leaders, when Israelis and Arabs are saying the same thing, that doesn’t happen very often.  It’s worthwhile paying attention.  We’re here.  We’re close to Iran, and we understand what Iran is doing.

CROWLEY:  Mr. Prime Minister, if a deal should be reached that is not to your liking, and it sounds like no interim deal; that you want the whole thing, complete destruction of what they already have, as well as inspections to make sure they don’t start up again.  If a deal is reached that is more along the lines of what this president is pushing for, what is Israel’s next move?

NETANYAHU:  Well, I hope that we can achieve a far better deal, but the president and I have agreed on many things, and we agree that Israel always reserves the right to defend itself against any threat.

And I would say I don’t advocate partial deals.  I think partial deals are bad deals.  But for those who do, I’ve said — and I’ve said this to the United States government and to the other P5+1 governments.  If you want to do a partial deal, then decide what the final deal is, and then do one step.  Decide that the final deal will actually implement the very terms that you, the P5+1, have put in the Security Council resolution.  Namely, that Iran dismantle all its centrifuges and the plutonium reactor, which are used only for one thing: to make nuclear weapons.

CROWLEY:  Let me turn you to another subject that we have talked about over the years many times, and that is the Israeli-Palestinian peace talks, which sort of seem to have gotten jump-started this summer.  But now, a chief Palestinian negotiator has described those talks as frozen.

Tell me your description of where these talks are.

NETANYAHU:  Well, I hope that we can get them finally to an agreement, because we need peace.

CROWLEY:  Are they frozen now, though?

NETANYAHU:  But peace is a two-way street.  It must require — it requires Palestinian concessions alongside Israeli ones.

But I will say that the real question is do the Palestinians want peace with Israel?  Do they want a state next to Israel in order to continue the conflict?  Or are they willing to finally end the conflict?  That’s what we dream about.

And by the way, that’s what we dream about with everyone.  We’d like to see it with Iran, too.  Anyone who’s been at war, to war, like I’ve been, who’s lost loved ones, who’s been wounded in military action, believe me: you don’t want war, but you want a real peace.  A real peace in this case means a real peace with the Palestinians in which they recognize the Jewish state.

And a real peaceful solution with Iran, which I and Secretary Kerry wants and President Obama wants, we all want the same thing.  I think we have to be very clear on how we get it.  To get it, we have to make sure that Iran doesn’t have the capacity to make nuclear bombs.  Unfortunately, with the proposed deal, they get to maintain that capacity.  And I think that doesn’t bode well for peace.

CROWLEY:  Prime Minister Benjamin Netanyahu, thanks for joining us this morning.