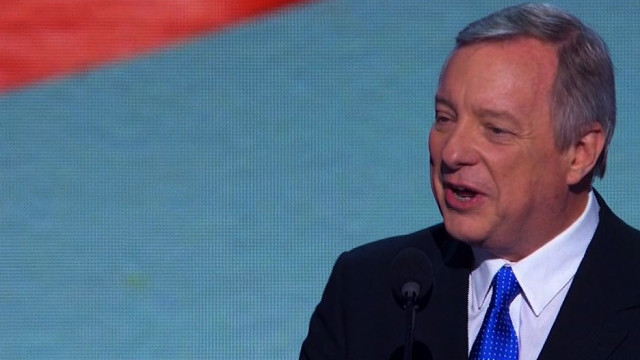 Sen. Durbin: “It’s conceivable” that some aspect of Obamacare could be included in funding bill; will negotiate on medical device tax

Senator Dick Durbin (D-IL) told “New Day” Anchor Kate Bolduan that Democrats can negotiate on the Affordable Care Act’s medical device tax to get a continuing resolution passed by the House, urging Speaker John Boehner to call the funding bill to the House floor for a vote. Senator Durbin also said he hopes that the shutdown, which is “unbefitting,” lasts less than one day.

“We think that enough moderate Republicans are starting to stand up and speak out in the Senate and in the House. They reject the Ted Cruz, Tea Party devastating approach to dealing with this issue. They want to be responsible legislators,” Senator Durbin said. “Even if they don’t like Obamacare, they don’t want to see a shutdown, this kind of spiteful strategy that we’re in the midst of right now.”

On negotiating with Republicans over the Affordable Care Act, Senator Durbin said, “We can work out something, I believe, on the medical device tax. That was one of the proposals from the Republicans. As long as we replace the revenue so that we don’t put a hole in our deficit and respond to this in a responsible fashion. That’s one thing the Republicans want to talk about it. Let’s sit down, and put that on the table.”