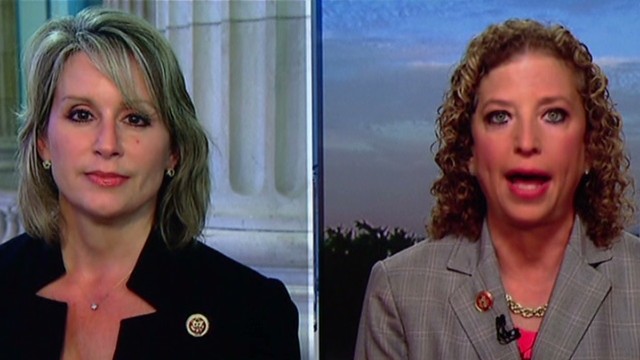 Rep. Debbie Wasserman Schultz (D-FL) and Rep. Renee Ellmers (R-NC) appear on “New Day” to discuss the potential of a government shutdown if Democrats and Republicans do not come up with an agreement by the end of the day. Rep. Ellmers told Anchor Chris Cuomo that his question of whether or not it’s right that Congress would still get paid if there was a government shutdown is “moot” because Congress is “not going to shut down the government.” Later in the interview, Cuomo could not get an answer from Rep. Ellmers on if House Republicans will present a bill to fund the government that doesn’t involve Obamacare. Rep. Wasserman Schultz stated that the she wanted a “clean” continuing resolution to pass to fund the government now and vowed to work with Republicans later on problems that will “inevitably arise” with Obamacare.

Cuomo told Rep. Ellmers “no answer from you” when she said that she couldn’t speculate on whether or not a bill will come through from the House that doesn’t involve Obamacare but involves funding the government.

“We don’t control what action happens in the House of Representatives. But what I can tell you is that a bill will come back from the United States Senate without anything related to Obamacare to keep the government functioning; to make sure that we don’t hamper our economy and hold the economy hostage,” Rep. Wasserman Schultz said. “And the Republicans have the ability to put it on the House floor and allow 218 members to vote on it together and make sure that we can keep the government functioning. And to her point on the debt ceiling, that’s even worse. So the next fight, is we’re going to be arguing over whether or not we hold the economy hostage and not pay the nation’s bill, jeopardizing the full faith and credit of the United States. All in the name of the Republicans being hell bent on stopping everyone in America from having healthcare. It’s irrational.”