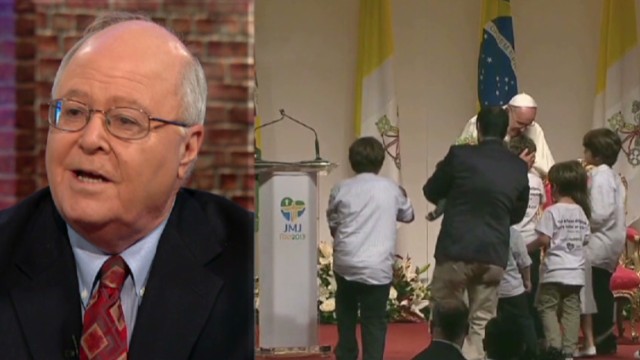 In light of Pope Francis’ interview that included his views on gays and women, “New Day” Anchor Chris Cuomo asked The Catholic League President Bill Donohue if his views counter the Pope’s new direction for the Church. Cuomo points out that Donohue’s comments in the recent past about homosexuality and those who work in Hollywood may not fall in line with the Pope’s vision.

Cuomo said, “You have bashed on these issues for years and years. Most infamously, recently, saying that the Church had a homosexual problem, not a pedophile problem. I mean really incendiary, flagrant, divisive stuff…. You’re saying you won’t do that anymore?”

Donohue replied, “Oh no, I will always tell the truth –“

When Donohue asked Cuomo if he thinks he “made up those figures,” Cuomo replied, “I think you’re parsing them, I think you’re cherry-picking them and I think that the most important part is your motivation. You just heard what the Pope said. Why wouldn’t you try to move past this parsing rhetoric and try to be what your church is supposed to be about?”

Cuomo told Donohue that he thinks the Pope is giving a message of love and understanding, adding that the Pope may think – ‘Jesus wasn’t about what you’re doing right now.’

“So you think the nuns on the bus that are bringing everybody together by going out there in favor of Obamacare against what the Bishops want. They’re the ones who are divisive, typically on the left, but not exclusively,” Donahue said.

Cuomo responded, “I’m thinking what he wants is for you to spend less time bashing nuns….”