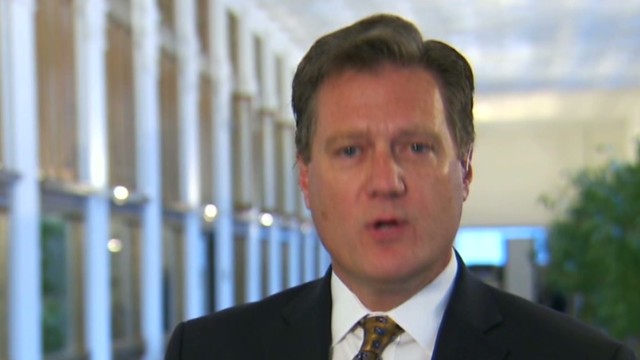 Rep. Turner: President is wrong on Syria, but Boehner, Cantor “feel an obligation to support him”

Rep. Mike Turner (R-OH), member of House Armed Services Committee, explained to “New Day” Anchor Kate Bolduan why he is against the administration’s military plan against the Syrian regime over chemical weapons. When Bolduan asked him if the sequester on defense spending, one of his reasons for not supporting military action, is a good enough reason, Rep. Turner said that it shows President’s “lack of leadership,” while acknowledging that the United States is “certainly capable” to carry out an attack. Although he thinks the President is wrong on the issue of Syria, he said he believes House Speaker John Boehner and House Majority Leader Eric Cantor “feel an obligation to support him.”

“… The President [Obama] has no strategy. He cannot tell us who we’re for. He cannot tell us the risks. Also, he has an unexplainable policy with his imaginary red line,” Rep. Turner said. “But even more importantly, he has shown no leadership in trying to set aside his sequestration, which is having devastating impacts on our military, over 12,000 people in my community were furloughed. As sequestration continues to put financial pressure on the Department of Defense, the President wants to take us into this conflict.”

After Rep. Turner said that force military cuts are part of the reason for not backing military action in Syria, Bolduan asked if he thinks the military is not capable of the military action because of the sequester. Rep. Turner replied, “We’re certainly capable, but it’s certainly not the right thing to do. If the President’s going to show leadership, he should show leadership by saying let’s fully fund the Department of Defense.”