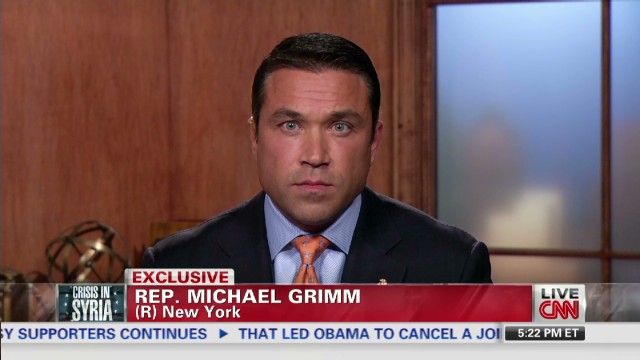 VIDEO: Rep. Grimm to CNN’s Jessica Yellin on Syria, “…a strike is no longer going to give us the credibility…”

Today on CNN’s The Situation Room with Wolf Blitzer, Rep. Michael Grimm (R-NY) joined the program to explain why he withdrew his Syria support. A highlight from the interview is after the jump and a full transcript will be posted on http://archives.cnn.com/TRANSCRIPTS/sitroom.html.

YELLIN: Congressman, you heard that. After all that, we were shocked today to hear you’ve changed your mind.  So, you’re now withdrawing your support.  What happened?

The other thing is the president and the administration has failed to really exactly what the plan, what the goal is. And that’s a big problem for me.  We have to know exactly what we’re doing, what — how we’re striking, and to what end. And they have failed to do that.

YELLIN: OK, Congressman. And all of this was true 72 hours ago when you said that Congress was, quote, “obligated to support our president.”  None of that has changed in the last three days.

GRIMM: Actually, I disagree.  I don’t think all that is true. I think first of all, time is of the essence with issues like this.  I completely disagree with the president. I said that on air. I disagree with him thinking that it doesn’t take time —

GRIMM: Well, sure. I think the president has started to backtrack on his own word. Remember, he now just came out and said it was not his red line, that it was the international red line.  So, when I see the president backtracking on what he said and what I was relying on to back him, that obviously is a big concern for me.

The other thing is in the last 72 hours, none of our allies have stepped up.  I was expecting the president to be able to build a coalition around this. Because quite frankly, Secretary Kerry gave an outstanding speech. Really, I think, captured the heart of America, realizing what we needed to do. And now all of that seems to be —