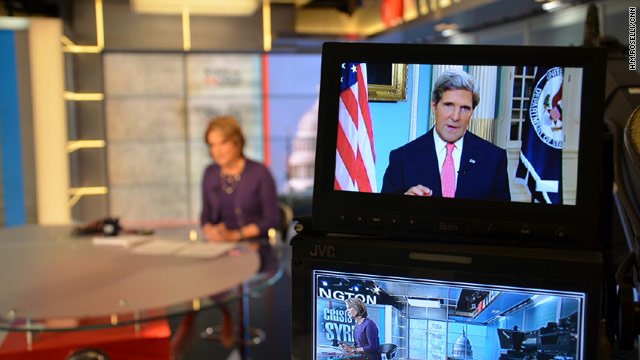 Secretary Kerry on State of the Union: “blood and hair samples… tested positive for signatures of sarin”

Today on a special edition of CNN’s State of the Union with Candy Crowley, guest anchor Gloria Borger spoke with Secretary of State John Kerry about the crisis in Syria. Kerry told CNN, “blood and hair samples that have come to us through an appropriate chain of custody, from east Damascus, from first responders, it has tested positive for signatures of sarin.” A full transcript is after the jump. BORGER:  Mr. Secretary, thank you so much for being with us this morning.  I have to say that it was a surprise yesterday when the president announced that he was going to seek congressional approval for military action in Syria.  Can you tell us now whether this administration is prepared to act, even if Congress votes no?

KERRY:  Well, we don’t contemplate that the Congress is going to vote no, Gloria.  I believe this case is powerful and grows more powerful by the day.

I can share with you today that blood and hair samples that have come to us through an appropriate chain of custody, from east Damascus, from first responders, it has tested positive for signatures of sarin.  So each day that goes by, this case is even stronger.

So the case is really an overwhelming case.  But the president really felt very strongly that the Congress of the United States weighing in makes our nation stronger in whatever action we take.

BORGER:  But — but doesn’t it worry you that you have put this heavy responsibility on a Congress that is notoriously paralyzed and divided?

KERRY:  We have confidence — there are good people in the Congress of the United States.  I know there have been politically — it’s been difficult, but this is a matter of national security.  It’s a matter of the credibility of the United States of America.  It’s a matter of upholding the interests of our allies and friends in the region.  Jordan, which is threatened by what is happening.  Israel, Turkey, Lebanon, all of which, as I said the other day, are just a stiff breeze away from chemical weapons being used.

I mean, there are huge interests here.  And in the long term, Gloria, you know, what we may or may not have to do if we cannot find a peaceful resolution with Iran, well, what we need to do with North Korea, all of these things are part of a continuum of decision making —

KERRY:  — that is made in foreign policy, and we believe the Congress of the United States will recognize that responsibility and do what is right.

BORGER:  But, Mr. Secretary, the head of the Council on Foreign Relations, for example, says that, in fact, President Obama has gone — these are his words — from leading from behind to not leading by going to Congress.  He says that it raises doubts about the United States’ reliability and determination.  Can I get your response on that?

KERRY:  He has the right to do that, no matter what Congress does.  That is his right, and he asserted that in his comments yesterday.

But the president believes, and I hope we will prove to the world that we are stronger as a nation — our democracy is stronger — when we respect the rights of the Congress to also weigh in on this.  And since it is not an emergency overnight as we saw in a place like Libya, where people were about to be slaughtered, since we have the right to strike at any time, if Assad is foolish enough to engage in yet another attack, we believe that it is important before this takes place to have the full investment of the American people and of the Congress.

BORGER:  Well, what are you telling the Syrian opposition now, who was — they’re clearly counting on military action sooner rather than later, and now it’s been delayed.

KERRY:  Well, sometimes the wheels of democracy require us to take an extra day or two to provide the legitimacy that our founding fathers contemplated in actions that we take.  And I talked yesterday with the president of the Syrian opposition.  I believe he understands that America intends to act, that we are going to continue to support the opposition, that we may even, as a result of this, be able to provide greater support to the opposition and do a better job of helping the opposition to be able to continue to fight against the Assad regime.

I think that they will be stronger, we will be stronger in the end, and it’s amazing to me to see people suddenly standing up and taking such affront at the notion that Congress ought to weigh in.  I mean, I can hear the complaints that would have taken place if the president proceeded unilaterally —

KERRY:  And people said, well, why didn’t he take the time to consult.

BORGER:  But, Mr. Secretary, it seems, I think the questions are being raised because it seems that from the onset of this, over the last couple of weeks, it seems that the president was poised to take action sooner rather than later.  You came out and said, it matters if nothing is done —

KERRY:  It does matter.  Gloria, none of that has changed.  Every bit–

BORGER:  So why didn’t he decide to go to Congress immediately, if it was so constitutionally important?

KERRY:  Because the president needed to gather the evidence, and have asked me and others to make judgments, and ultimately to make the case to the American people.

BORGER:  Yet he concluded that he didn’t have enough political support in the country to go it alone that way?

KERRY:  Absolutely not.  The president of the United States asserted yesterday, you know, that he has the right, and I believe he has that right.  But the president made it, I think, a very courageous decision.  Just because he disappointed some people who thought — who thought — without any basis — that he was setting up to go take a strike, doesn’t mean that he didn’t reserve the right to make the judgment that he made.

I think it’s a — I personally believe, at a time when the institutions of governance are being doubted by many people, I think this is a very courageous decision.  I think it is a big presidential decision.  And no one should misinterpret it.

KERRY:  Particularly Assad or the opposition.

BORGER:  But it’s also risky, Mr. Secretary, isn’t it?  I mean, the risk is if Congress were — and I know you don’t expect this — but if Congress were to vote no, and then the president were to strike, wouldn’t that set up a constitutional crisis?

KERRY:  The president has the right, and he has asserted that right, that he could do what’s necessary to protect the national security of the United States at any point in time.  The president believes that we are stronger as a nation when we act together.  The branches of government that are designated with powers with respect to foreign policy.  And so, the president has made his decision, and he courageously went out yesterday and announced his decision to the nation and the world.

He believes that this — this outrageous attack by Assad merits the United States joining with others to stand up and defend the international norm with respect to the prohibition of the use of chemical weapons.  The president announced that decision, and now he has asked the Congress of the United States, representing the American people, to join in him — with him in that decision.

KERRY:  And we are stronger as a nation when that happens.

BORGER:  Let me ask you about our coalition.  When you were running for president in 2004, you said that in Iraq, we should not have relied on what you called a coalition of the few.  Isn’t that what we have here right now?

KERRY:  Well, I think we have a coalition of more than a few.  But this is a situation that is going to grow as the evidence comes out.  That’s another reason why the president believes there is a value in going through this process.

I’ve talked with a number of nations who have offered to be helpful.  No decisions have been made about what shape that will take.  But I believe that there are many — the Arab League has already spoken out.  Voices as far away as Japan, New Zealand, Australia, other places have spoken out.  I think the world takes enormous affront at this incredible abuse of power, this — this attack on decency and an incredible crime against humanity.  I think voices will grow over the next days as people see the evidence.

KERRY:  And that evidence is becoming more powerful every day —

KERRY:  As I’ve mentioned to you, we now have the additional evidence of the signatures of sarin gas from the first responders in Damascus.

KERRY:  No, this is independent.

KERRY:  This came to the United States, it’s independent.