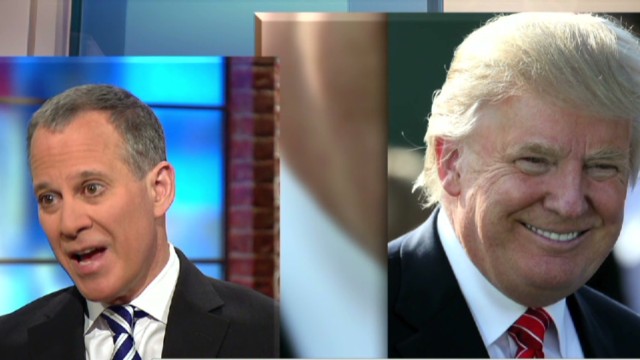 In a CNN live television exclusive, New York Attorney General Eric Schneiderman shot down “wild accusations” by Donald Trump in an interview with Anchor Chris Cuomo on “New Day.” Schneiderman denied he spoke to President Obama on Thursday about the lawsuit or Donald Trump and believes this case is “pretty straightforward.”

Later in the show, Donald Trump responded to the allegations saying that the charges are a publicity stunt and Schneiderman is “angry” that he didn’t get campaign contributions that he requested from Trump during the investigation. Schneiderman refuted this claim on “New Day.”

“We’ve been looking into for profit schools. We just had a $10 million settlement with another one a week or so ago. And we started looking at Trump University and discovered that it was a classic bait-and-switch scheme,” Schneiderman said. “It was a scam starting with the fact that it was not a university. They never registered…. Part of the charges are they lied to the State Department of Education repeatedly. They never got their teachers certified as required by New York law. They promised they were going to teach people with hand-picked experts by Donald Trump. The teachers were neither hand-picked nor experts. Some of them had actually just come out of bankruptcy from their real estate ventures.”

He added, “We’ve had the sworn testimony of the former president of Trump University….. Mr. Trump claims he wrote the curriculum and was very involved. So, he said it himself. But the president said that [Trump] insisted in seeing all the promotional materials. And [Trump] was the pitch man. He was in all of the videos. People came to the seminars thinking they were going to meet him. In fact, all they got was a chance to stand next to a life-sized poster of Mr. Trump to make it appear as though they had met him. He clearly was involved.”

Trump told Cuomo, “We have and had a great school. The school did a terrific job. 98% approval…. We sort of gave a report card on ourselves to every student who took the course…. People loved the school.” Trump confirmed that he would not take a settlement and will have students testify.