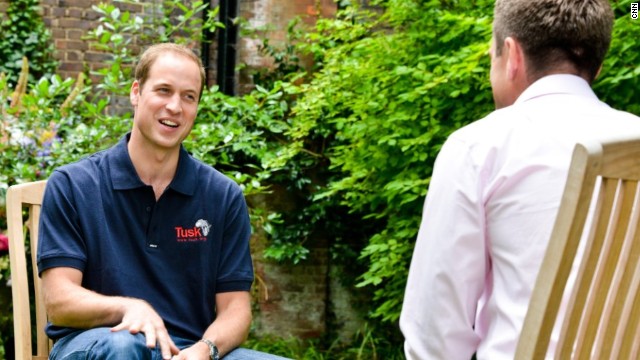 Today on New Day CNN’s Max Foster sat down with Prince William in his first interview since he and his wife the Duchess of Cambridge welcomed their first child, Prince George.  The Duke of Cambridge shared with Foster how things have changed for him since becoming a parent, saying “I think the last few weeks for me have been just a very different emotional experience.  Something I never thought I would feel myself.  And I find, again it’s only been a short period, but a lot of things affect me differently now. “

Prince William told Foster how he felt introducing Prince George to the world on the steps of Saint Mary’s Hospital “I think I was on such a high anyway, and so was Catherine about George that really we were happy to show him off to whoever wanted to see him.  As any new parent knows, you’re only too happy to show off your new child and, you know, proclaim that he is the best looking or the best everything.”   Asked if he was comfortable, Prince William said “it’s not somewhere I enjoy being, I know that the position I’m in that’s what’s required of me to do.” He went on to say  “it’s nice that people want to see George, so, you know – I’m just glad he wasn’t screaming his head off the whole way through.”

The envy of every father for getting his son into a car seat so easily, the Prince told Foster “Believe me, it wasn’t my first time.  And I know there’s been speculation about that.  I had to practice, I really did.”  On choosing to drive his family home himself, Prince William said, “Where I can be, I am as independent…as I want to be.” He added “I very much feel if I can do it myself, I want to do it myself.  And there are times where you can’t do it yourself and the system takes over or it’s appropriate to do things differently.  But, I think driving your son and your wife away from hospital was really important to me.”

The interview that aired was a preview of a one-hour documentary Prince William’s Passion:  New Hope, New Father airing on CNN September 15 at 10 pm ET.  The special chronicles the Prince’s passion for Africa and his dream to save the world’s most endangered species.  As a new father, Prince William discussed his hope that one day Prince George will experience the same Africa that he and Prince Harry did as young boys.  His own love for Africa was instilled in him by his father Prince Charles and his late mother Princess Diana.  Prince William tells Foster that he plans to start introducing Africa and its endangered species to his young son “I’ll have toy elephants and rhinos around the room.  We’ll cover it in sort of, you know, lots of bushes and things like that.  Make him grow up as if he’s in the bush.”