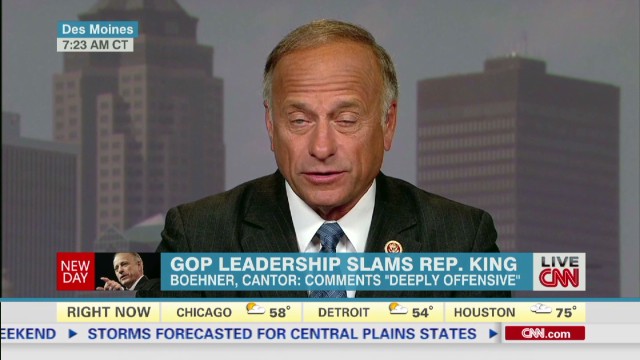 Rep. Steve King (R-IA) continued to defend his comments on immigration reform during an interview with New Day’s Kate Bolduan, explaining that most Republicans agreed with him before the presidential election, but are now cast under a “spell.” King claimed that Republicans are switching sides on immigration because they feel it’s tied to the decrease in Hispanic support. Later in the interview, he talked about exchanging words with CNN Political Contributor Ana Navarro.

“Last year, almost everybody in my conference would’ve agreed with me on this immigration issue,” Rep. King said. “And this year, it seems as though after the presidential election a spell’s been cast over a good number of Republicans and they seem to think the presidential election was about immigration. I’d ask them, find me that debate between Mitt Romney and Barack Obama that addressed immigration. I don’t remember it. I can’t find it. The election was about jobs and the economy, not immigration. And yet some Republican strategists and leadership have decided let’s just go ahead and debate immigration for twelve months and then we’ll see if we can solve the problem….”