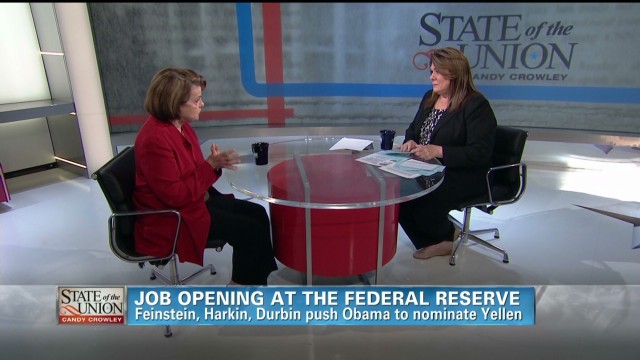 Sen. Feinstein on State of the Union calls for San Diego Mayor Bob Filner to resign

Today on CNN’s State of the Union with Candy Crowley, Senator Dianne Feinstein spoke about embattled San Diego Mayor Bob Filner, calling for his resignation. Feinstein also weighed in on the latest clashes in Egypt, U.S.-Russia relations in light of Edward Snowden’s status, and her support for the next chairman of the Federal Reserve. Highlighted excerpts are below, and a full transcript is after the jump. Additional embeddable video will be posted at http://www.CNN.com/SOTU.

ON SUPPORTING JANET YELLEN AS THE NEXT FED CHAIR:
FEINSTEIN: Well, I was asked to sign and I signed, because I have met Janet Yellen on two occasions. I have followed her. She’s very well thought of. She knows the fed, and she’s very highly qualified. And I think a woman as head of the Federal Reserve, a qualified woman, would be a very positive thing for this administration.

ON EDWARD SNOWDEN:
FEINSTEIN: “I would be very hopeful that President Putin still would decide to turn him over. I suspect this sort of temporary amnesty or refugee status is to give Russia time to really consider what’s in their best interests, and I think, if they think about it hard, what Snowden did, it’s not in their best interests… I think that Obama really ought to sit down when he can with Putin and make the case.”

CROWLEY: More than 70 demonstrators have been killed and more than a thousand injured this weekend in Egypt, all of it during clashes between the military installed government and its supporters versus backers of ousted President Mohamed Morsy.

In a written statement, secretary of state, John Kerry, said the United States urges an independent and impartial inquiry into the events of the last day and calls on all of Egypt’s leaders across the political spectrum to act immediately to help their country take a step back from the brink.

Joining me now is California senator, Dianne Feinstein. Thank you for joining us this morning, senator.

CROWLEY: I just get the feeling that the U.S., despite these strong military contacts we hear all about the time between Egypt’s military and the U.S. military, doesn’t have a lot of sway in Egypt when you watch what’s going on.

FEINSTEIN: Well, that may well be true, and I think this is a real point of definition of what kind of Egypt is going to come out of this. And, for the first time, I am very concerned. I’m surprised that the military would urge people to go to the streets. They had to have known, if they do that, the other side is going to respond, and it became kind of a catalyst for violence.

So, I don’t think we know what kind of Egypt is going to emerge. I think it’s very important for this new president and vice president to exert their authority now. It will show whether a democracy, in terms of civilian control of the military, can effectively govern that country. And so, the next few months, I think, are going to be real eye openers for the world.

CROWLEY: Senator, I just want to show a clip of recent what went on in the streets over the weekend. This is in Cairo, I believe. And again, we had more than 70 killed. We believe most of them killed by the military, which staged the coup of a democratically-elected president. As you know, when there is a coup of a democratically- elected leader, the U.S. generally can stop — stops aid. But here’s what the spokesperson for the secretary of state said this week.

JEN PSAKI, STATE DEPARTMENT SPOKESPERSON: The law does not require us to make a formal determination. That is a review that we have undergone as to whether a coup took place, and it is not in our national interests to make such a determination.

CROWLEY: So, if it made the determination there was a coup, we’d have to stop aid, and therefore, they’re just not going to make a determination because anybody plainly looking at this would say it was a coup. What does that say to the people fighting on the streets of Cairo about the U.S. and its values?

FEINSTEIN: Oh, I’m not sure it says anything to them candidly. You know, the region historically has been — there’ve been many coups. I think the administration has been right. It has stopped the F-16s from being sold. I think we need to relook. We’re right in the middle of the appropriations process now.

CROWLEY: Both were installed by the military.

FEINSTEIN: Failing that, I think you know what military will do now.

CROWLEY: Right. I mean, both those men that you mentioned who are now running Egypt were installed by the military.

FEINSTEIN: Well, that’s one thing, but acting is another thing, and they have to be —

CROWLEY: You want them to take charge of the military now?

CROWLEY: Do you think they can?

CROWLEY: And if they don’t, the U.S. needs to look at cutting off aid?

FEINSTEIN: Well, I think that may be the case.

CROWLEY: Let me move you to Russia, and Edward Snowden still in the airport, as far as we know, in Russia. The U.S. this week pushing very hard through the justice department saying, we’re not going to torture him. He won’t be subject to the death penalty. You need to hand him over. What are the chances that Russia’s going to hand over Edward Snowden?

FEINSTEIN: Well, it’s hard to tell. I know the president talked to President Putin. I would be very hopeful that President Putin still would decide to turn him over. I suspect this sort of temporary amnesty or refugee status is to give Russia time to really consider what’s in their best interests, and I think, if they think about it hard, what Snowden did, it’s not in their best interests.

And, Putin knows this. He’s run the KGB. He knows what intelligence is comprised of. And, I think, to harbor this man is one of two things, one, we want to get hold of this stuff, or, two, we really want to take the time to figure this out as to whether we should return him to the United States.

CROWLEY: Do you think should Putin decide to grant him asylum in Russia, that the president ought to go ahead and go to the G-20 in St. Petersburg, that he has to go ahead and have a unilateral meeting with President Putin in September?

FEINSTEIN: Well, I think — don’t think that’s a way necessarily to show — not to go does anything. I think that Obama really ought to sit down when he can with Putin and make the case. Here’s what this man did —

CROWLEY: Do you think he should still go to Putin?

FEINSTEIN: Here’s what this man did. By his own admission, he came to Booz Allen to be a contractor —

FEINSTEIN: I meant Snowden, yes. With the purpose of going in there and taking as much material as he possibly could. He took much more than I could possibly think he could. It’s very sensitive data. And then, he went and strategically placed it so that it could come out at different times.

Then, he went to two big cyber-intruding powers, China and Russia, and left China and went to Russia. You’ve got to ask why did he choose those two? You’ve got to also ask, do the Chinese have all this material? Do the Russians have it?

CROWLEY: Do we know?

CROWLEY: Let me move you on to something else. You recently signed a letter urging the president to let Janet Yellen, who’s currently number two at the Federal Reserve board, take over when Bernanke leaves. I want to play you just a little bit of my conversation With Treasury Secretary Lew, and I asked him about both Janet Yellen and Larry Summers, another name up for consideration.

LEW: Look, I know the people you’ve asked me about very well. They’re both friends, and I have great admiration for both of them. I’m going to keep the conversation about any future decisions here where it belongs.

CROWLEY: Would they both make good fed chair?

CROWLEY: It’s not exactly that they would both make a good fit?

LEW: I’m not going to comment on the fed.

CROWLEY: I’ll ask you the same question, would either Yellen or Summers make a good fed chair?

FEINSTEIN: Yes. It’s very hard for me to tell. Larry Summers had been very supportive of the era of deregulation, supporting derivatives and shorts and those kinds of thing. Janet Yellen has been close to Bernanke. I’m one that believes Bernanke has done a very good job. This country is moving ahead under partially Federal Reserve actions. And I think those ought to be continued for the foreseeable future. (CROSSTALK)

FEINSTEIN: I’m not pressuring him. I mean —

FEINSTEIN: Well, I was asked to sign and I signed, because I have met Janet Yellen on two occasions. I have followed her. She’s very well thought of. She knows the fed, and she’s very highly qualified. And I think a woman as head of the Federal Reserve, a qualified woman, would be a very positive thing for this administration.

CROWLEY: I want to turn to San Diego, Mayor Bob Filner, as you know, there’s been already a lawsuit against him, a number of women have come out and said that he sexually harassed them. He came out, basically said, yes, my behavior has been bad. I’m going to go into rehab for two weeks, but I’ll still stay as mayor and look at, you know, city business in the morning and in the evening. Should this man resign?

FEINSTEIN: Well, I think he should. I think he should. Of all people, Bob Filner knows what public life is like. He served a time in the House. Being the mayor of a big city, you’re a role model for people. You’re either inspirational to people or you aren’t. It’s a very tough job. And I don’t think that somebody who is lacking a moral compass really sets a role model or really will provide the kind of leadership that San Diegans want.

FEINSTEIN: This is up to them. This kind of absence of a moral compass is subject to recall. I suspect there will be recalls, and the people will judge.

CROWLEY: You think he should make it easier and resign?

FEINSTEIN: I think he should make it easier and resign, that’s right.

CROWLEY: Thank you so much.

CROWLEY: Senator Dianne Feinstein, come by any time. Thank you.